One of the concise views one can have of Berlin these days is from the top of the Devil’s Mountain (Teufelsberg), the artificial hill that consists of rubble from the ruins of World War II.

The conciseness decreases when stepping back, inside the structures on top of the former US listening station from the Cold War.

So we enter a place of fascinating decay and devastation that has become in its entirety a canvas.

The ruin as a design pattern for our self seems an aporia, but not so: as in many paradoxa, there is synthesis.

Descending further we witness that light and dark not only coexist, they require each other,

and they require a canvas.

Today we are taking the 2-dimensional floor plans of the Library of Babel  to the third dimension. The simplest way is to use a single floor plan and copy it for every level of the library. For instance, last time’s finite hexagon becomes a daunting infinite tower, at least in our imagination. 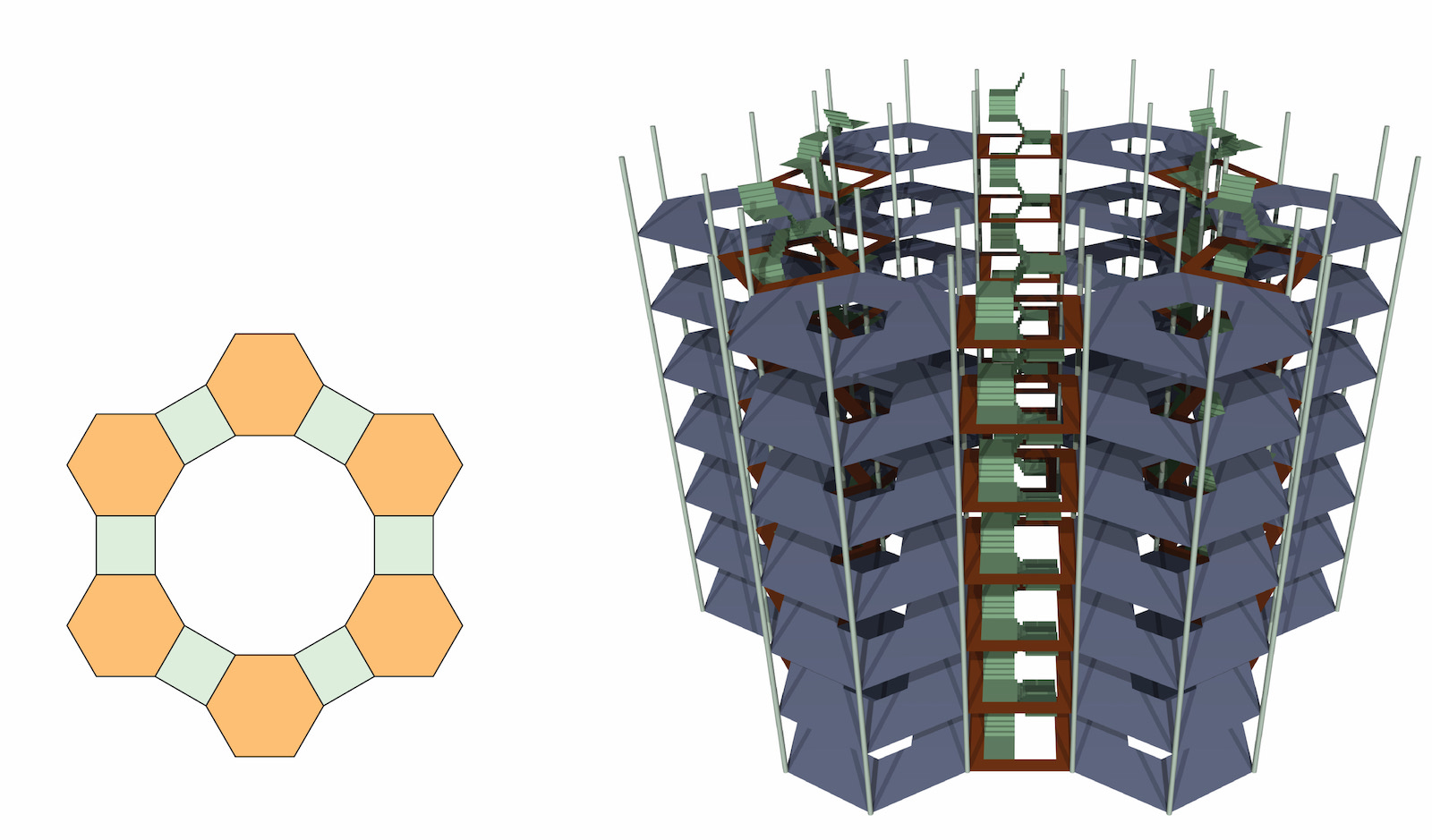 One could also do the same with several separate hexagons, but the resulting library would consist of several buildings, which, while not explicitly prohibited by Borges, seems unacceptable.

But there is another possibility. For instance, using the arrangement of hexagons in horizontal lines, and repeating them vertically (as on the left above), but then, on the second floor, using the same floor plan albeit rotated by 90º (as in the middle), and then repeating this periodically, we arrive at a single building where it is sometimes necessary to climb up, walk across, and then down again to reach a different room on the same floor.

Nearby places can sometimes be terribly far away.

In the double floor plan up above on the right we see that this can be done by aligning the vestibules in a square pattern, leaving star-shaped Voids. Below is a partial view of this magnificent library: 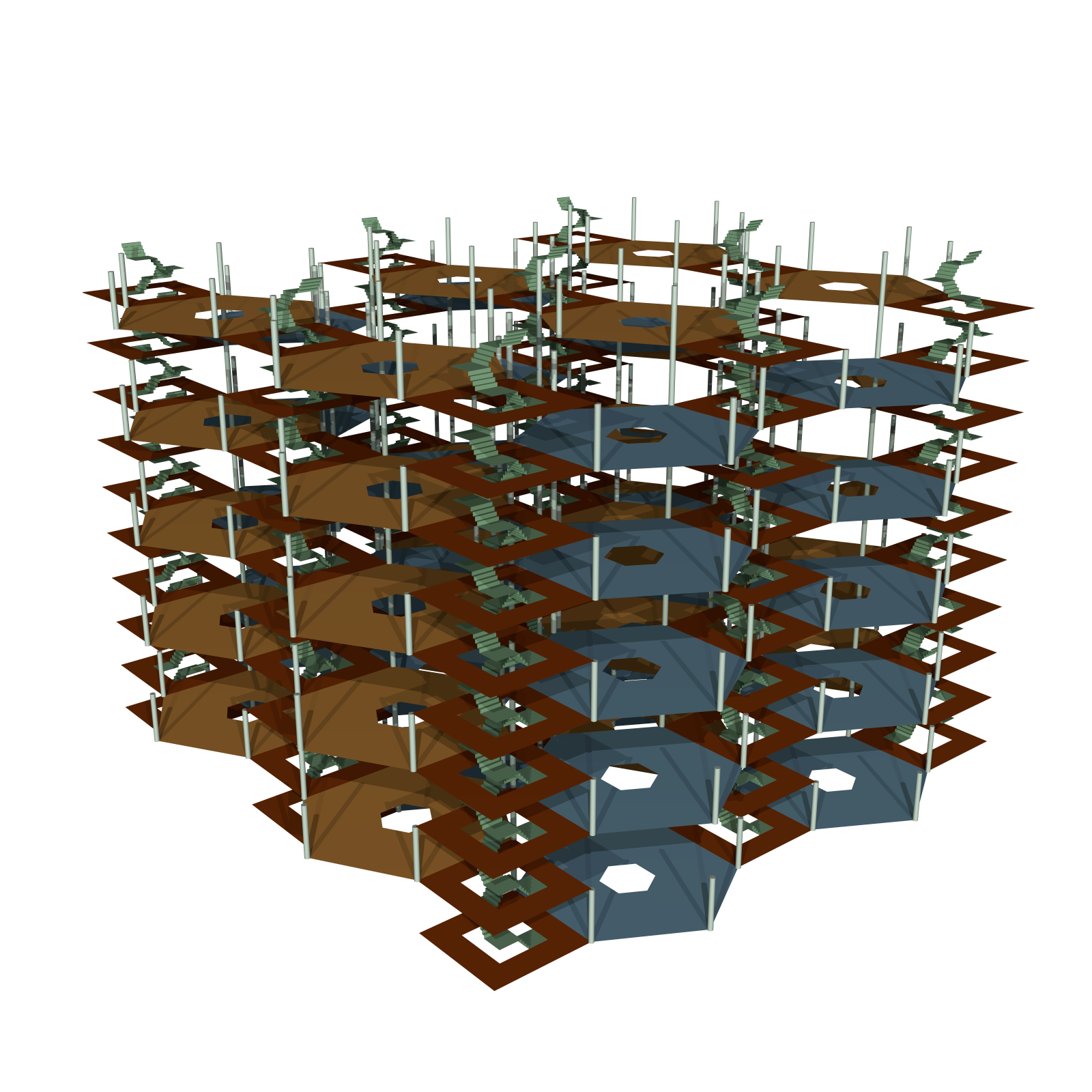 The condition that the staircases in the vestibules extend infinitely in both directions is quite limiting, even if one doesn’t require that each staircase can be reached at every floor. A good strategy for designing even more complicated libraries is to begin with a floor plan that includes hexagons and squares, and use on each floor a different subset of these squares and hexagons as vestibules and galleries. For instance, we can start with this Archimedean tiling that has large dodecagonal Voids:

One individual floor then could look like this, seemingly giving each gallery three exits to vestibules with staircases, one of which, however, will be blocked off by a bookshelf on two of its sides: 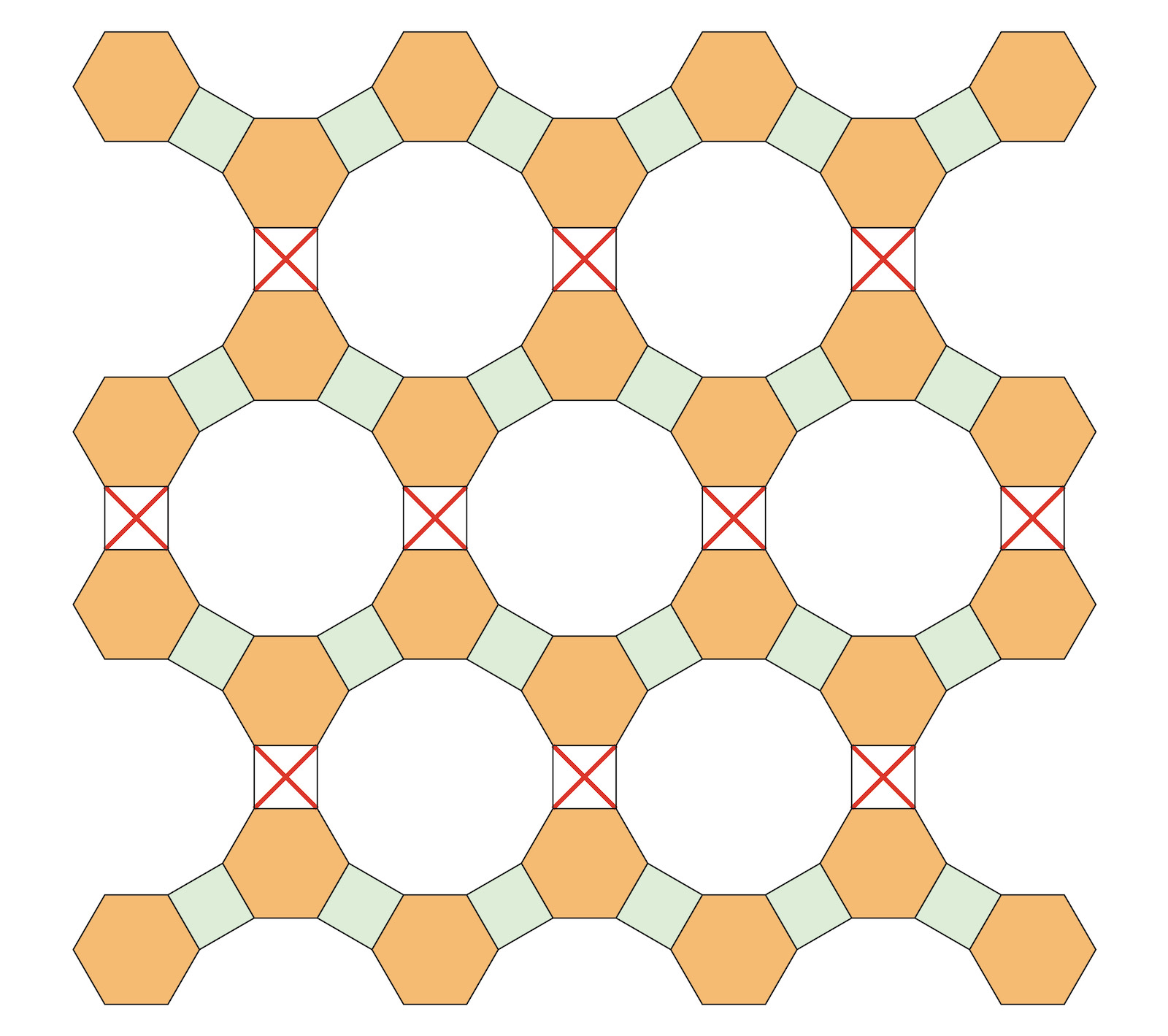 This floor plan will be rotated by 120º on each subsequent floor (about the center of one of the dodecagonal Voids), creating a single labyrinthian library.

Here is a deliciously maddening view into the resulting skeleton of this library. I haven’t closed off the inaccessible staircases yet, so please watch your step.

Happy are those of us who can get lost in a single book like in this Borgesian library.

Rooms without a view are prisons for the people who have to stay in them.

From Windows Overlooking Life in A Pattern Language by Christoper Alexander et al.

At the Notch trailhead and the Castle Trail trailhead there are two more short trails, the Window and the Door.

Windows offer a protected view, the exchange between inside and outside is virtual, and, like at the Window Trail, there is no safe way to step outside.

The Door is an entirely different story. And what Alexander writes about doors is valid also for our personal doors: Placing the main entrance is perhaps the single most important step you take during the evolution of a building plan.

On the map, the Door trail looks even shorter than the really very short Window trail, but the former does allow us to step outside into a vast landscape.

We instantly encounter unfamiliar heights, dangers, and the fear of getting lost.

So why should we step outside? What are the benefits of an encounter with the undesigned?

In essence, I think, this is a form of survival instinct. Life needs protection but doesn’t like confinement.

Tomorrow, we will begin to step outside — — —

… and in the pale light of the shadow we put together a house.

I usually prefer the early hours for taking pictures, and avoid the harsh daylight. 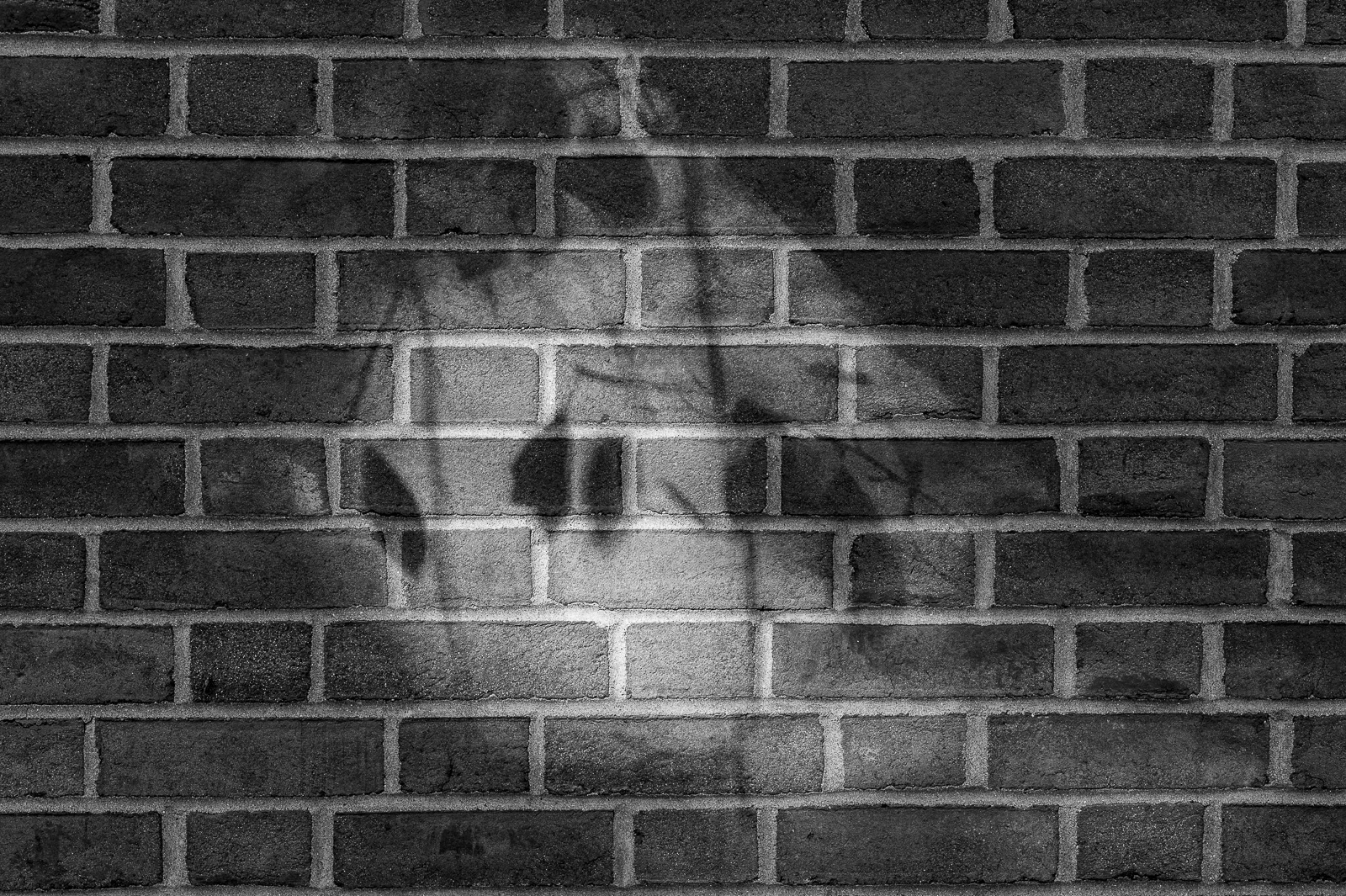 But light allows to objectify darkness, in form of a shadow. 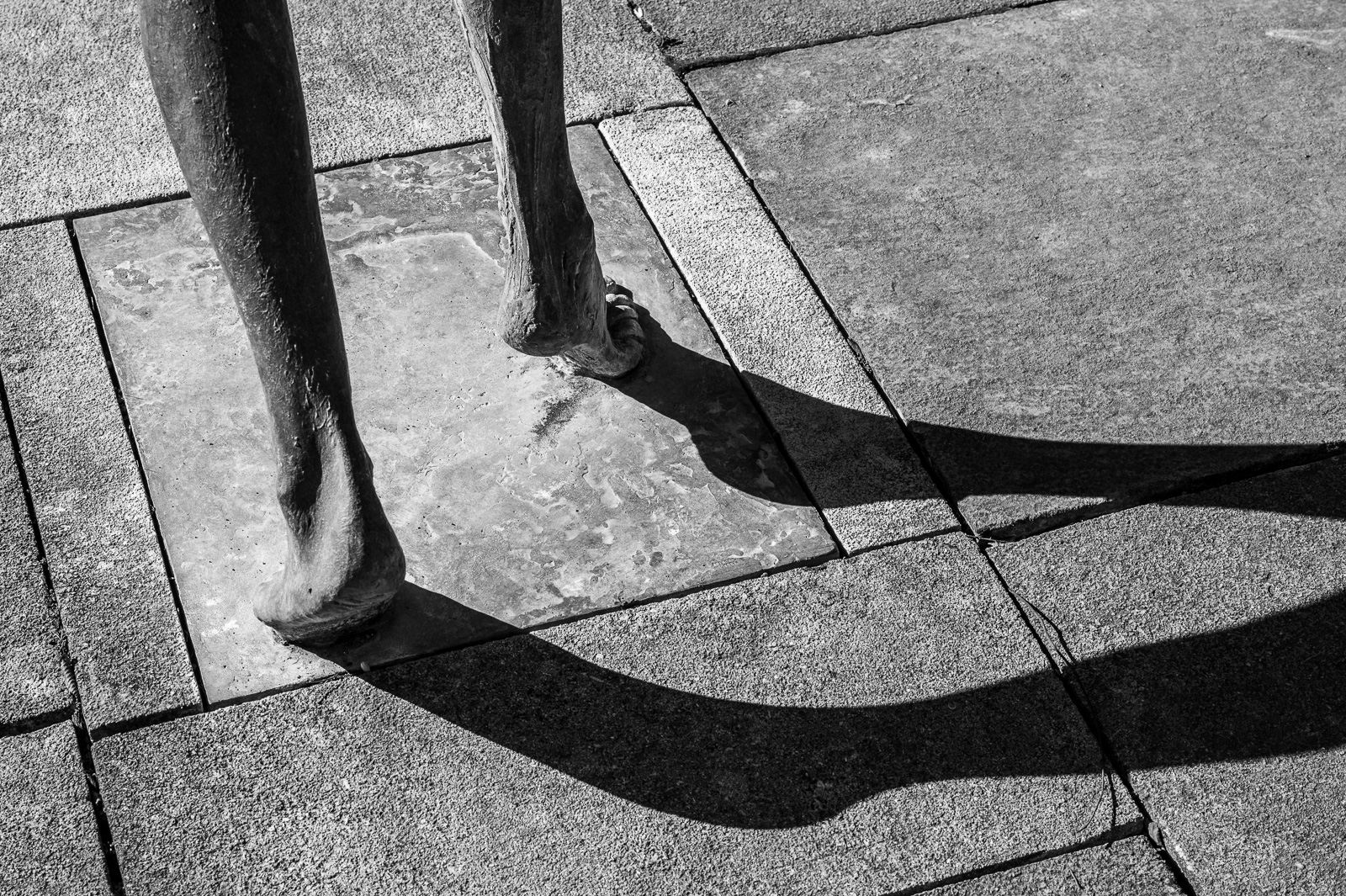 Sometimes it’s not so much the question what creates the shadow on the wall, but what lies behind the wall. 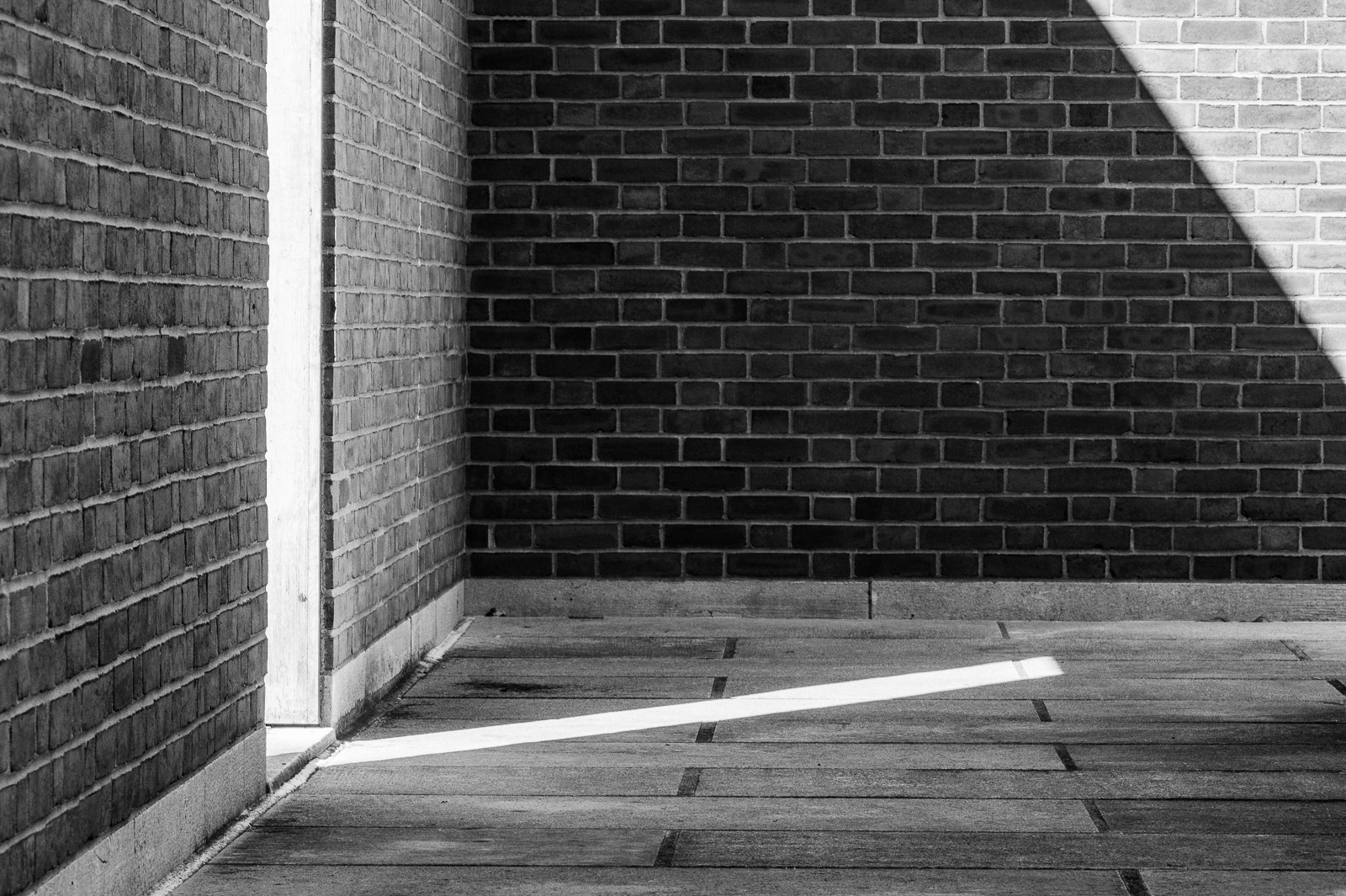 The interior (if there is one) should allow cause and effect to coexist.

Light and shadow are folded together.

But the gate is always open, which means that ultimately we have to leave again.

because there could be no mistakes…

When almost four years ago I congratulated You-Know-Who to his inauguration, I used pictures from the spectacular Tulip Trestle near Solesbury as an illustration. These days I have revisited this place, and it is as imposing as four years ago.

In the last two years, I have found in László Krasznahorkai’s books consolation for the state of the world and the human soul, and with the imminent beginning of winter, I decided to read his latest (and maybe last) novel Baron Wenckheim’s Homecoming. 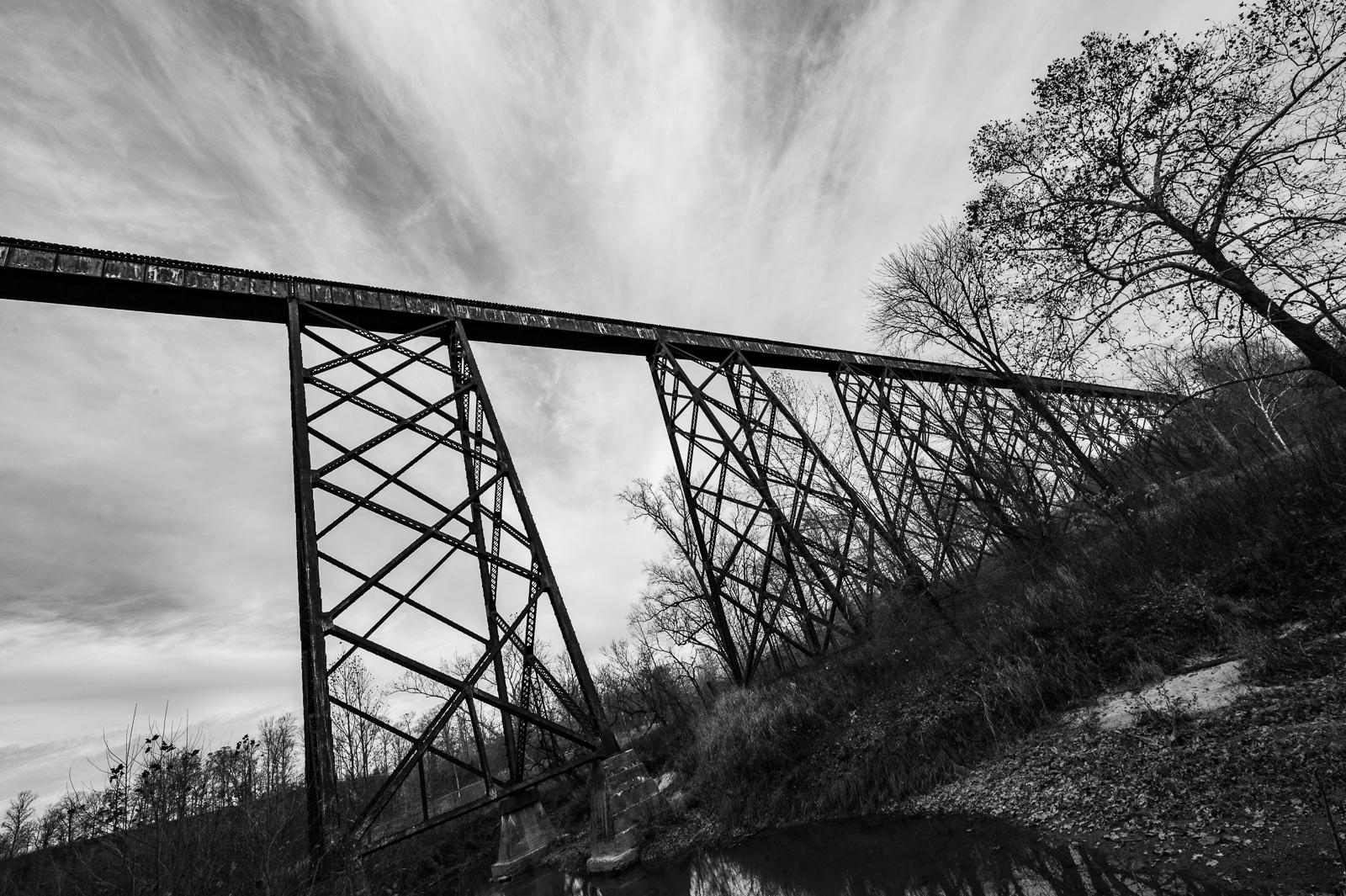 I also decided to do this as an excruciatingly slow read, and I will occasionally accompany my postings here with quotes from this book.

It begins with a brief chapter titled Warning, where an orchestra conductor imposes himself on his orchestra:

… because there’s only one method of performance here which can be executed in only one way, and the harmonization of those two elements will be decided by me …

But there is not just pure control, there also is purpose…

… because in reality what awaited them now was suffering, bitter, exhausting, and torturous work, when shortly (as the one single accomplishment of their cooperation, albeit an involuntary one), they would insert into Creation that for which they had been summoned; …

This brief chapter sums up  how a human being usurps what is not his to claim.

… because I am the one who, by the truth of God, is simply waiting for all of this to be over.

And I was moved to ask myself just what I could still manage to accomplish in the time left to me. 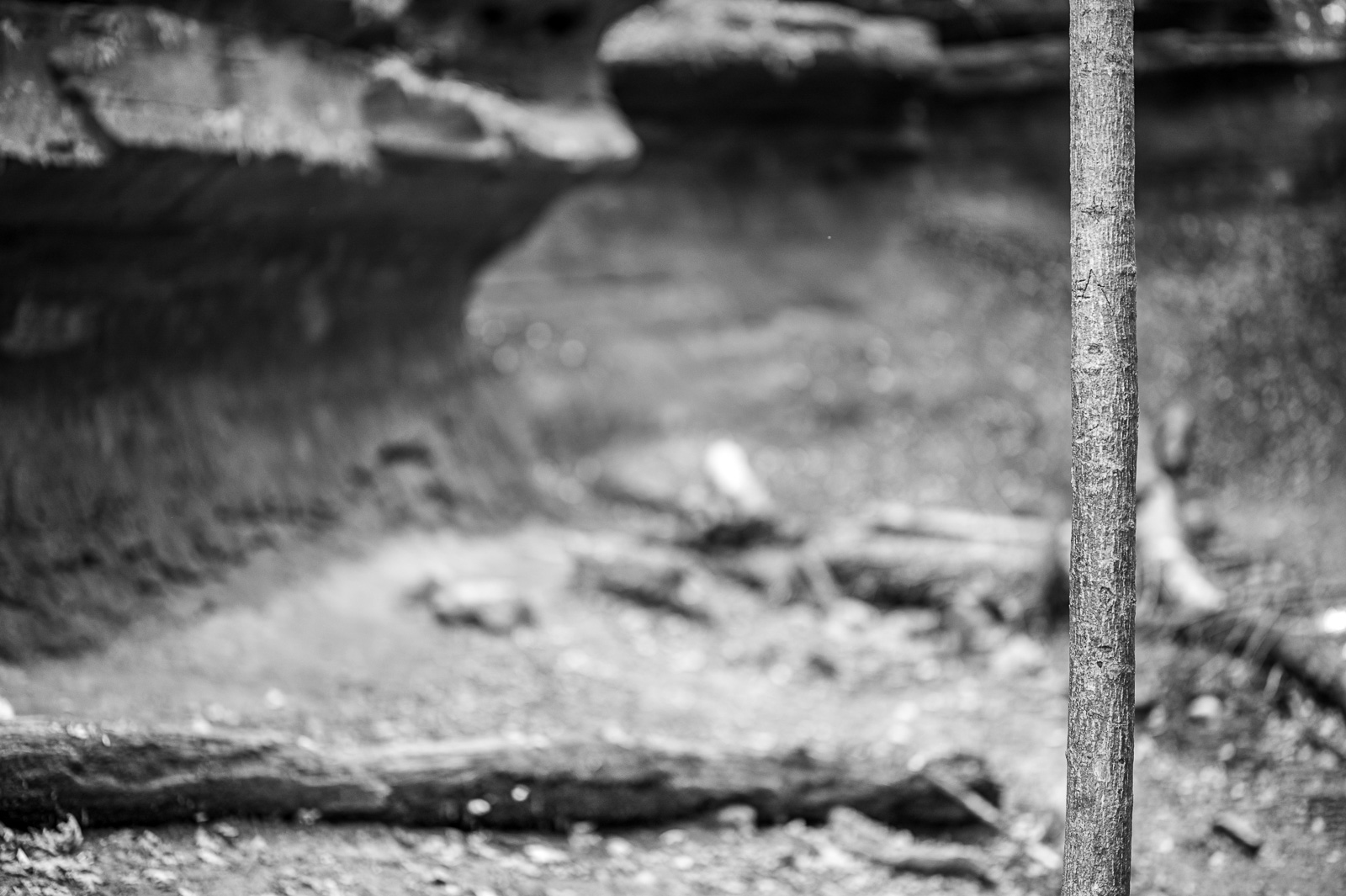 Thus Arvo Pärt about his composition Lamentate, a piano concerto of sorts, inspired by Marsyas, the enormous sculpture by Anish Kapoor.

Pärt’s Lamentate is, as the name suggest, not merely a lament but a call to arms, in order create a counterweight to the state of the world. Marsyas does this in its own way, too, in the form of a musical instrument filling all of space.

The short canyon in Shades State park that leads from Devil’s Punch Bowl to Silver Cascades Falls is such an oversized instrument in its own right, to be played by walking it.

The beginning is total silence.

But, even during the worst drought, there is a trickle of water, feeding the fall with bits of sound and hope.

Four years ago I attempted a prayer. 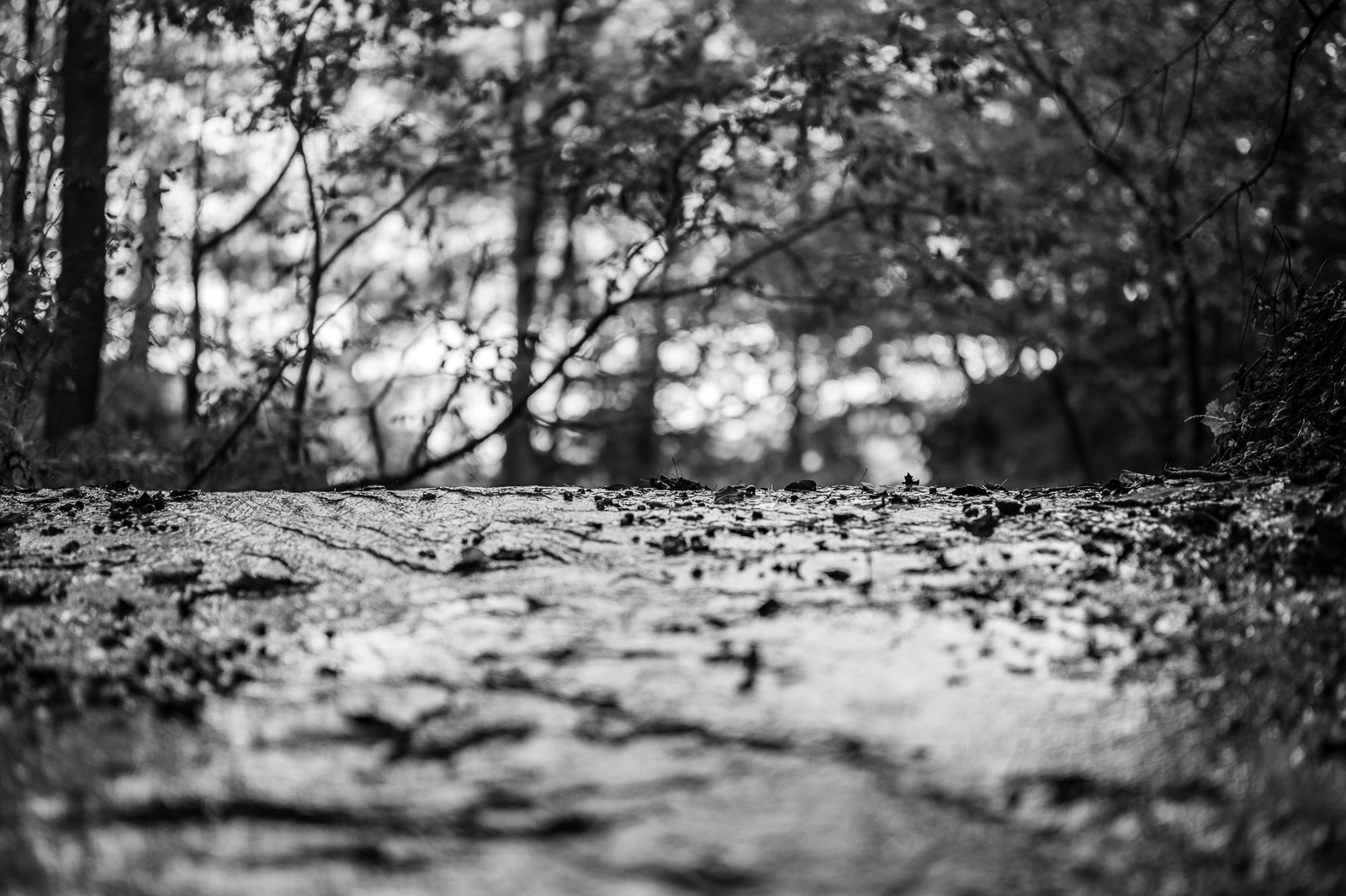 Quarries are magical places, offering us a dialogue with the past: Stone is patient.

Still, they are subject to change by nature or man.

Over time, the scars become habitats

and places of beauty — for whom?

So the title of a little book by László Krasznahorkai, better known for Sátántangó, and responsible for the stories behind a few of Béla Tarr’s films.

Main protagonist is the grandson of Prince Genji, who is visiting a monastery near Kyoto. 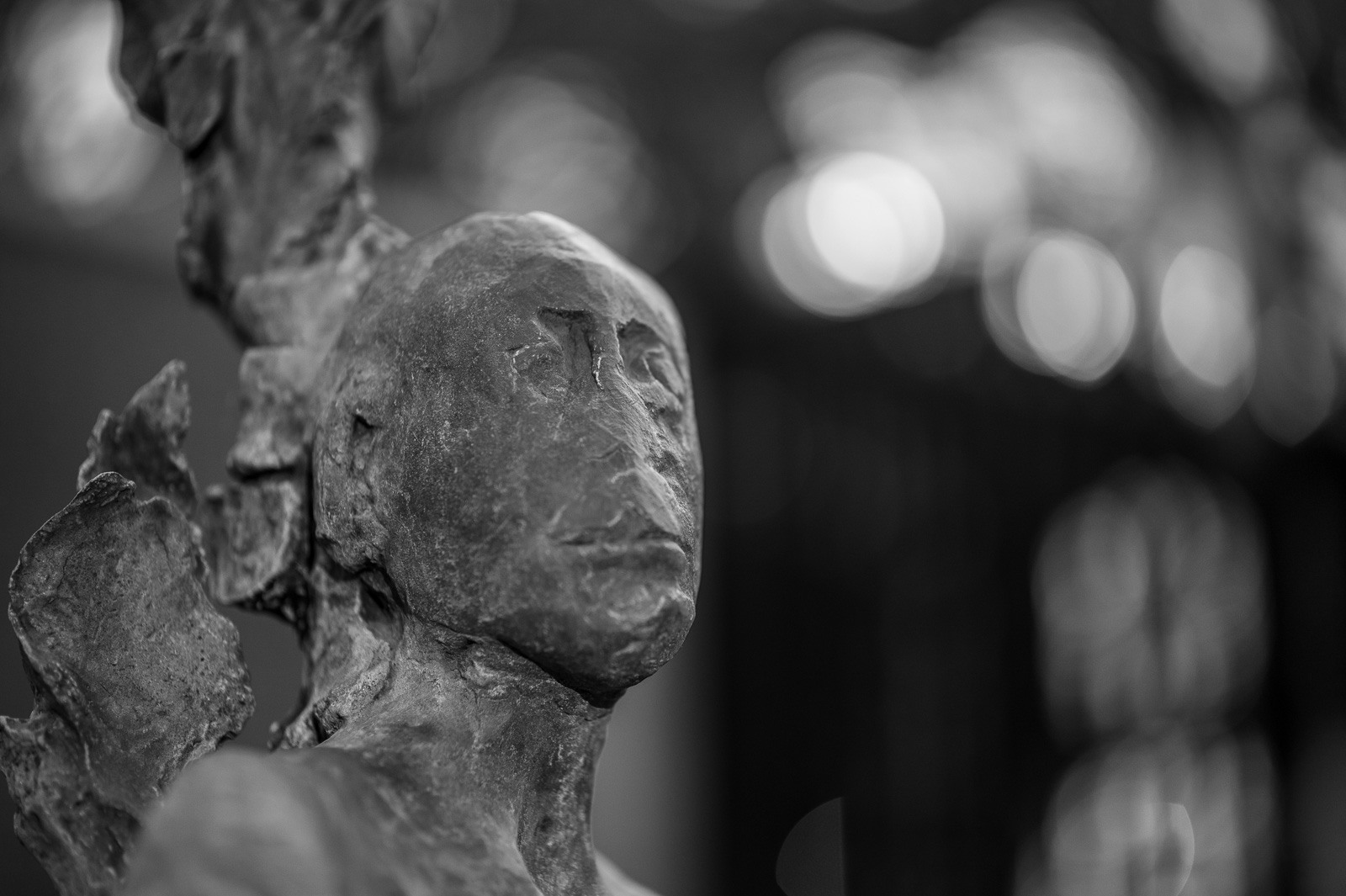 In 49 short chapters, we get a tour, both of the monastery, and of what the grandson perceives. Everything is treacherous.

It is as if the visitor and the place are resisting their fictionality: Their possibility is enough to contemplate how place and visitor react to each other.

Physical reality becomes secondary, what counts is the permanence of the imagination.

After looking at the mining facility near the Columbia Mine Preserve from the outside last week, now it’s time to step inside.

This is already the second floor, from a total of six. Thanks to the broken windows, the wind has done a decent job cleaning the place.

Moving up. This feels like one of these dungeon computer games where you have to deal with cute monsters on the way up (or down). I am pretty sure I know where the undead from the three (!) cemeteries I passed on the way spend their free nights. 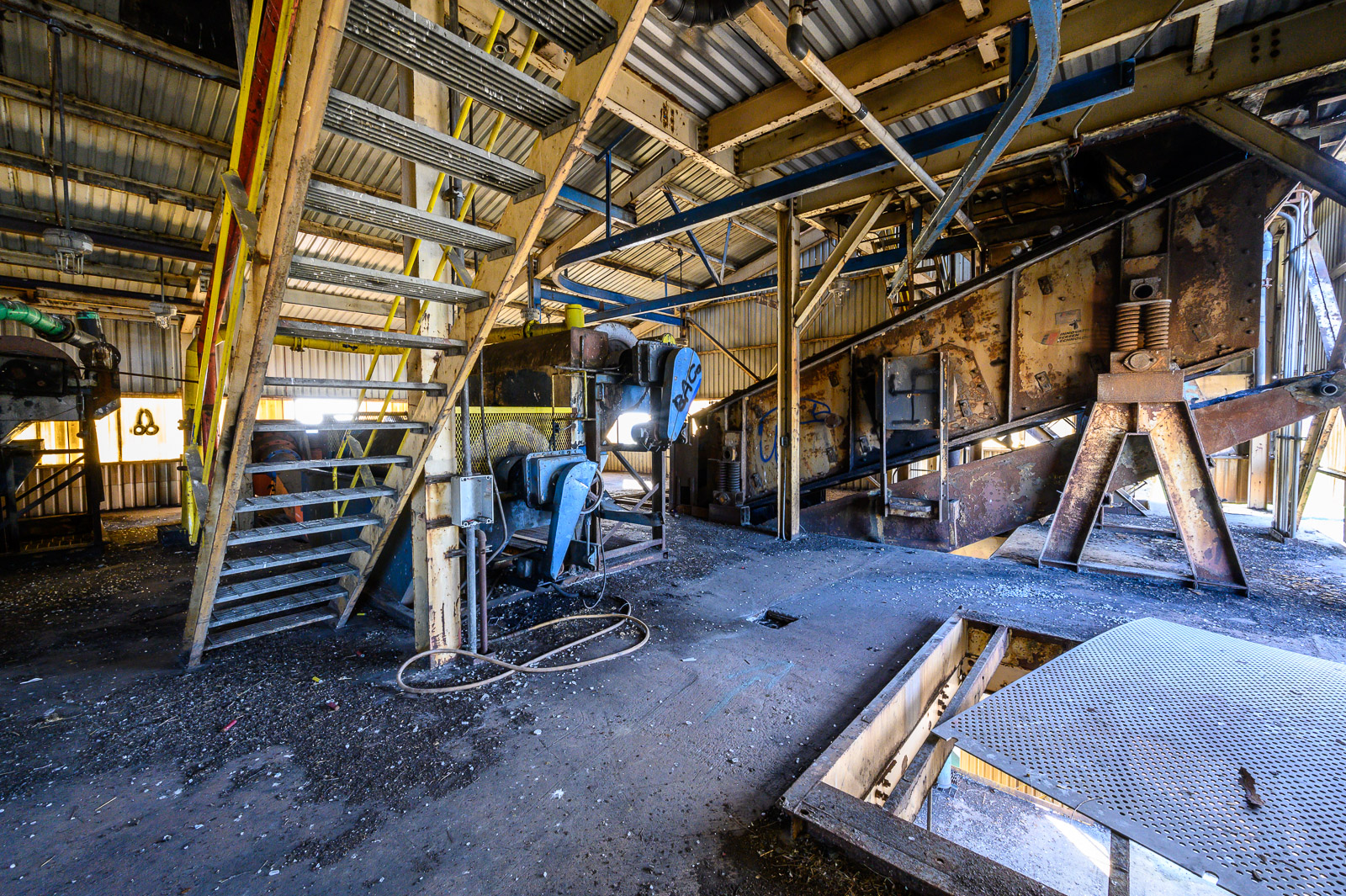 Further up. It also reminds me of Snakes and Ladders. One misstep, and you have to start climbing all over again, if you can.

The eeriest part of the place is the sound. Birds have conquered it, and the sounds they make are surprisingly close to human chatter. Maybe this place is some sort of temple for them.

It also feels like I am an exploring some alien space ship. I have absolutely no clue what these enormous machines were used for. 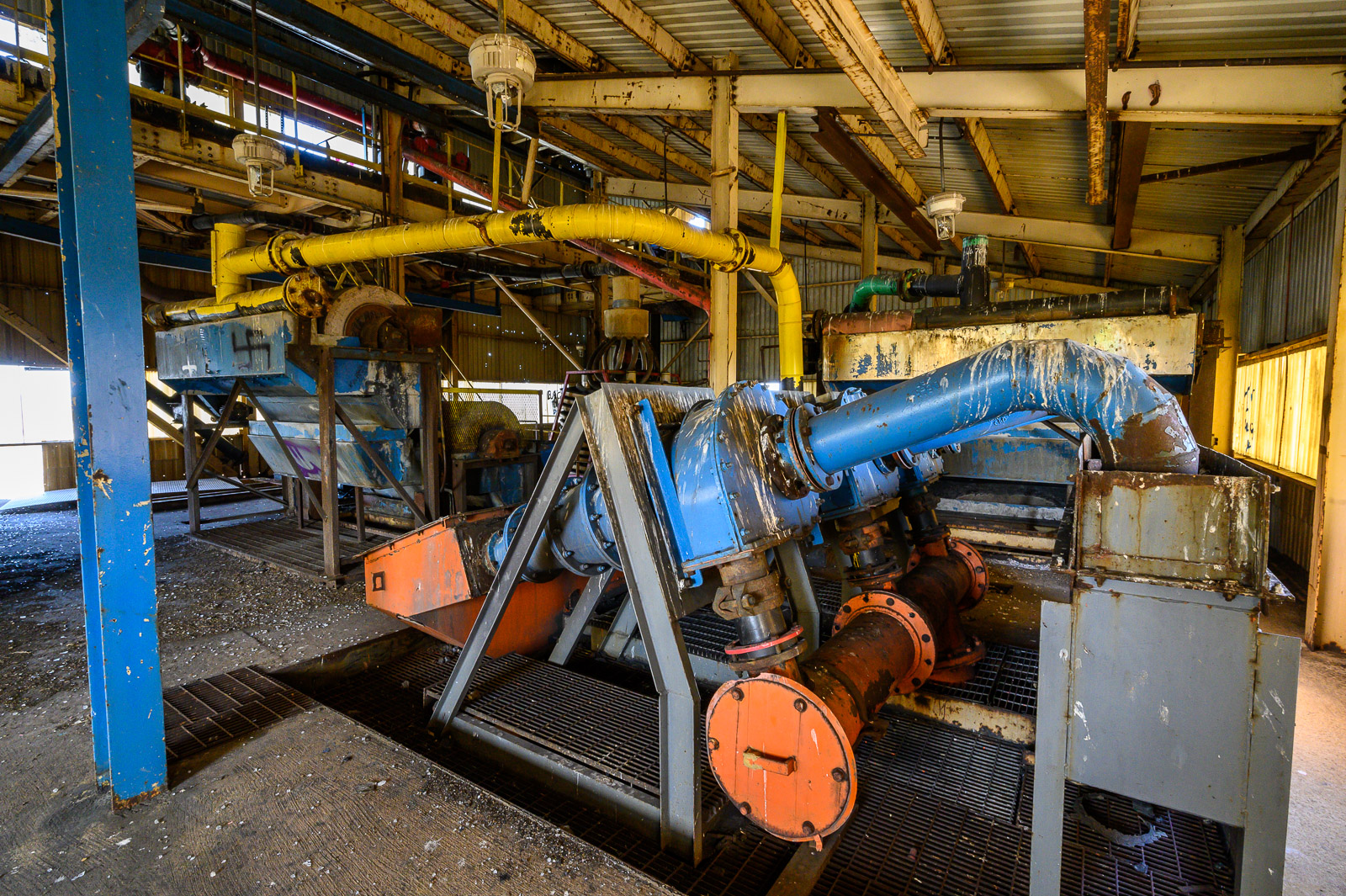 Not only birds have left their stains. Monsters, undead, animals, aliens — what do we fear most?

Down again, unharmed. Two decades ago, this place was busy with people who worked there. Where are they now, what are their stories?

Spring last year, on my way back from New Harmony, I made a small detour to the Columbia Mine Preserve. The Vigo Coal Company mined the area in the 1990, then filled the holes, and let it sit. The Sycamore Land Trust acquired the area, turned it into a nature preserve, which is now part of Patoka River National Wildlife Refuge.

Last year the early warm weather didn’t encourage any good pictures, so I decided to return a bit earlier, to catch the gloomy Indiana winter. When I entered Patoka River National Wildlife Refuge into my GPS, it took me to a dead end just outside the refuge, but I passed this wonderful relic on the way.

About six floors tall, this structure was apparently used to do something to the coal before it was used to enrich our atmosphere with carbon dioxide.

I am also clueless about the purpose of this truck, and why it looks so unhappy.

This time, the door was missing, so again I couldn’t resist the temptation. There was quite a bit to explore inside, so I leave this as a teaser for next week: 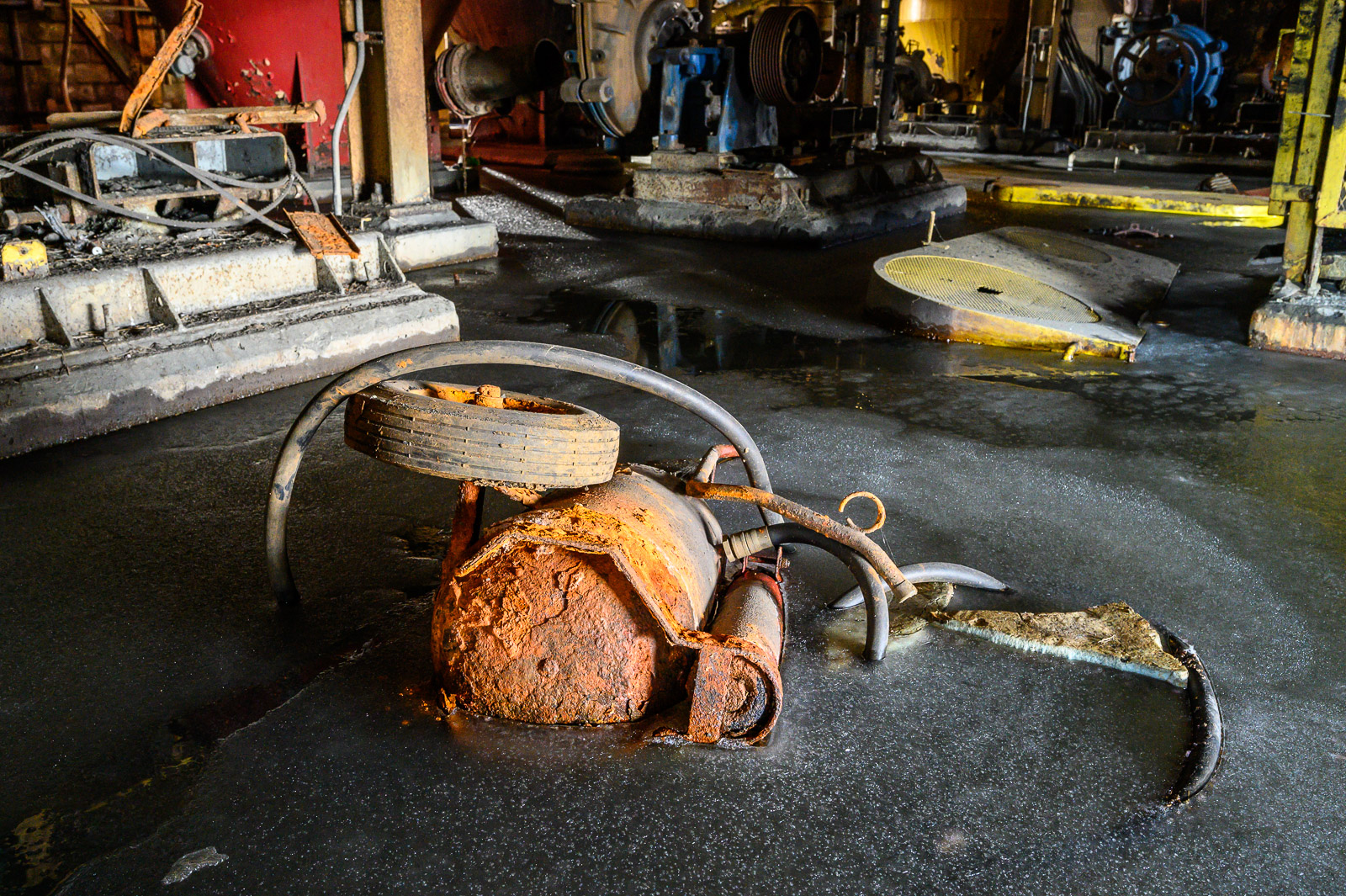