After the invasion of Granada in 1492 by King Ferdinand II and Queen Isabella I, things changed in Granada. 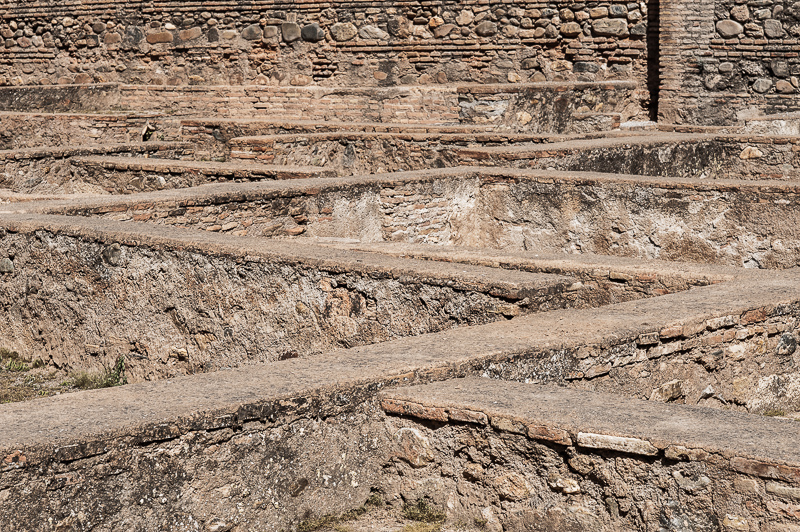 One can debate how liberal the emirate had been, but it certainly didn’t get better. Whenever choices become limited,life does not necessarily become easier.

Today, we have a choice. We can face reality with clarity, like the cathedral of Granada, built over the ruins of its former mosque. 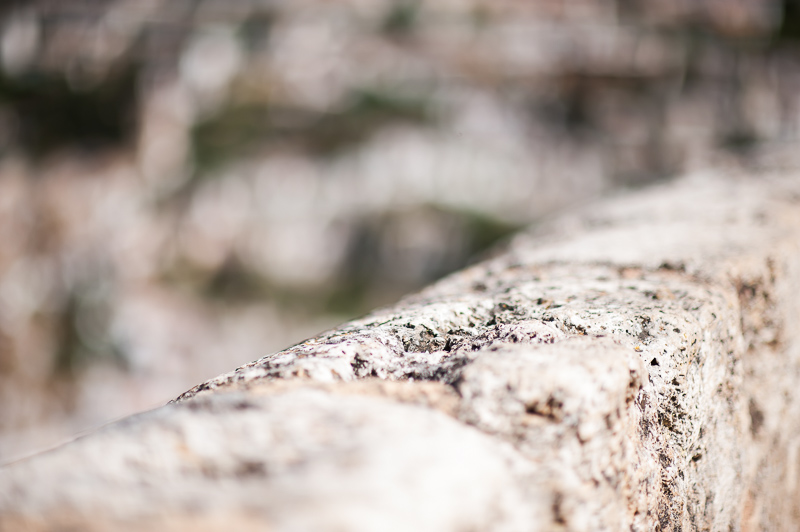 Or we can prefer the blurred view over the remaining walls of the Alhambra.

For the moment, it’s maybe best to keep gardening. 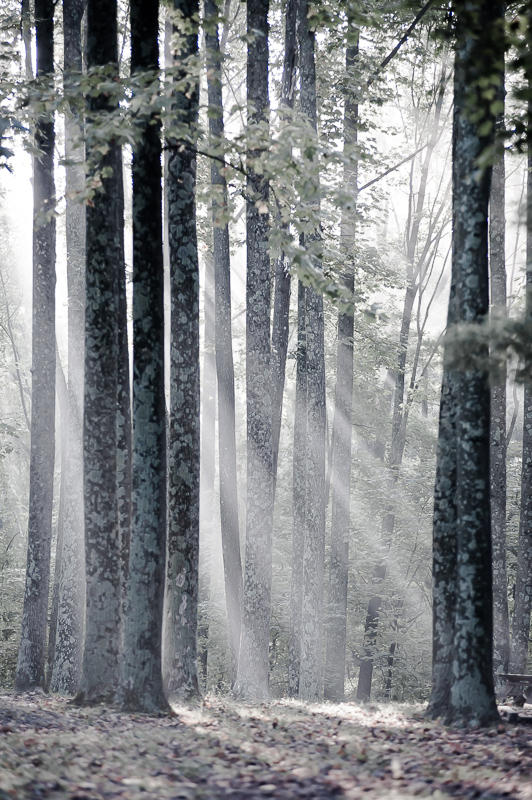 Clifty Falls State Park in eastern Indiana, at the border to Ohio, features a large canyon with several waterfalls, about 20 meters tall.

This allows for views that are not very common elsewhere in Indiana. Usually, when your view is not blocked by trees, it is an endless plane and an endless sky, cut in half by a perfectly straight horizon. At Clifty Falls, you can look across, giving you back a sense of size.

Or, if you dare, you can look down. 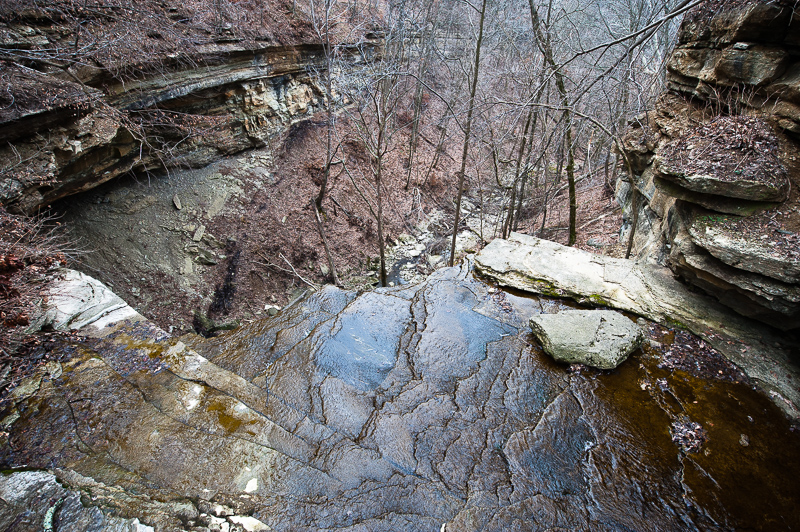 It is somewhat ironic that the only reason lonely trees have a chance to grow this tall is the protection of the canyon they are trying to outgrow. 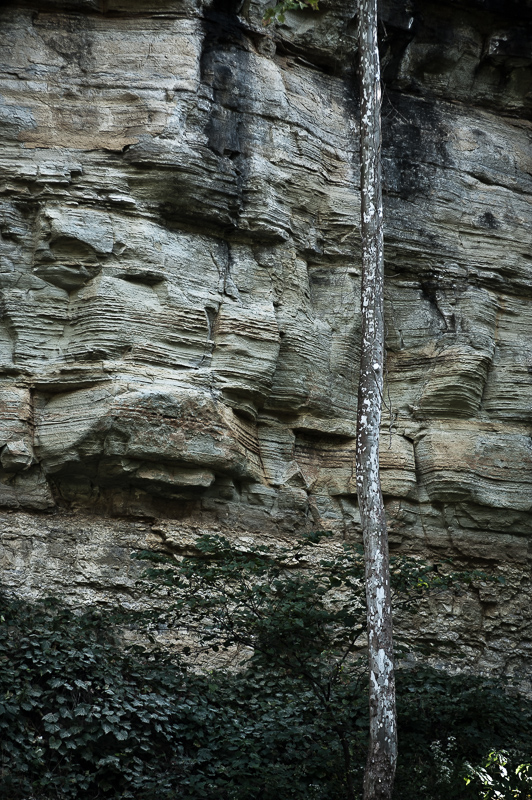 During the Nasrid Dynasty, the emirs of Granada had the material and intellectual resources to turn the castle of the Alhambra into a palace without equal.

Subsequent vandalism, ignorance, and neglect have destroyed much of it, but what remains makes me wonder about what kind of people lived there. 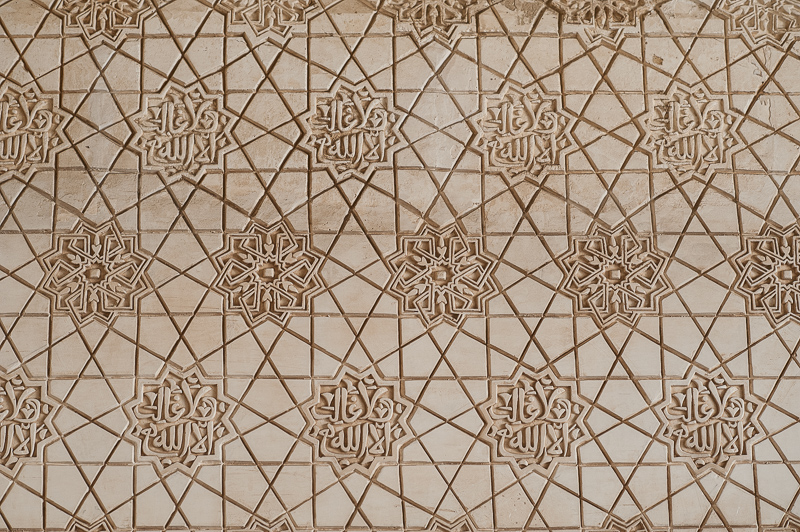 The wall decorations do not tell stories of battles and victories. The lines of the abstract designs appear to repeat themselves forever in infinite variations.

This makes me wonder whether the artists had the flow of time itself in mind rather than particular events.

They must have likened their buildings to the plants in the gardens of the Generalife, organically growing and transforming. 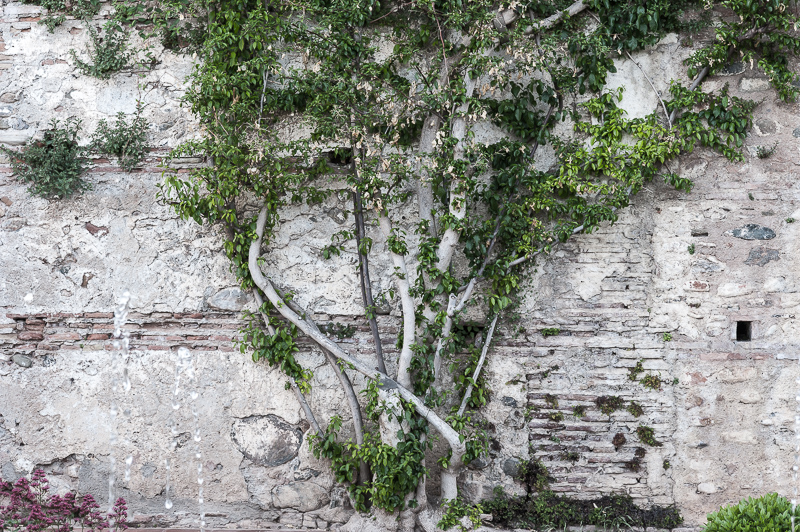 I need to apologize. The blog post from this morning was not meant as a commentary on the church shooting in Charleston. Nothing in this blog is intended as a commentary on daily events. In fact, most posts, including today’s, were written weeks or months ago.

I still should have reviewed what was scheduled for today. It is inappropriate because the title and some of its content suggest intended connections. Connections there are, but they were not intended.

This being said, the recent violent tensions between Black and White have been on my mind quite a bit for the past months, and I do not want to deny that I meant to say more than make a general statement about black and white photography.

However, I am not going to rephrase my words, or add to them. The main purpose of this blog is the construction of time, both past and future, and I will not alter the past deliberately. Interpret as you like, but please take connections between blog time and real time as what they are: random incidents.

Once in a while, as a photographer, you come across a view and know that this will be the shot of the day.
This is very satisfying. Even better and much rarer is it when you come across a location that feels like stepping out of reality into a scene where almost every view is powerful. 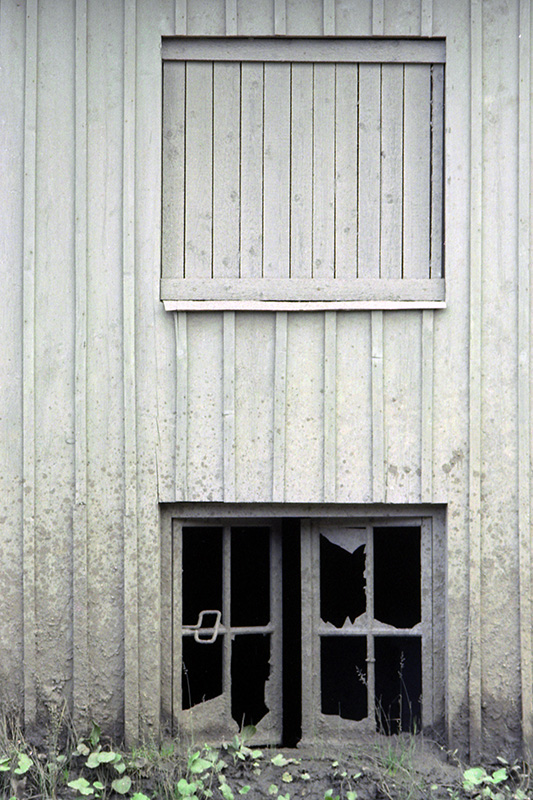 In the 90s, I spent a lot of time biking in the Siebengebirge, a usually rather scenic hilly region southeast of Bonn. Seeking exercise and one or two good views, I once stumbled across a gypsum mine, still active, but in a pretty desolate shape. 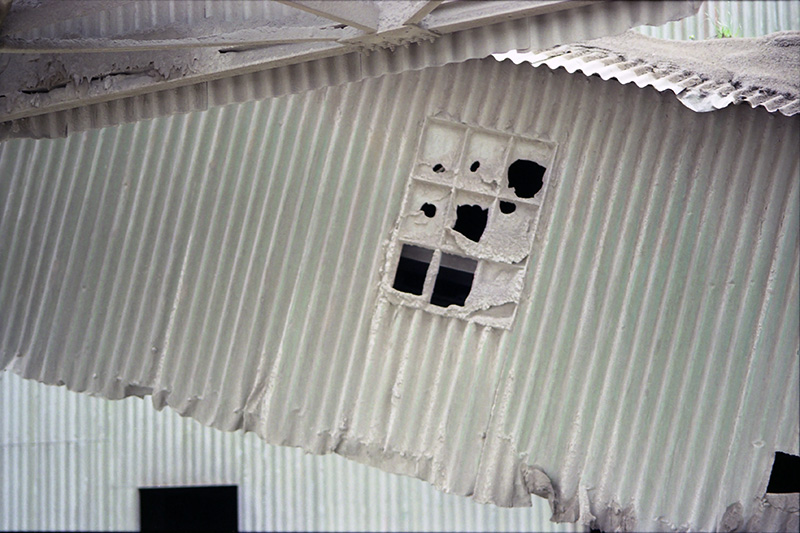 The tension, however, is not between the remaining black and white. It is rather the almost existentialistic fight against decay, be it by machine, be it by nature. 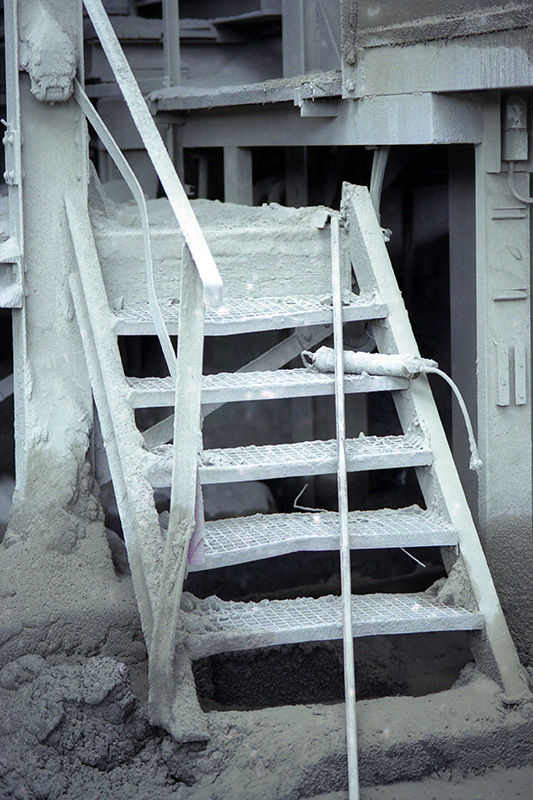 The novel Woman in the Dunes by Kobo Abe, turned into a devastating film by Hiroshi Teshigahara, captures all this much better.

The hyperbolic plane is a geometry whose points are those of a disk, and the lines are circular arcs that meet the boundary circle of the disk at a right angle. Like so:

We see that the arcs in this figure cut out regions, and the central one looks like a deflated square. However, to the hyperbolic eyes the circles are actually straight, and all regions would be considered congruent squares. There is yet another difference to Euclidean geometry: These squares have corners with 60 degree angles, instead of the traditional 90 degrees. In fact, hyperbolic people can make squares with any angle less than 90 degrees at the corners, all the way down to 0 degrees. Then the vertices lie on the boundary of the disk, and we are getting what is called an ideal square.

Of course there is also hyperbolic space, represented by a round ball. The planes are spherical shells meeting the boundary of the ball at a right angle. We can make cubes in hyperbolic space, with dihedral angles less than the traditional 90 degrees. This time, when the cube becomes ideal (i.e. when the corners lie on the boundary of the ball), the dihedral angles of the hyperbolic cube have shrunk down to 60 degrees. 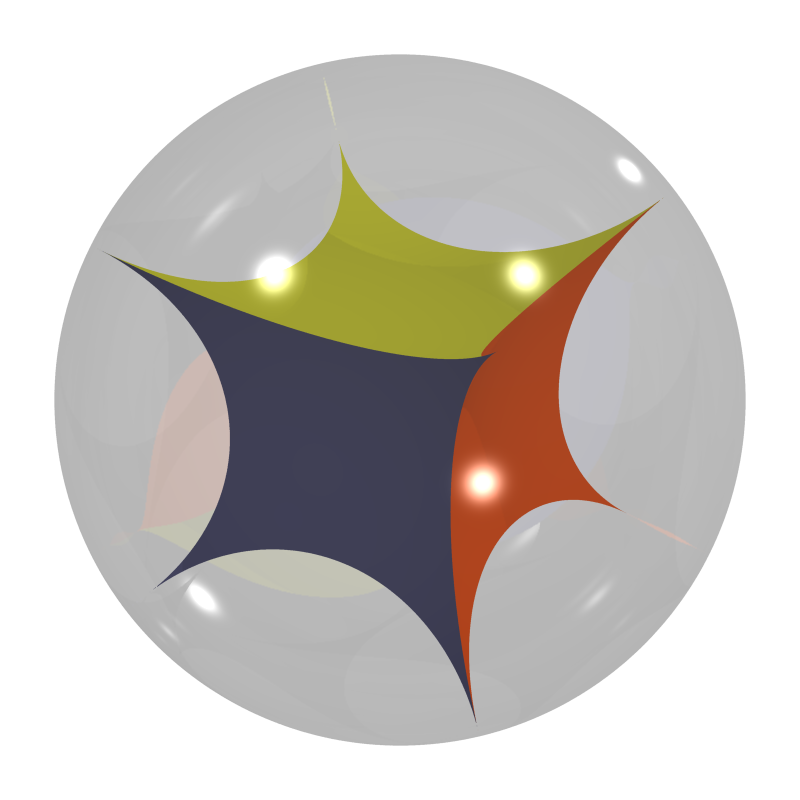 Because six such cubes will fit around an edge very much like six hyperbolic 60 degree squares fir around a corner, we are able to tile all of hyperbolic space with ideal cubes. Visualizing this is a challenge, as if we just draw all the cubes, we will just see a ball, and all the effort was in vain.

But we can leave out some of the cubes. If we start with the central ideal cube, and just take those cubes that can be obtained by rotating about the edges by 180 degrees, we get after a few steps the following object, shown as a stereo pair for cross-eyed viewing.

The final image is obtained by applying more such rotations, and making the material relective. 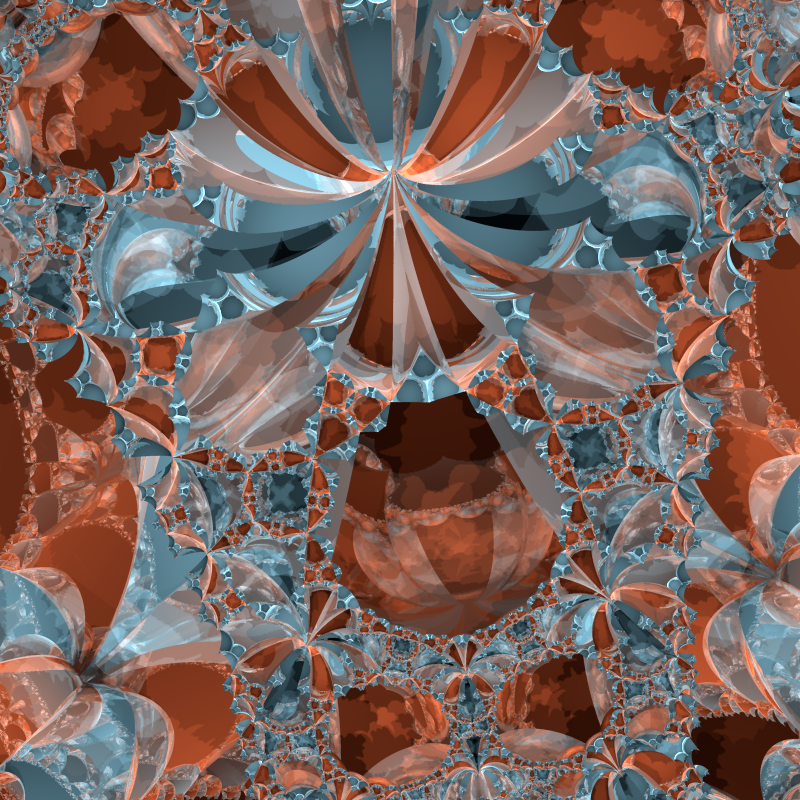 The beautiful German word Kalkmagerrasen means a calcareous low-nutrient meadow. Low nutrients implies few trees and shrubs, few weeds, but also some rare plants that had no chance to compete elsewhere. Among them are wild orchids, quite different form the ones I was familiar with before.

The plants are between 20 and 40 cm tall, and show an enormous amount of detail. I took these pictures in 1997 in the Eiffel, using a flash. There wasn’t much choice, given wind and otherwise restricted means. This makes everything look artificial, which might well be ok.

The names Knabenkraut and Ragwurz tell from times when imagination played a more important role than in our prefabricated days. 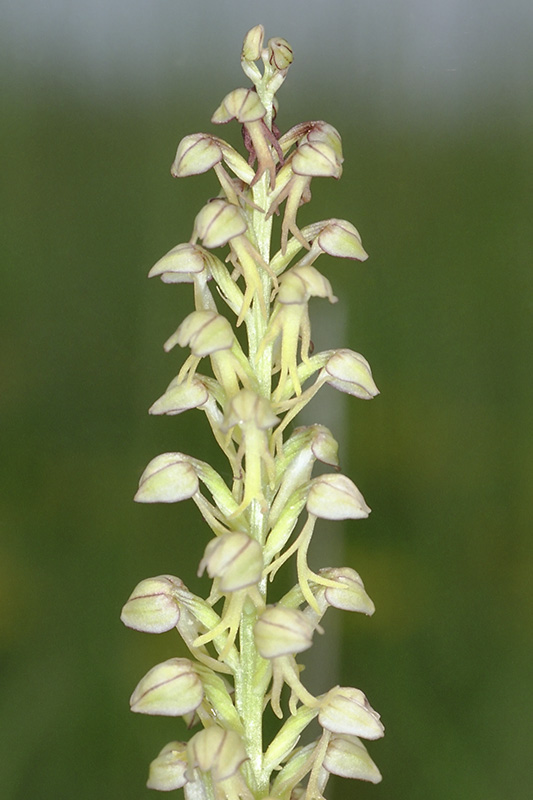 Some of the shapes of the flowers are said to resemble the bodies of the insects they are trying to attract.

That we, instead, see in them hangmen, is, of course, just telling something about us. Phew.

Southern Indiana is limestone country, and the rocky ground is sometimes less than ideal for farming. So people move north to Purdue, and the abandoned farms get converted into nature preserves. 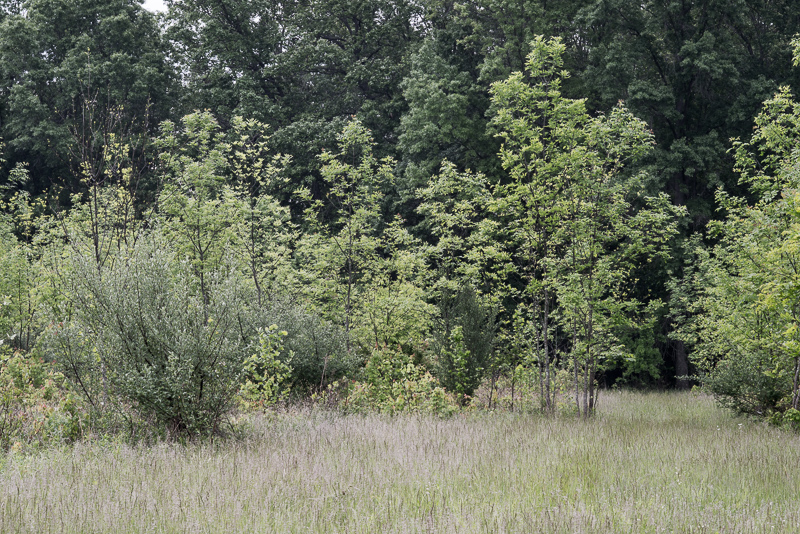 An excellent example is the Beanblossom Bottoms Nature Preserve, fabulously maintained by the Sycamore Land Trust. 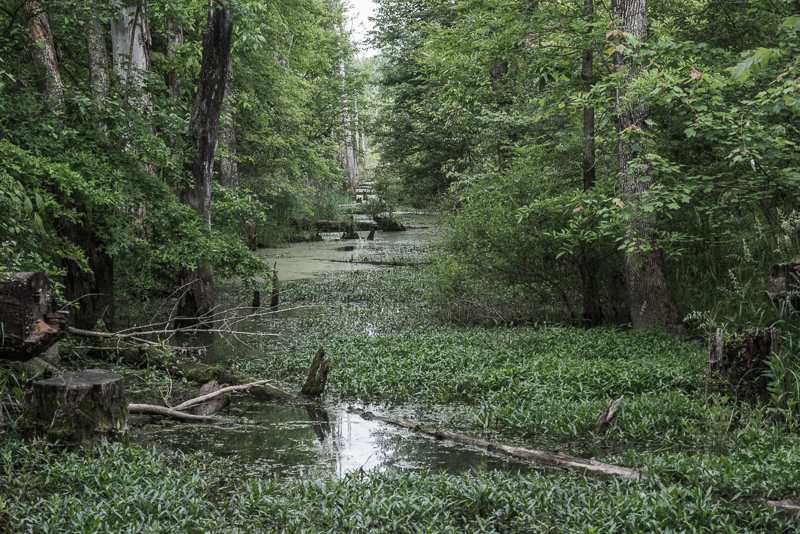 The fact that we are in former farmland here means that the landscape is more uniform than in a natural wooded area, as all plants are roughly at the same age. 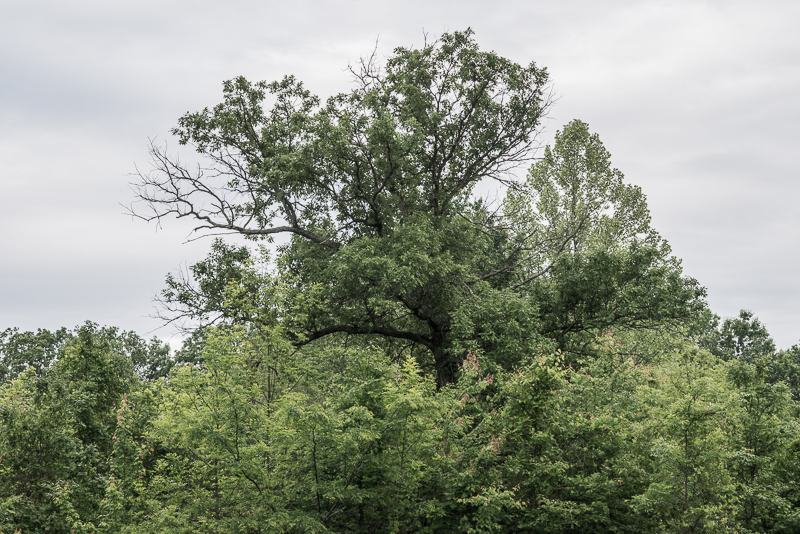 There is nothing spectacular here that would merit a visit say from New York. But if you are seeking a contemplative view, there will always be a new one.

Paris has many things to offer, and not few of them are best savored at night. One popular option is to take the RER to La Défense, and take a look at La Grande Arche. 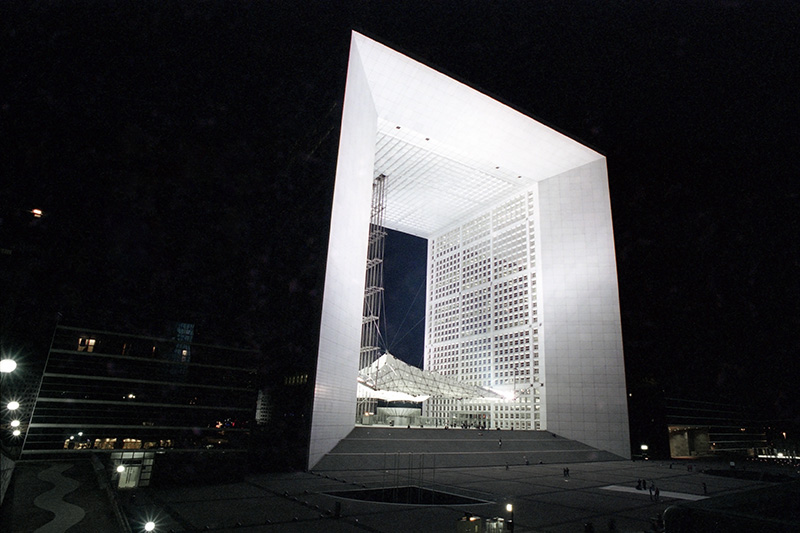 This monumental building was designed by Johann Otto von Spreckelsen and Erik Reitzel, and is one of several Grands Projets by France’s former president François Mitterrand.

Its shape is inspired by a common projection of the hypercube into Euclidean space. 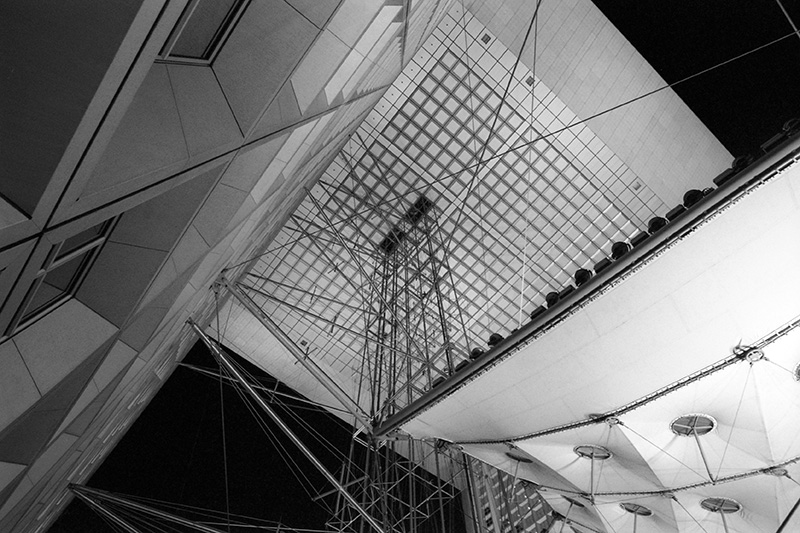 Like every good piece of art, it is worth looking at from different angles.

I took these pictures in the summer of 1991, just before a backpacking trip to the French Alps. 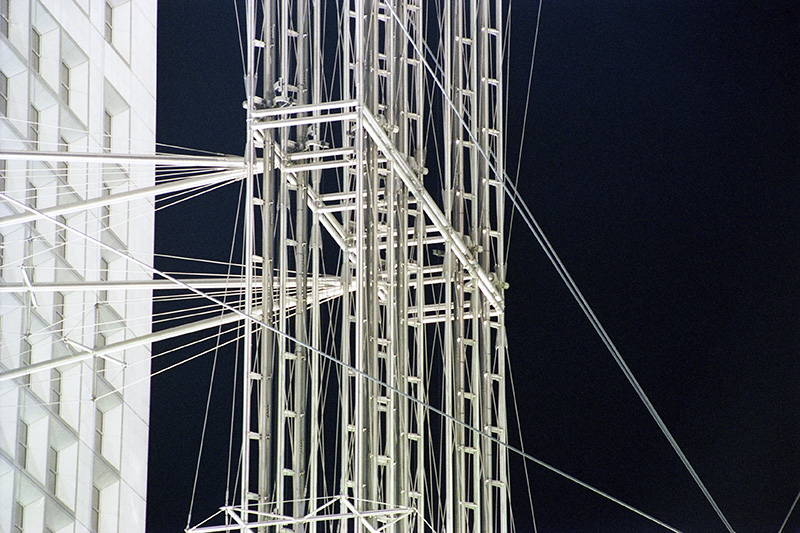 The platform under the Grande Arche is typically so bright and the area behind so dark that
the casual visitor will not notice what the long time exposure reveals.

My first digital camera was a Fuji Finepix 1400. Yes, the 1400 means that it had a staggering 1.4 Megapixels. That pretty much filled the screens these days, and also the memory cards. The first trip I took the camera to was to Amrum, an island in the North Sea. As I only had a really small memory card at first, I had to reduce the image size. Back then this was fine. Today they look puny.

Visiting Amrum in winter seems like a dumb idea: No rolling in the dunes, no swimming in the sea during long summer nights. Instead, hikes along the frozen beach during brief days, and sauna in the evening. 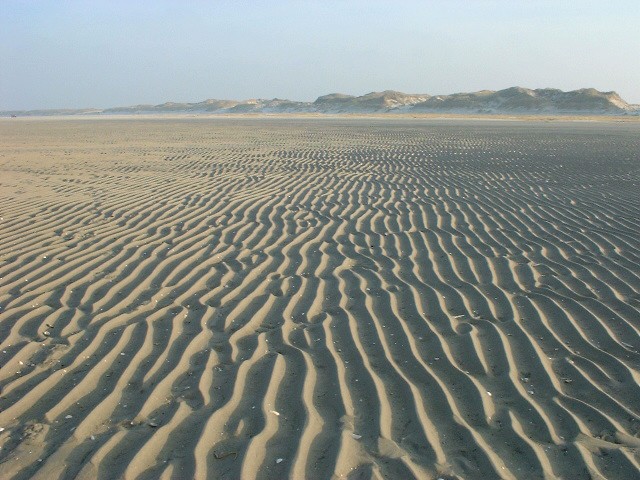 The tides flood the extended beaches and leave behind compelling patterns, which are brought out to perfection by the low sun.

Freezing and thawing helps to make patterns that the waves alone don’t accomplish. 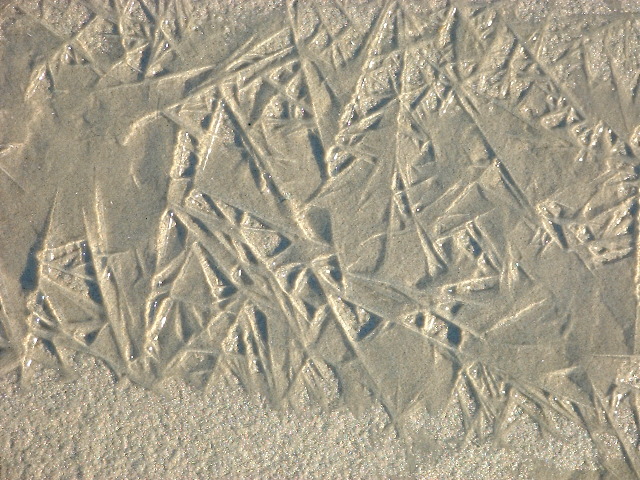 The coastline looks like the alien landscape of a cratered moon. 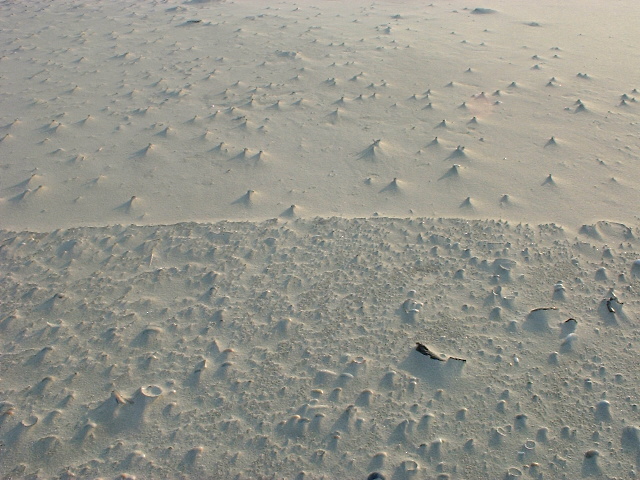 I wish I could come up with sculptures like these: Simple, but utterly compelling.