Coming fall semester  I’ll be teaching our geometry undergraduate course, and to prepare myself a little, I am going to try some of the ideas I’d like to explain. One emphasis is on simplicity. If we just concern ourselves with points in the (say Euclidean) plane, a first fundamental question is whether they can be in an interesting position, and if so, how we can tell?

There is (almost) nothing to say here for one or two points, but for three points it gets interesting. Three points can be collinear, a condition from projective geometry, about which I know what to say. Another natural choice is to place the three points at the vertices of an equilateral triangle.

That is already a fairly advanced concept. How to you explain what an equilateral triangle is to your friend’s children in elementary school? As a full orbit of a cyclic group of order 3? That is, in fact, the simplest definition I know, avoiding conceptually much more difficult measurements of lengths or angles. It also has the advantage that it generalizes to other geometries.

How do we tell? An elegant answer in the spirit of the orbit definition can be given be denoting the vertices A, B, C as complex numbers. They lie at the vertices of an equilateral triangle if and only if A+𝛇B+𝛇²C=0, where 𝛇 denotes a third root of unity: 𝛇 = (-1+i√3)/2. This is easy to see, because it holds for your favorite equilateral triangle, and all equilateral triangles are similar, i.e. differ by a complex linear transformation which changes the left hand side of the test equation by a nonzero factor. I know I will have to say a little more, but not much.

What is this good for? One amusing application is Napoleon’s Theorem:

Could there possibly a better proof? Yes and no. Here is one that is more a revelation than a proof.

The first key observation is that there is a tiling of the plane, using the given triangle and the equilateral Napoleon triangles, as shown above. This tiling becomes periodic with a hexagonal period lattice.

This allows to overlay the Napoleon tiling with a tiling by equilateral triangles that have their vertices at the centroids of the Napoleon triangles.

The reader will find it amusing to fit this all together. How general is all this? For instance, can we do this in a plane over a field without a third root of unity?

It is not clear whether Napoleon has actually proven this theorem. He was interested in Mathematics, and discussed science with Lagrange and Laplace. The first known written appearance is an article by W.
Rutherford in 1825, which doesn’t mention Napoleon.

A few weeks ago, my daughter brought home several of these. A waterplant. Neither she nor I know what it’s called. She says she downloaded it. Language. Reality. 18 years ago I expected she’d been driven me mad with new fashionable forms of body modifications. Our children are there to surprise us. 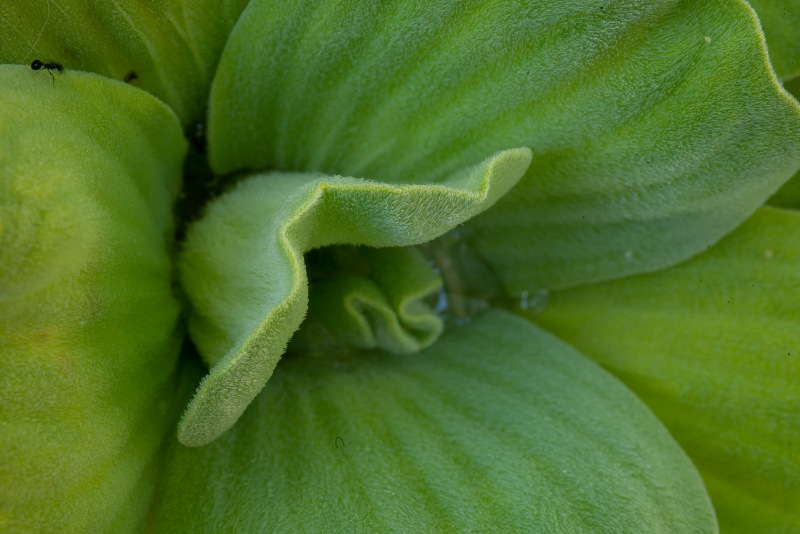 Let’s have a closer look. The ant is there to eat to show us the scale. This is the stuff above water. Leaves.

And here are the roots. We first kept the plants outside in the shade in tap water, which they didn’t like. Now they are in the sun in tubs full with rain water, which they seem to love. The roots have grown immensely, making it stay.

They consist of long, pale strands with many smaller, almost translucent tendrils branching out. I had never looked at a clean, delicate root system like this before.

We return for a last time this year to New Harmony. This time we visit the nearby state park, my original motivation to travel to the southwest corner of Indiana.

The park is rough and unkempt, without must-see spots. Instead, you get largely untouched woodland where you have to find the subtle beauty yourself.

May Apples play with blurred highlights as if they have been waiting for me, and somebody has left a message in the dried river bed. Unlikely, but we can dream.

On this Friday morning a good month ago, I am the only visitor. Below once again the Wabash river, shortly before he finds oblivion in the Ohio. 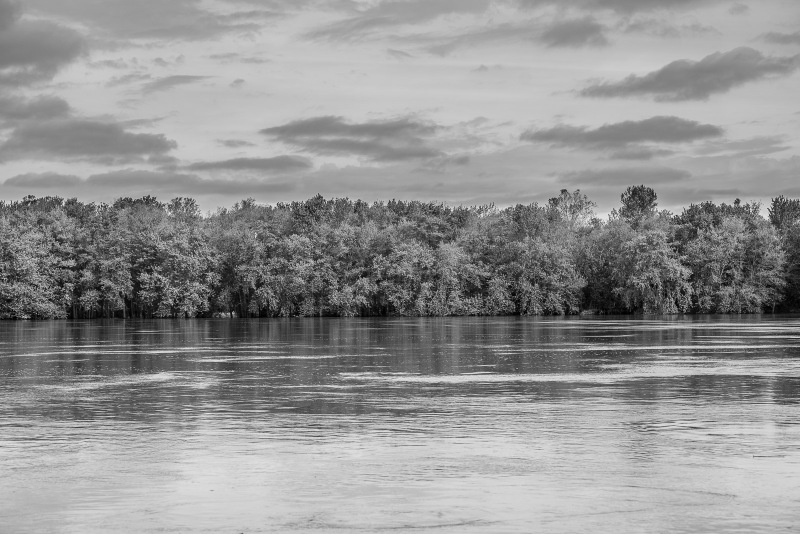 The landscape doesn’t quite feel like an Indiana landscape anymore. This is already the South. The wonderfully braided bark of the Pecan tree cannot be seen much further north. 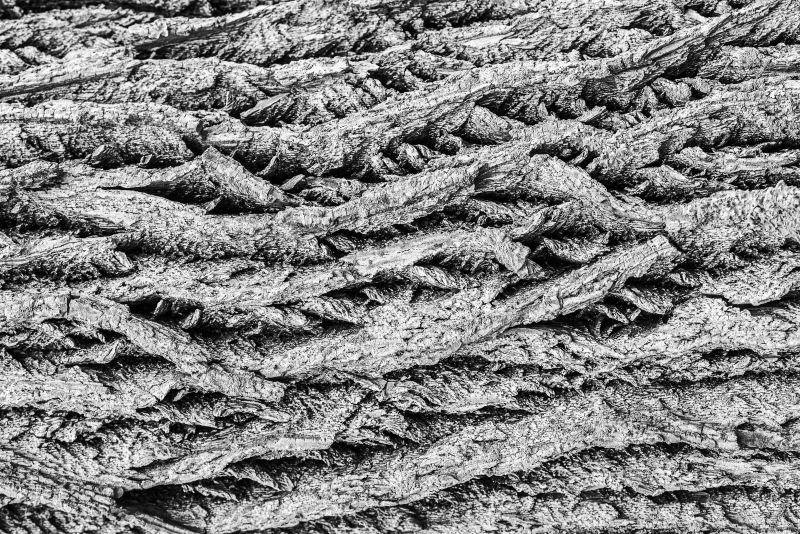 There is somebody else, after all. Patient Cassiopeia, waiting for the years to pass.

I like taking pictures of people, but rarely post them. Today will I make an exception, because Jessica and Matthew are celebrating their 10th wedding anniversary, of which I had the honor and pleasure to take the pictures. Their first decade… 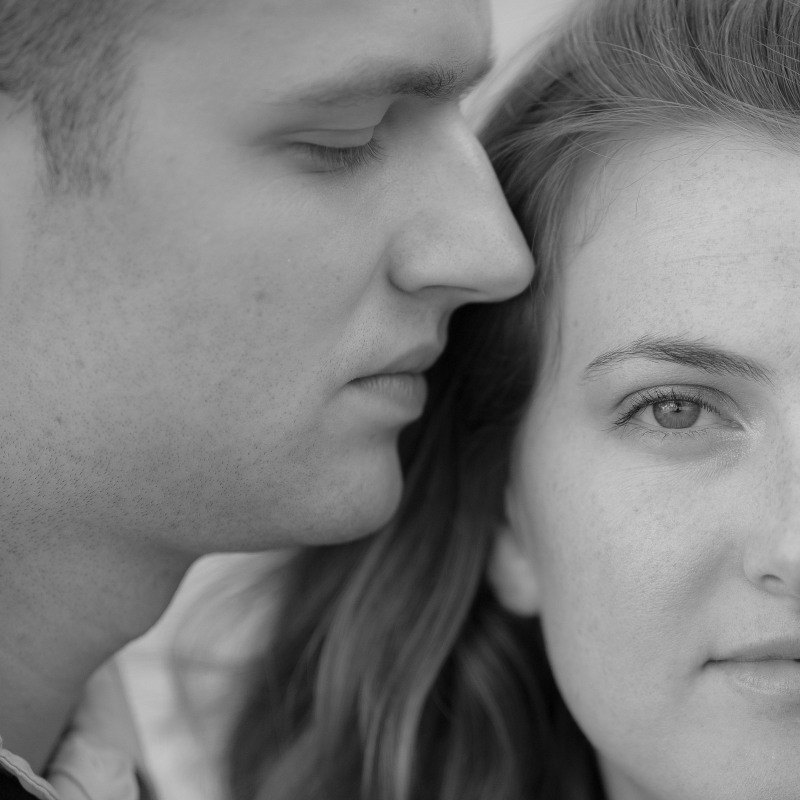 Taking portraits is difficult. Heinrich von Kleist finishes his essay about the marionette theater with the dialogue:

“So we have to eat from the tree of knowledge a second time in order to achieve the state of innocence again?” – “Yes, indeed, and this will be the final chapter of the history of the world.” 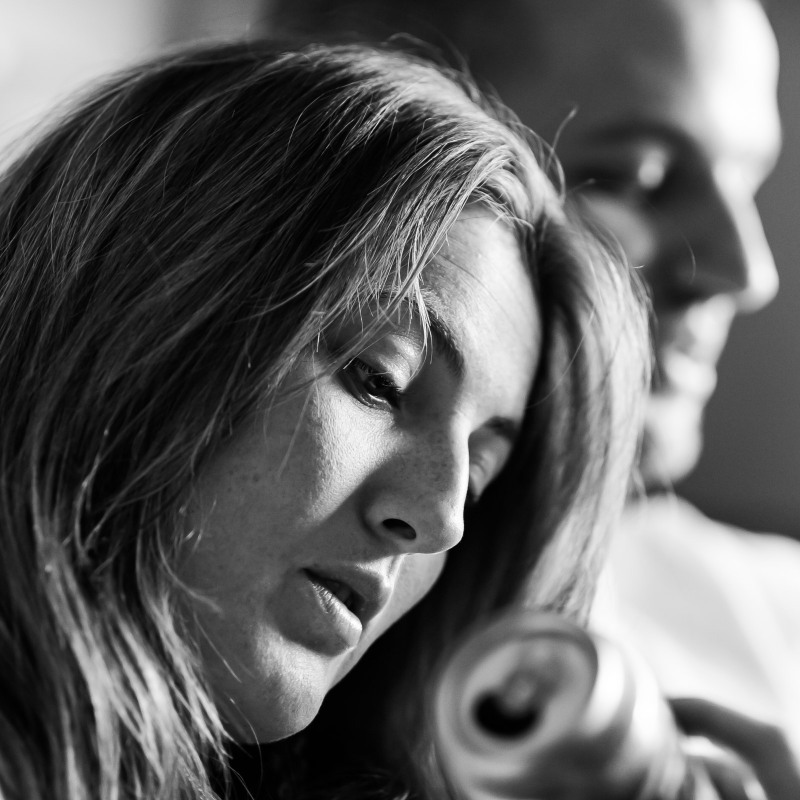 People are nor landscapes. You can treat them like that when they are unobserved to snitch the occasional good photo. Most people freeze when they become aware that somebody is taking a picture. 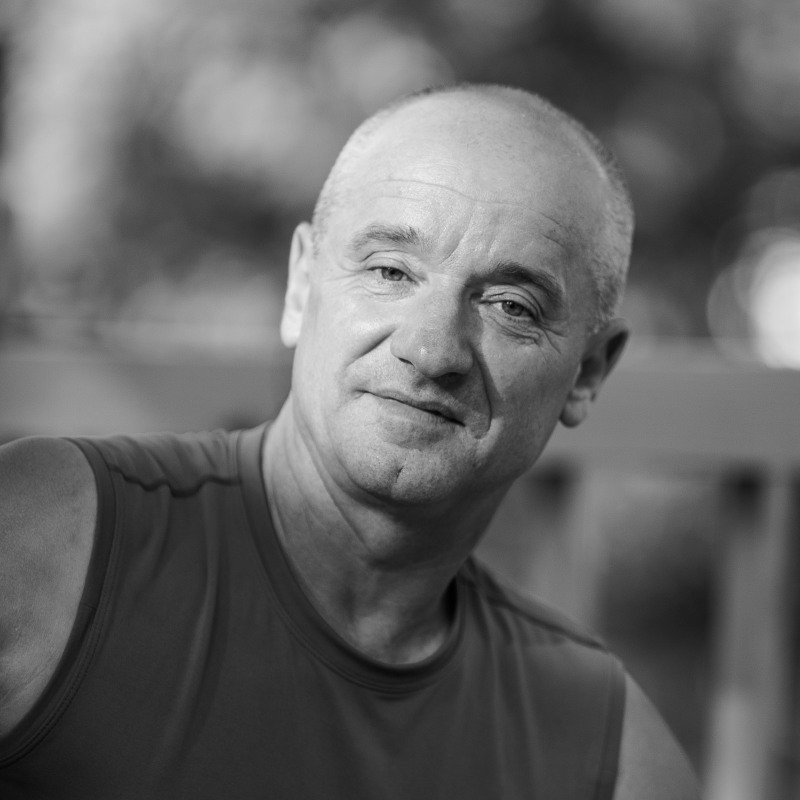 Matthew’s parents are a rare exception, the personified confidence in themselves and the world.

Then, of course, people also don’t hold still, as do most landscapes. So one has to be vigilant and be quick. 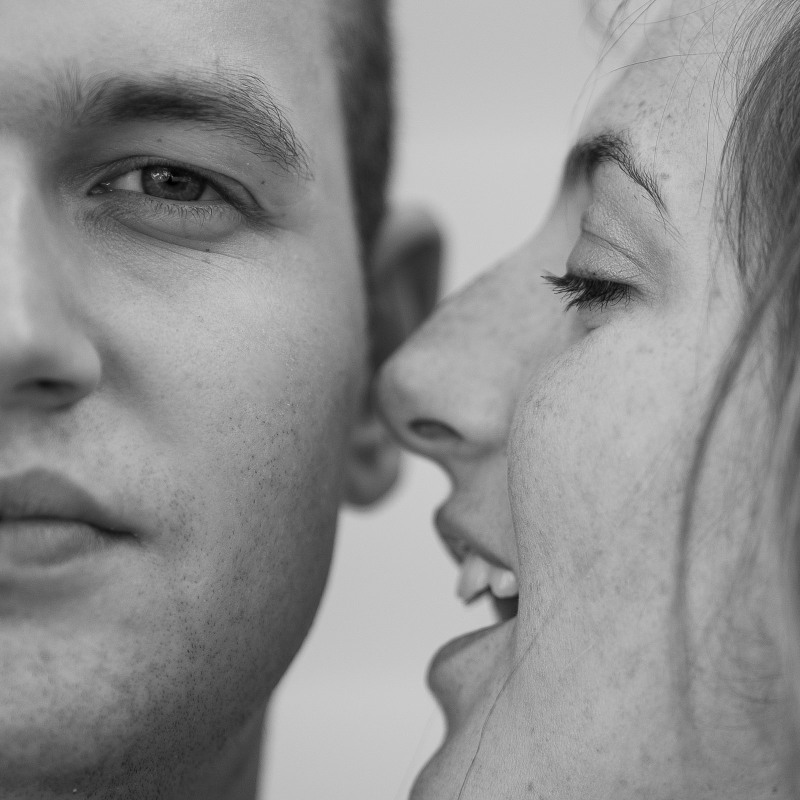 Let’s return to the local sedges while they are young and beautiful, this time up close, and in expensive color.

The pictures here are magnifications of what you see with the naked eye by a factor 5 to 20, depending on your screen size. They were taking with a macro lens that allows up to 5-fold magnification ratio of reality to sensor size. 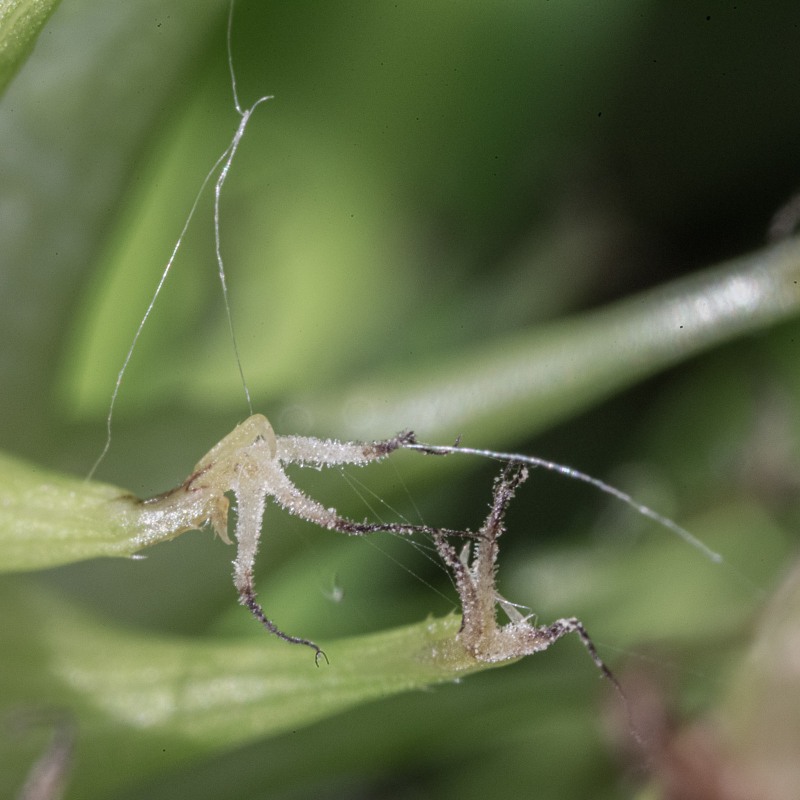 The tips of the flowers reveal unexpected branching into tripods, tendrils and further branching. Who knows how this will continue. Can they feel that gentle touch? 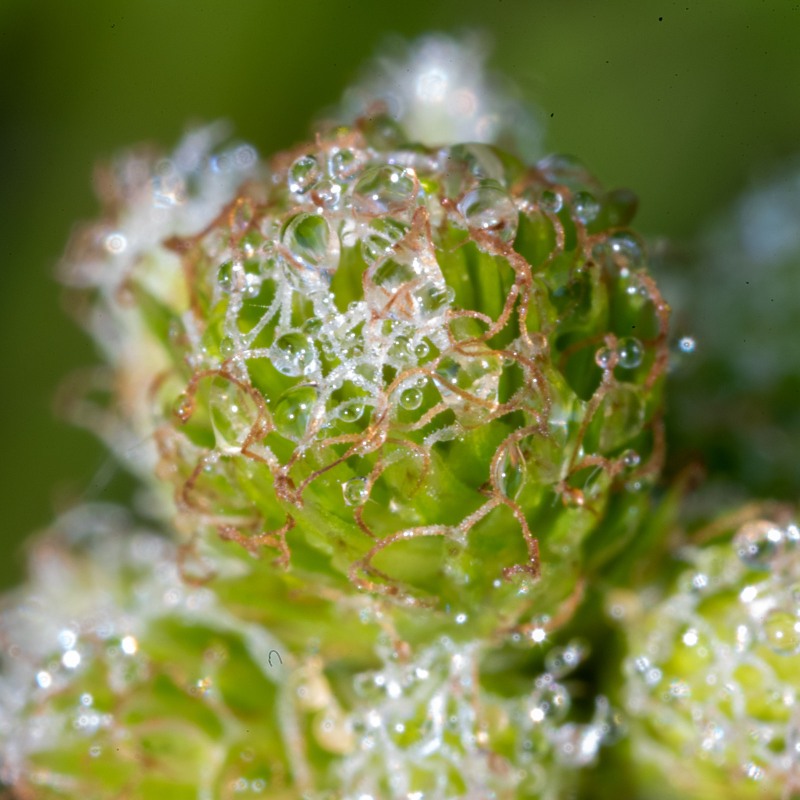 This is our world. Why does it look completely alien? Is it just unwillingness to look, and to get used to it? 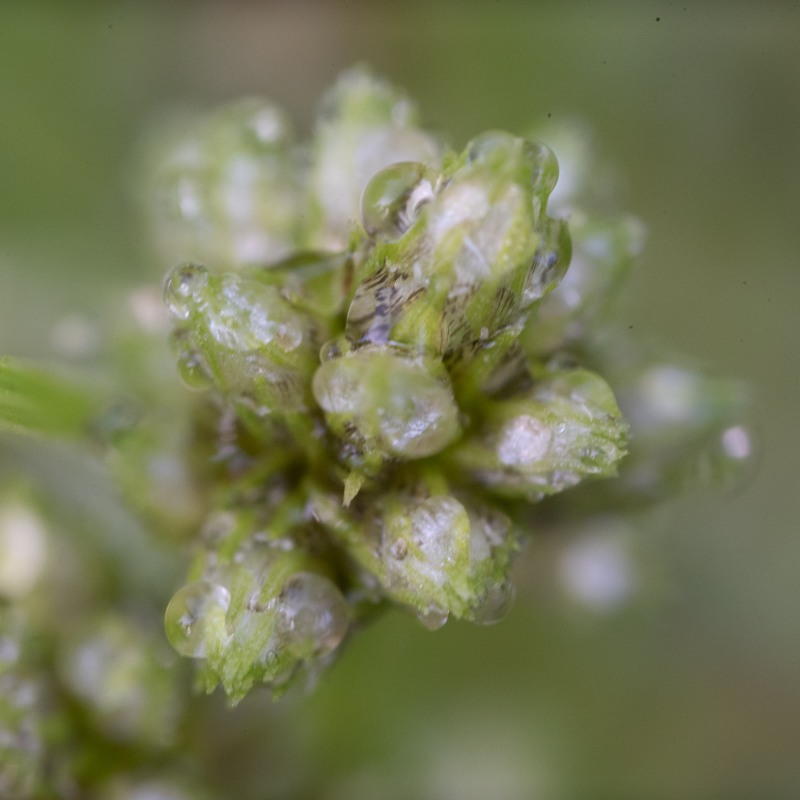 This is an unusual post, marking arrivals and departures. 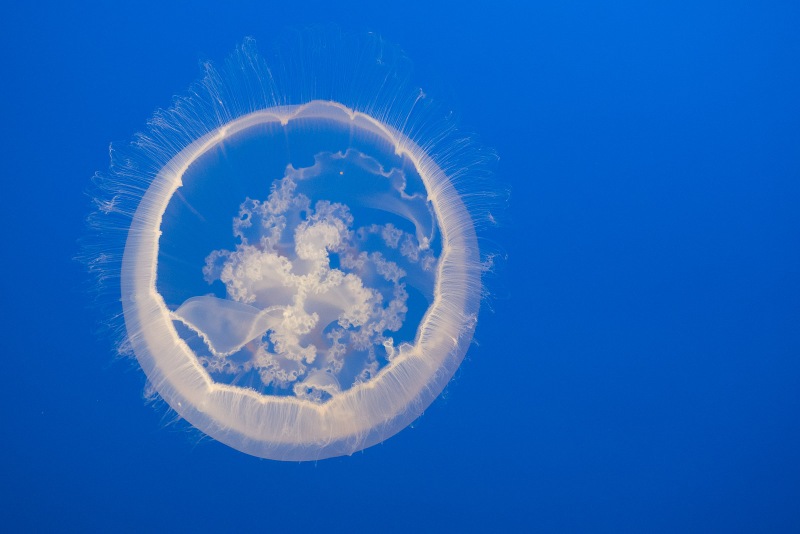 Even worse, the sea creatures on display appear to have nothing to do with that theme. Let me explain. One of the arrivals is that of my daughter arriving at the critical age of 18, and one of the departures is hers to college in California. This provides a first link: The pictures are from the Monterey Aquarium, which we visited last year.

When I see these astonishing creatures, I am inevitably reminded of Denis Villeneuve’s film Arrival, a rare example of an adaptation that works independently and as well in its own way as the source, here Ted Chiang’s The Story of Your Life. The departure I will associate with this is that of the composer of the wondrous film score, Jóhann Jóhannsson, who left us last year, too early. 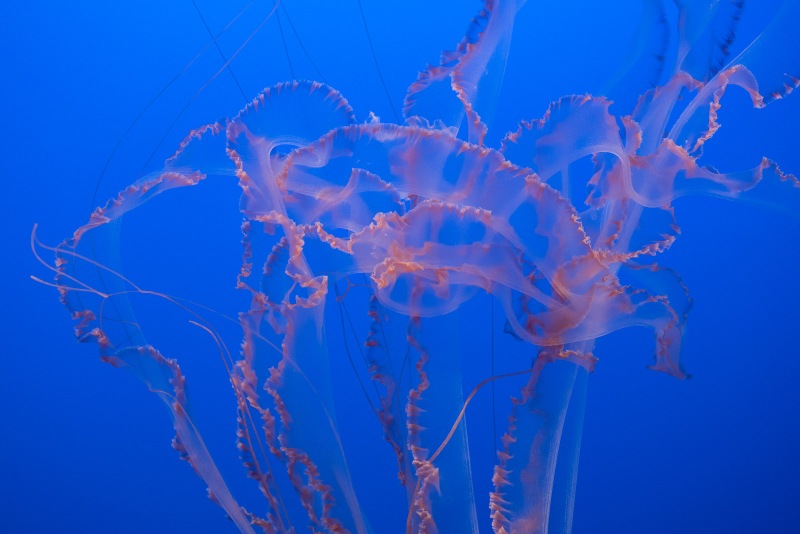 More important than arrival and departure are the stories that are framed in between, the mysterious creatures that propel our lives forward or bring it to a halt.

I am looking forward to hear more.

Summer in Indiana is warm and humid, which is good for insects, and bad for me, as my blood is apparently rather sweet. 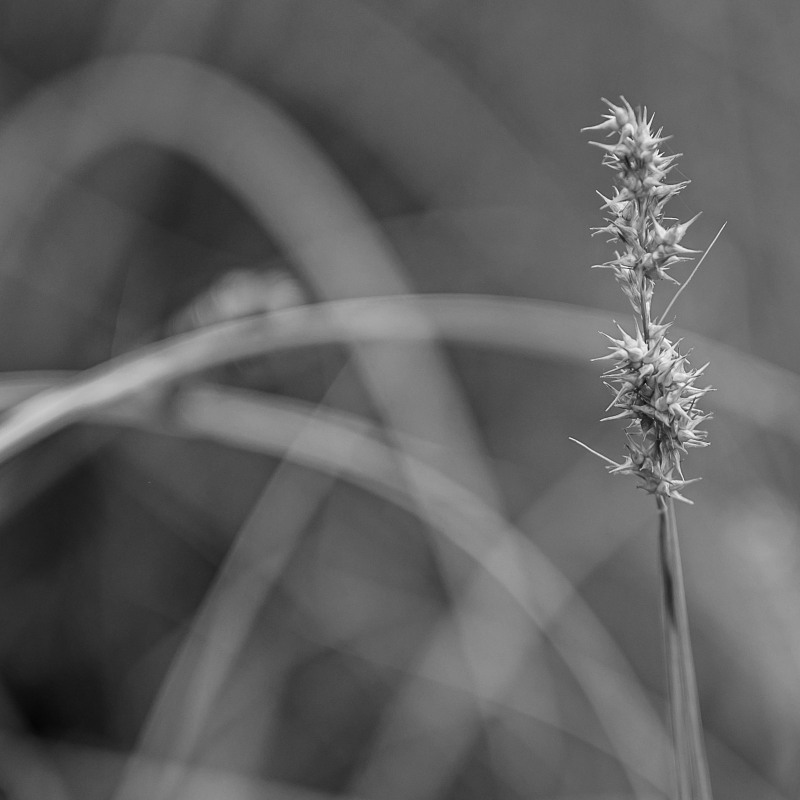 The worst place to be then are swampy areas, which explains that I haven’t consciously seen the local sedge varieties, until today.

In contrast to grasses the stems have triangular cross sections, and the flowers are wonders of architecture.

There are over 5000 different species around, so if this becomes another obsession of mine, brace yourself for the next decade of posts.

The geometric complexity is astonishing. In one specimen of carex grayi (above) I counted 17 spikes, which is a strange number. How do they know where to grow another one?

This little excursion probably cost me an ounce of blood (and subsequent itching). It has been worth it.

Using a refractive filter to show in a single image what is before and behind you is a useful allegory of linear time, and the ability to split light into pretty rainbows can create the illusion that we understand its inner workings, like in the waterfall pictures above and below. There is a danger that the mere effect becomes purpose.

I found another effect more compelling, using a filter patterned with many facets, a little like an insect eye. Below, at the spring, we can see reality repeated and made visible in ghost like images. 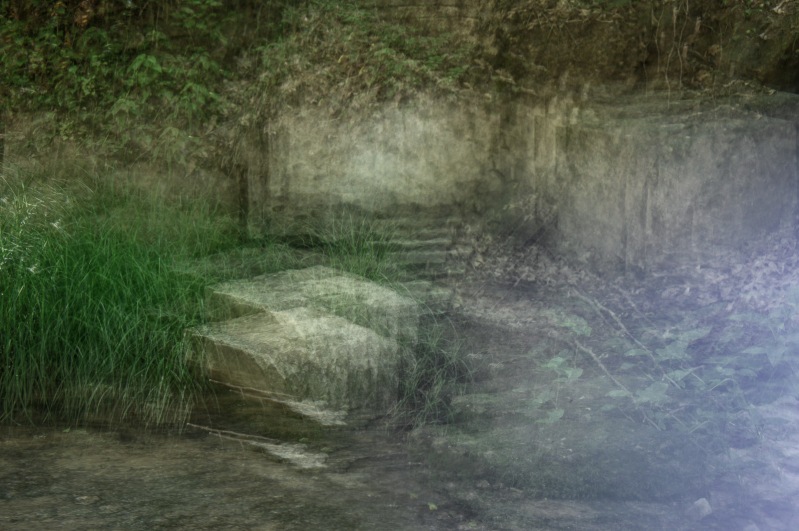 What we see are slightly different views of the same scene, shifted against each other, resulting in a mild form of cubism, as in the quarry below.

Much of this can of course done with a single image in Photoshop. Doing it with a movable filter has the advantage that you can play with the constraints of reality while there. You take a picture of what you see, and don’t create what you want to see afterwards.

The effect can be subtle, creating the illusion of a cyclic space in which we can walk freely, refracted as well.

My daughter always says I don’t experiment enough, so I borrowed one of her prism filters and played around with them a little.

These are not the usual screw on or slide in filters, but large, chunky pieces of glass that you hold in front of the lens to break the light. 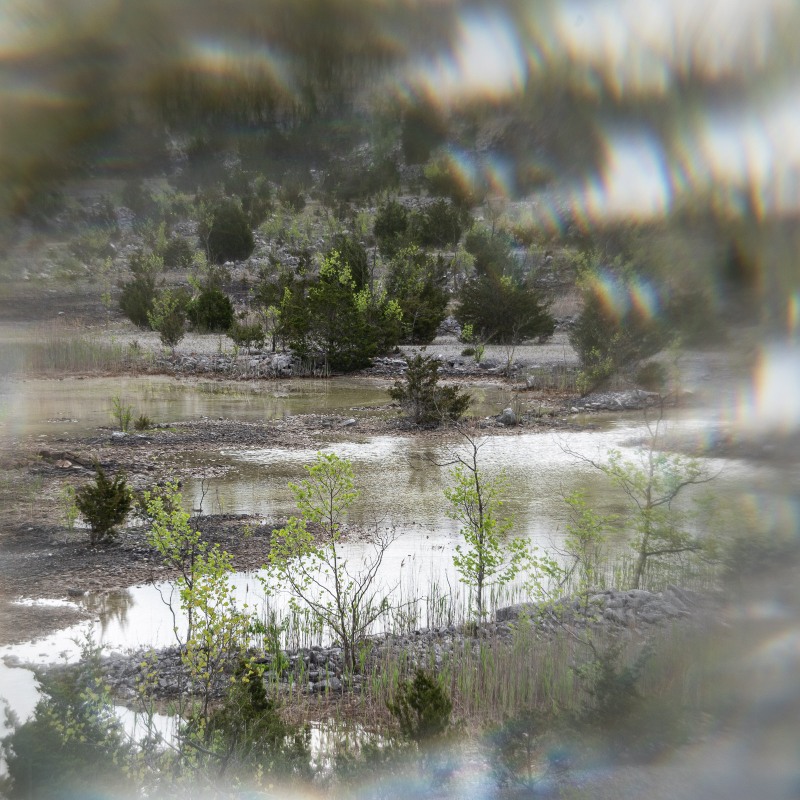 This way you can get, depending on sunlight and scenery, all kinds of colorful effects, reflections (from the back), and unexpected distortions. 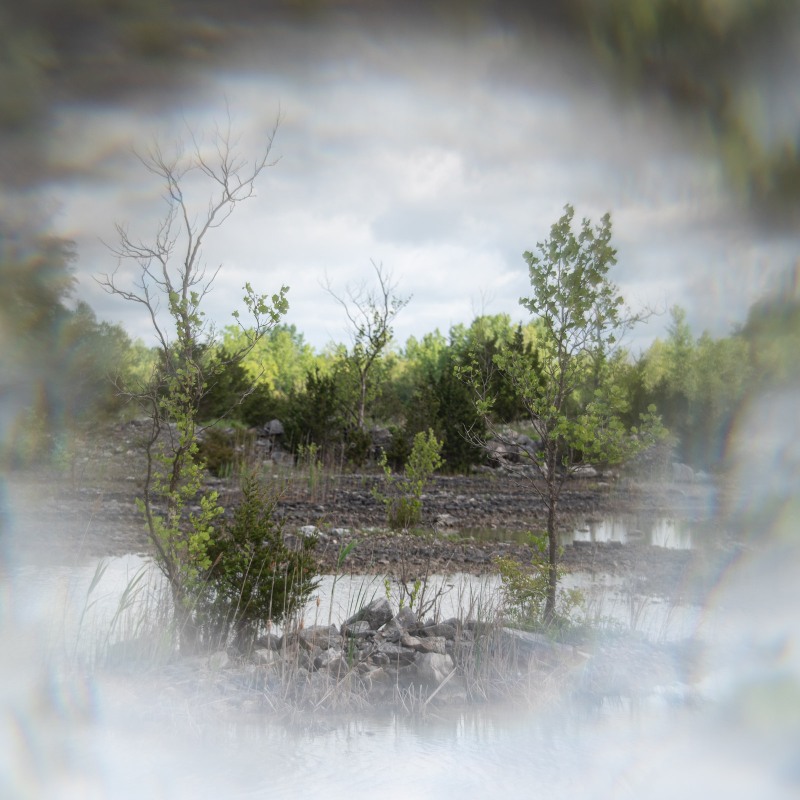 The filter I used was circular with a ring of smaller facets around the center, making it better suitable for portraits than landscape. As usual, there was nobody else around.

Above you see the effect of reflections, and below a circle of trees refracted at the outer facets.

This will clearly require some more praxis…