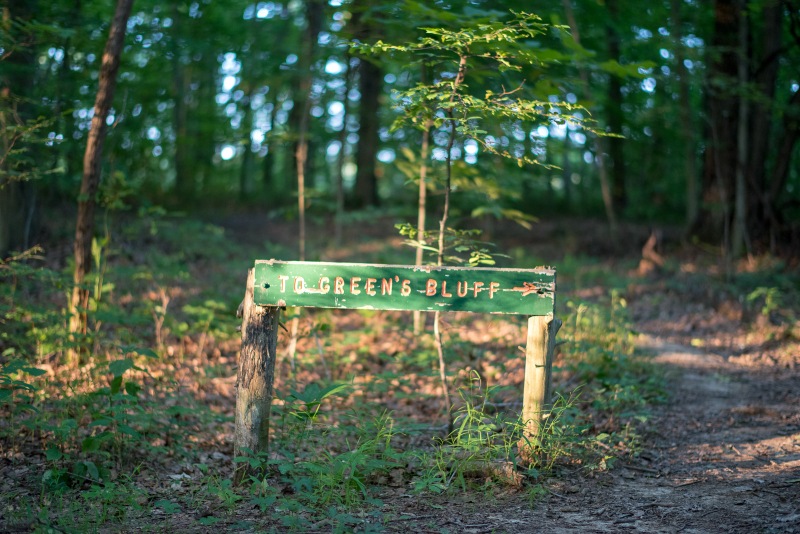 The trail leads through woodland to a cliff above Raccoon Creek.

On-site information is a little vague.

Not many people visit, in particular not during the hot summer days, when one of the attractions is in full growth.

Ferns are not unusual in Indiana, but the Hay Scented Fern is pretty and not common here.

Today we look at a puzzle invented by Alan Schoen that he calls Roto-Tiler. He explained this to me a few years ago, and when I showed him notes I made for a class, he denied that this is the puzzle he described. I insist it is, and it is quite certainly not mine.

Things happen on a hexagonal board like the one above (it can but doesn’t need to be regular), tiled by hexagonal rhombi of equal size. The acute angles are marked by 1/3-circles, which occasionally happen to close up when three acute angles meet. In that case, a move consists of rotating the three involved rhombi by 120º either way. 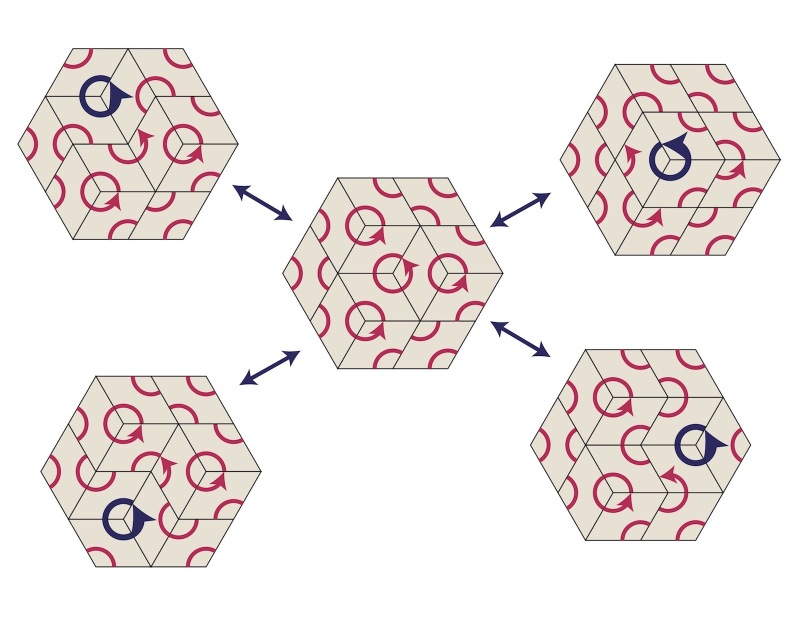 Above you can see the possible four moves from the central position. At this point it is not clear at all that a move is always possible. The puzzle consists of transforming one given tiling by rhombi to another given tiling of the same hexagon. For instance, a simple example asks to find the smallest number of moves that takes the left tiling to the right tiling.

The clue to solve this puzzle is to view the hexagons as the parallel projection of a box subdivided into smaller cubes, and the rhombi as the projections of the faces of the smaller cubes. This becomes visually more intuitive if we color the rhombi by their orientation so that parallel cube faces have the same color: 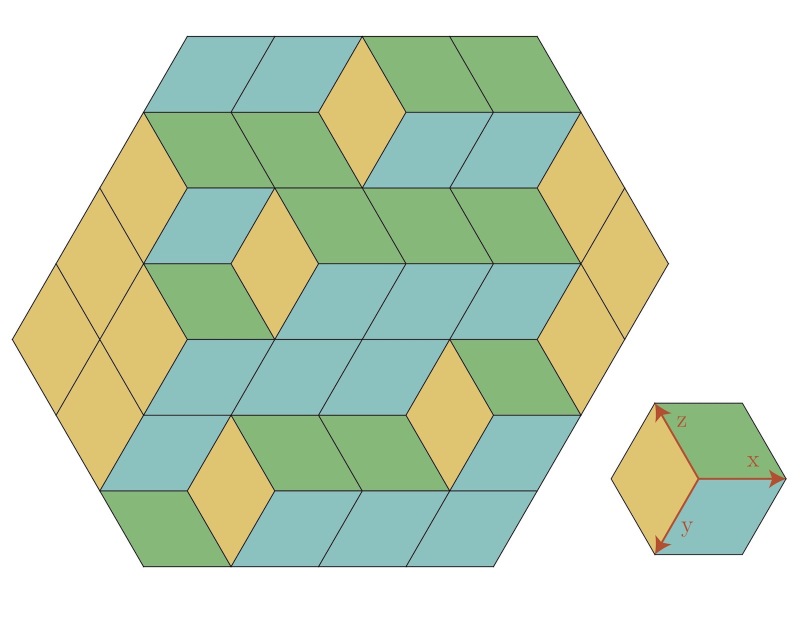 Then the hexagon above becomes the projection of a box partially filled with cubes, and a move consists of adding or removing a frontmost cube. This step into the third dimension explains everything: We see that we can solve every Roto-Tiler puzzle by emptying and filling boxes with cubes. Last week’s first example was a 1-dimensional version of this, next week we will try to grasp a 3-dimensional version and practice our 4-dimensional intuition.

Last November I mused whether the Sycamore trees would, over the years, take over the quarry in DePauw Nature Park. My recent visit made me skeptical.

There are still lots of little sproutlings, but what I thought looks like early fall coloring in the top picture and below,

turns out to be something else up close.

At least one half of the younger trees are affected by leaf loss and dead branches, and the brown color look rather unhealthy.

It might be that these trees are affected by Anthracnose, or that just the generally problematic ground cover of the quarry causes malnutrition, as Bryan from DePauw University suggested. We will have to wait. 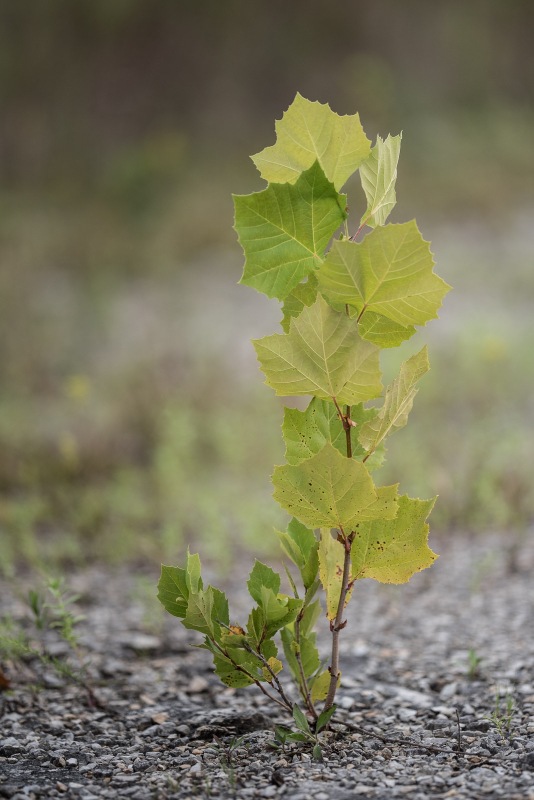 Enough of minimal surfaces, at least here, for a while. Time for a relaxing little game. Let’s put six tokens in a row, three showing a 1, the other three a 2. There are evidently 6 choose 3 = 20 possibilities for that. A move consists of swapping two neighboring tokens, which also evidently only makes sense if they are different.

Above is the graph that shows all possible states, the connections indicating the possible moves. What is interesting here? Not much. The graph is connected, which is easy to explain, and I mention all this only because it will serve as the 1-dimensional example of what we’ll do in two dimensions next week and in even higher dimensions later. So, to make things more complicated we are allowing the six tokens to show three values 1, 2, 3. We begin with two tokens of each kind.

The graph is more complicated but offers no interesting insights. Let’s forbid to swap neighbors 12 or 21. The game graph will have six identical components. This usually makes for hideous puzzles, asking the innocent victim to find moves that change say 112233 to 332211. But here this is too obvious, as we clearly cannot change the order of the 1s and 2s while the 3s can move freely among them.

This time we get two components as well. Why can’t we move from 1234 to 4123, i.e. rotate all tokens clockwise by 90 degrees? This time, the order still plays a role, but involves the orders of both pairs 13 and 24 simultaneously, which is hard to see. So this makes, in all its simplicity, a pretty nice puzzle. 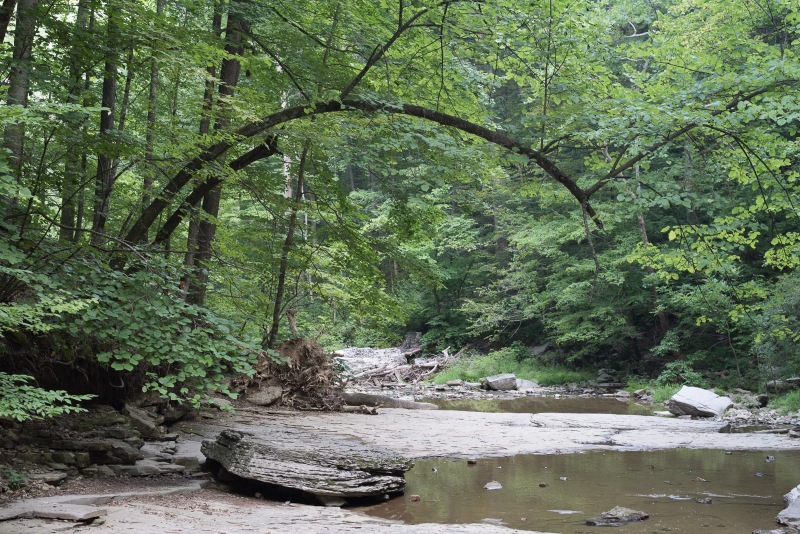 Some views and places, like the arching tree above (still there!), about which I have written before in one of the more often revisited blog posts of this remote little blog, lend themselves easily to metaphors. Others, like the one below, are more hermetic.

The spot is the same as in one of my earliest posts. Back then, the composition off fallen tree on rock before a steep canyon wall kept intriguing me over several seasons, triggering something I can’t put into words. After a seasonal flood swept away the tree, the place became less fascinating, until I noticed that something was happening. Two little Sycamore trees had taken possession, visible already above. 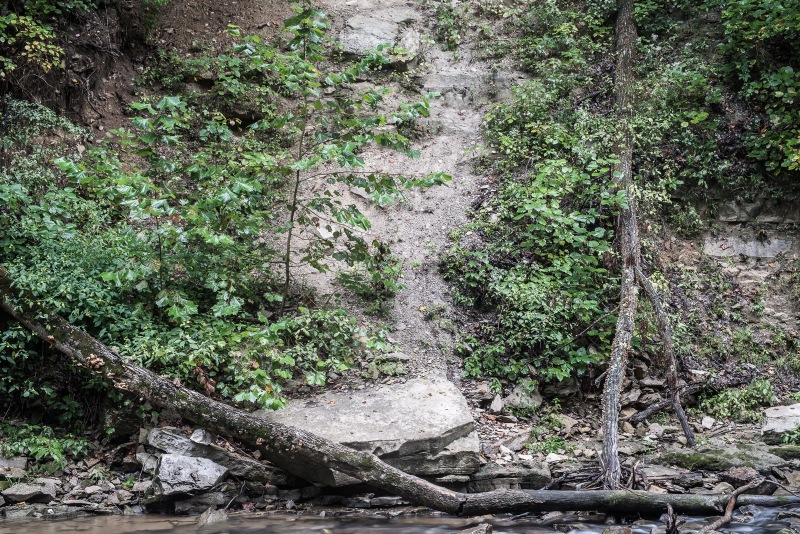 If they survive a few more years rock fall, floods, and human mischief, they will have outgrown the canyon and dominate the scene for years beyond me and you. 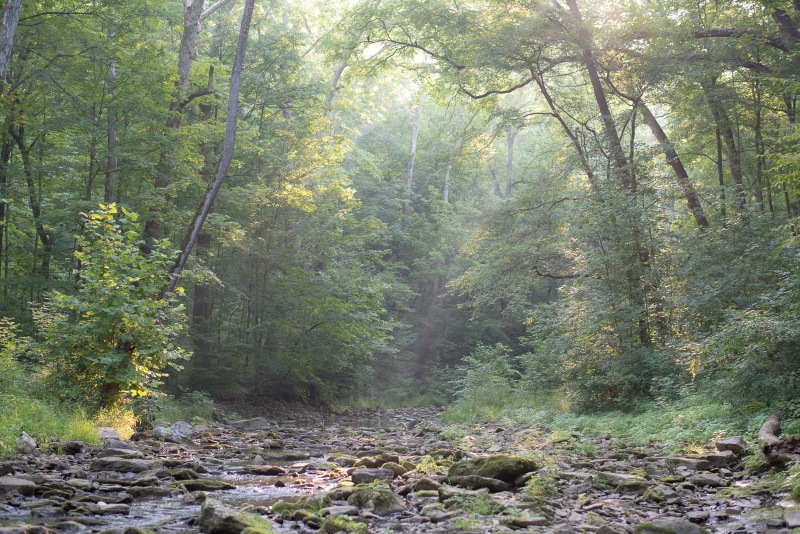 By the way, read that book in the title. It is better than I think.

The attempt was to make an embedded minimal sphere with 3 ends. Two ends is easy: the catenoid will do. If you want more, the ends can only be catenoidal or planar, and the catenoidal ends need to point in the same direction, i.e. have the same limiting normal. Such a sphere will always have what is called vertical flux, which is disastrous in its usefulness.

Whenever you have vertical flux, you can deform the minimal surface in a very simple way, keeping the catenoidal ends vertical but tilting non-horizontal planar ends like above. This is nice but also disastrous because it allows to prove that embedded surface of this sort cannot exist.

This is a famous theorem by Francisco José Lópe and Antonio Ros. The proof consists of three steps: If the surface is embedded, its stays embedded for all parameter values of the deformation. Secondly, if such a surface has either a planar end or a finite point with vertical normal, it cannot stay embedded. These two steps imply that such a surface can only have catenoidal ends and no points with vertical normal. Being a sphere then implies that there can only two ends, and we have the catenoid.

It is amusing to make more examples of surfaces with vertical flux. Above are single periodic versions with vertical catenoidal and annular ends. The first one feels a little bit embedded because the only intersections that happen are those of a catenoidal end with a translational copy, and I am inclined not to count that.

There is curious little town near Bloomington I haven’t written about that fits into my series of occasional posts about towns with a past (Hollbrook, Jerome, Leadville). 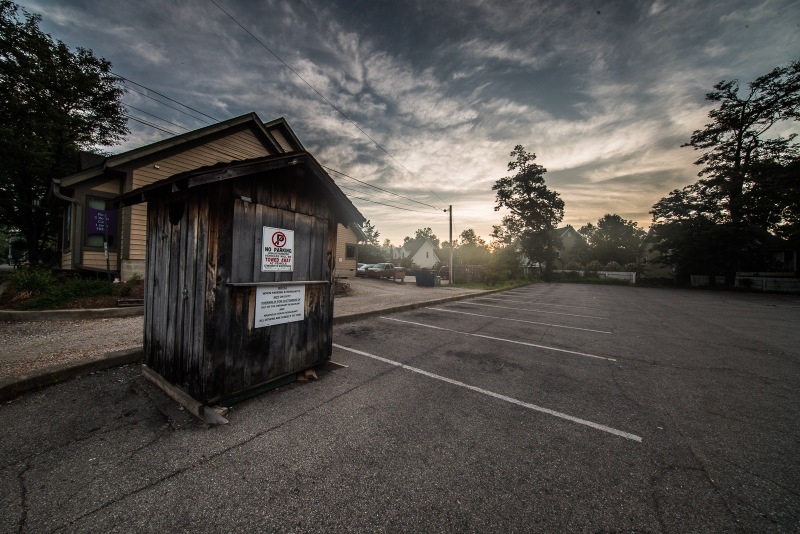 This is Nashville, Indiana. Getting there early in the morning is smart, because then you get free parking and avoid the crowds.

The attraction? Nashville used to be an artist colony. Locals doing their thing and having a good time. Their good sense of taste brought others with taste, and the town flourished.

It still does, but with the money people arrived with more sense for money than taste. 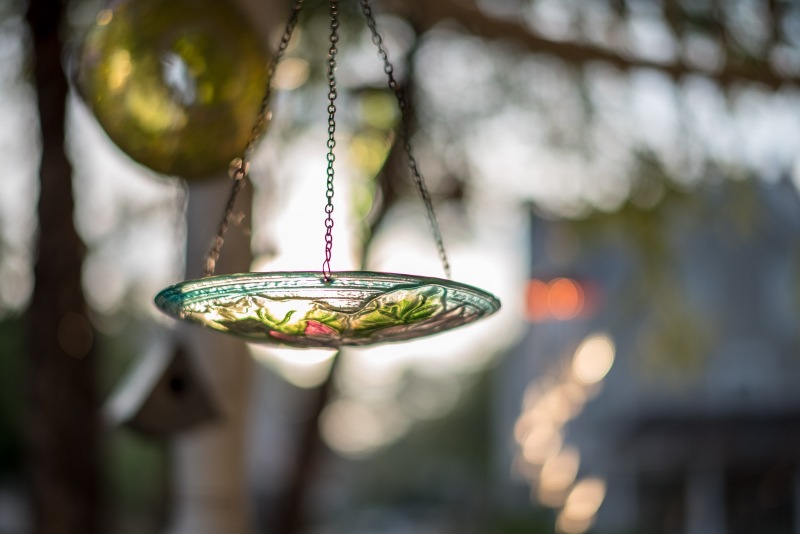 Occasionally there is still a trace of the former times left, like below in the inconspicuously elegant choice of a color pallette. 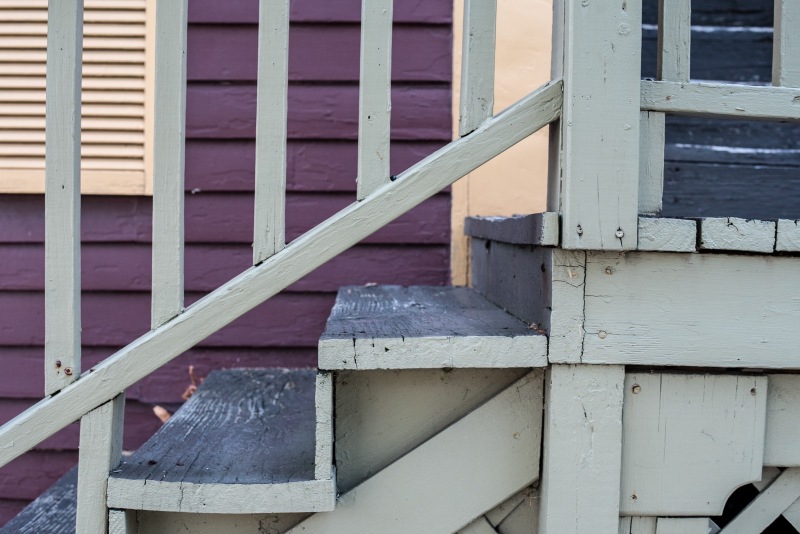 In March we had a look at the Schwarz H surface, and it is time to revisit it. We begin by turning it on its side, for comfort: 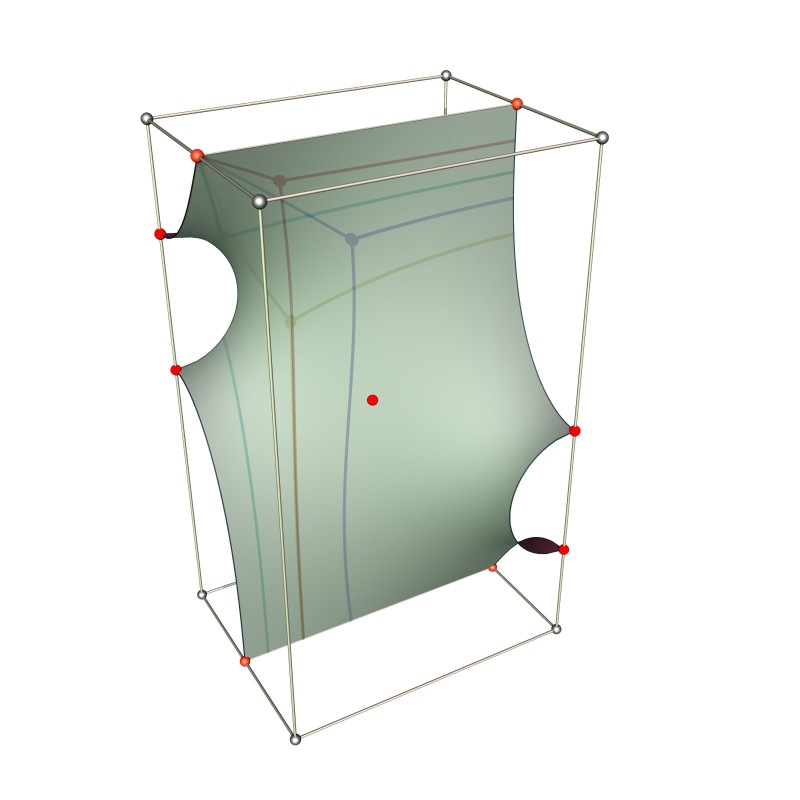 The H-surfaces form a natural 1-parameter family with hexagonal symmetry. It turns out that in this representation one gains another parameter at the cost of  losing the hexagonal symmetry. This allows to deform the H-surface into new minimal surfaces, and the question arises what these look like. To get used to this view, below is yet another version of the classical H-surfaces near one of its two limits. 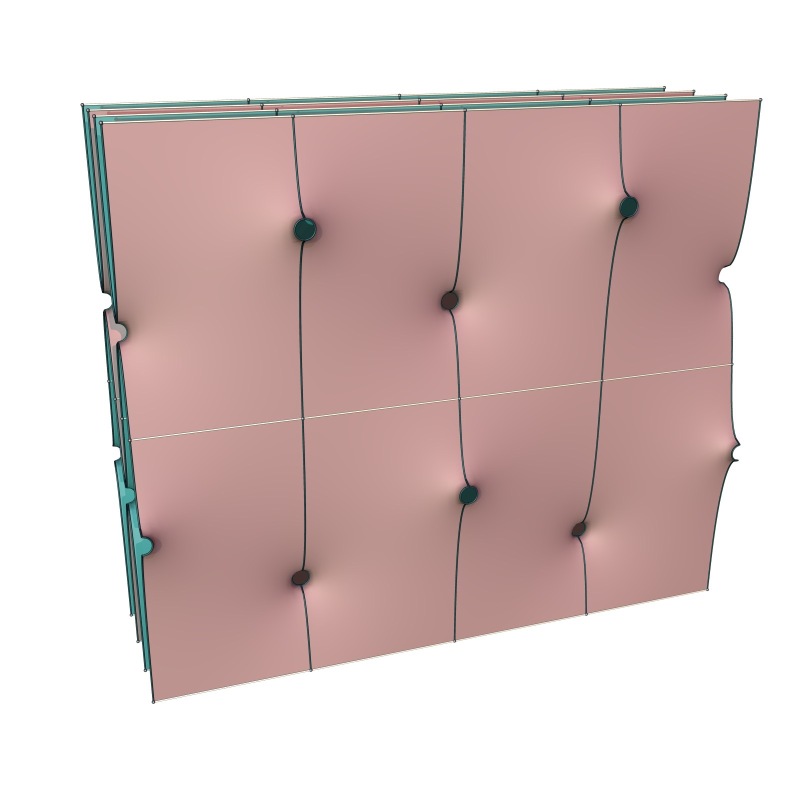 The new deformation allows to shift the catenoidal necks up and down, until they line up like so: 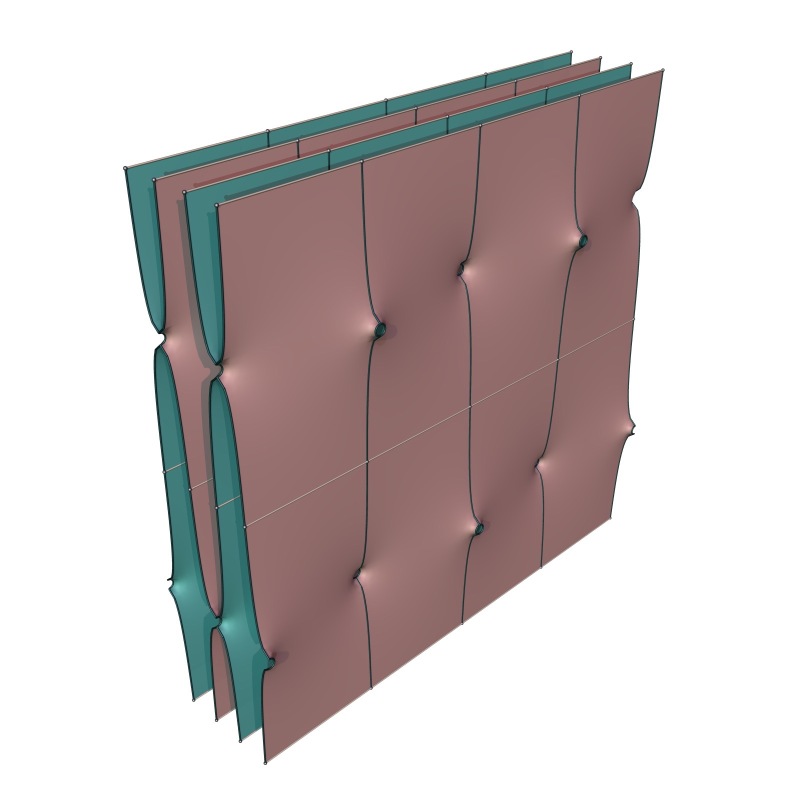 This is remarkable because the H-surface does not belong to the Meeks family, but to another 5-dimensional family of triply periodic minimal surfaces that is much less understood. The final image is another extreme case of the newly deformed H-surfaces:

After drinking mimosa tea, the mind opens up to the beauty of the tree. 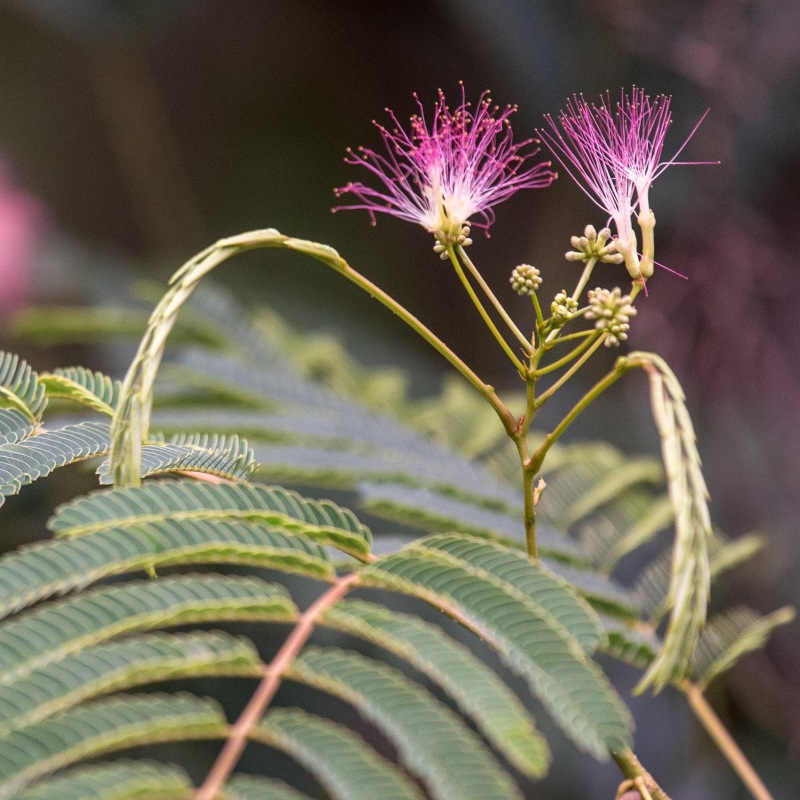 The flowers sit like alien insects above the fern shaped leaves, an odd contrast both in shape and color. 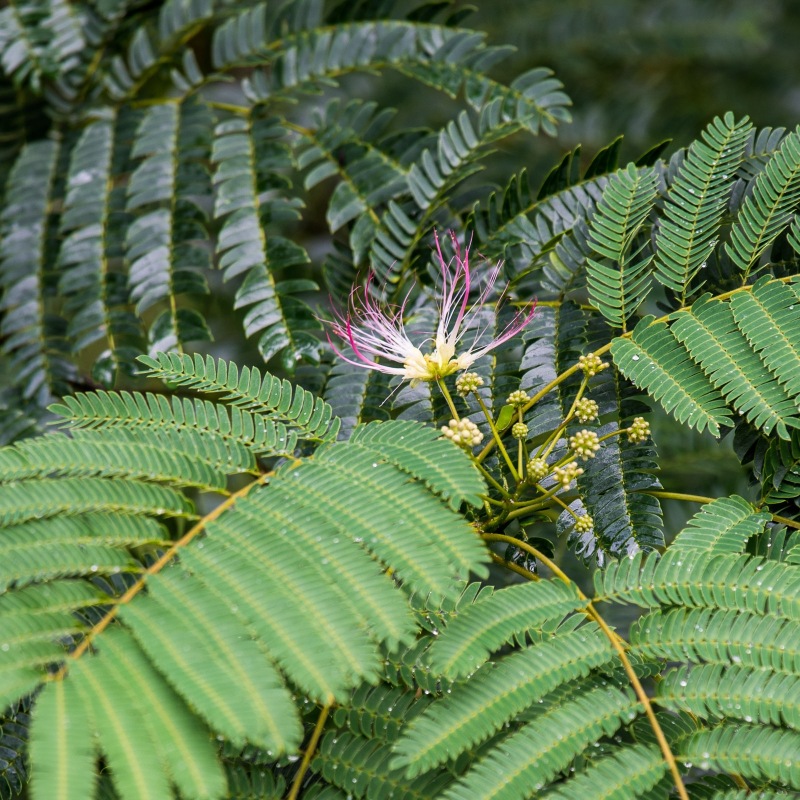 When in late summer the seed pods join in, we get  in a single picture the story of an entire life en miniature. 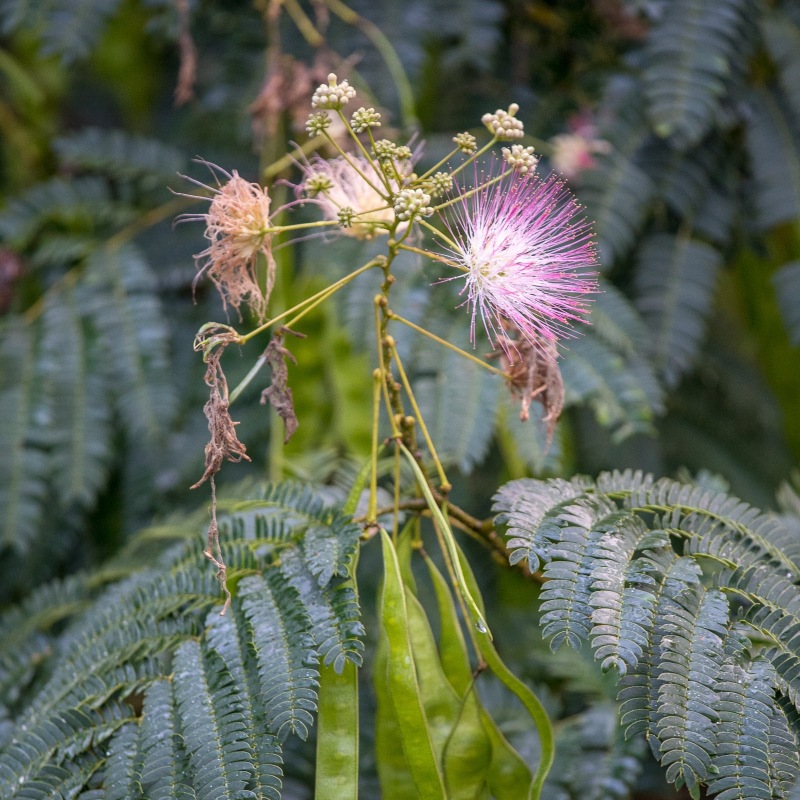 Mimosas are fascinating for many reasons, and animals know about it. I am not patient enough for wildlife photography, so the image below says nothing about my skills but everything about the abundant presence of the hummingbirds. 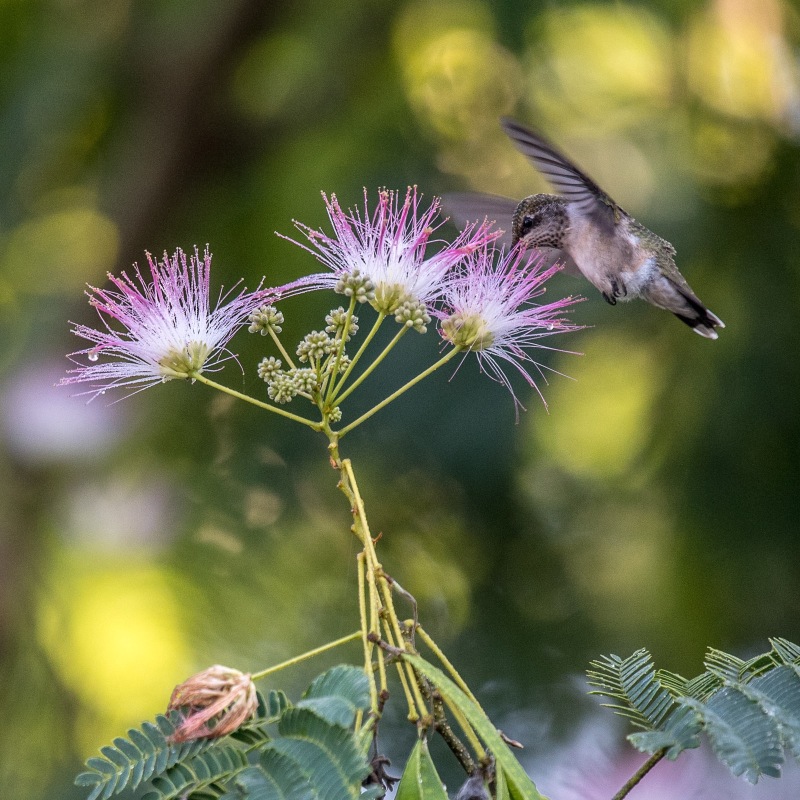 What else could one possibly desire but sit back and watch all this.