After many cool and sunny days, we had a bit of rain yesterday, and the morning today brought out the glorious early fall colors of southern Indiana. 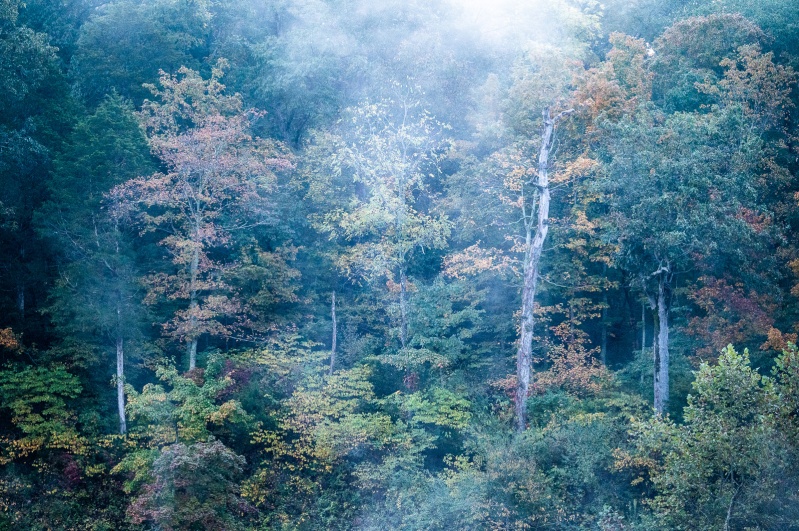 What better could I do on today’s evening than to sort through the pictures I took before sunrise at Spring Mill’s State Park? 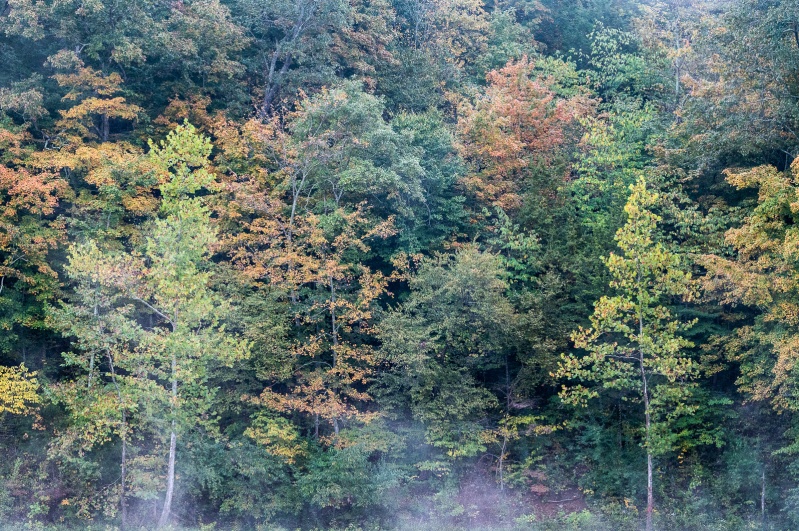 There was dense fog over the lake, making things a bit spooky, but I decided to just show the trees. 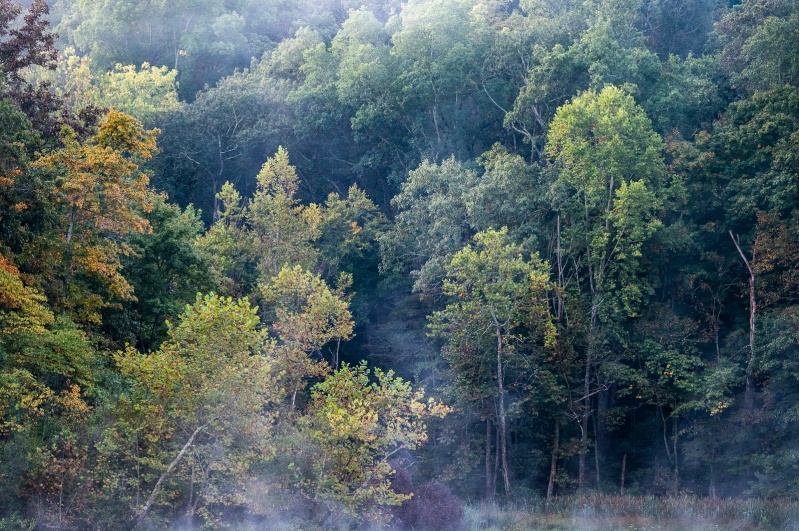 If trees get along for half a century and longer growing together, why do we humans have such difficulties with it? 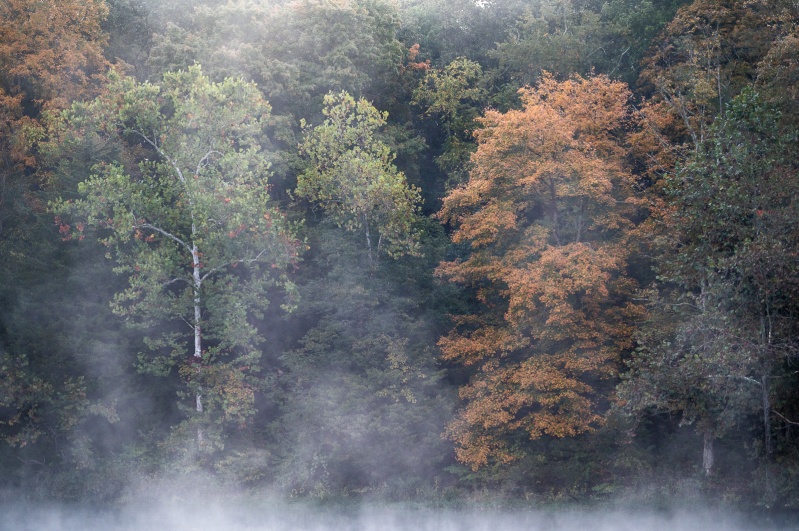 Have we stopped growing long ago, and become dry and gnarly? 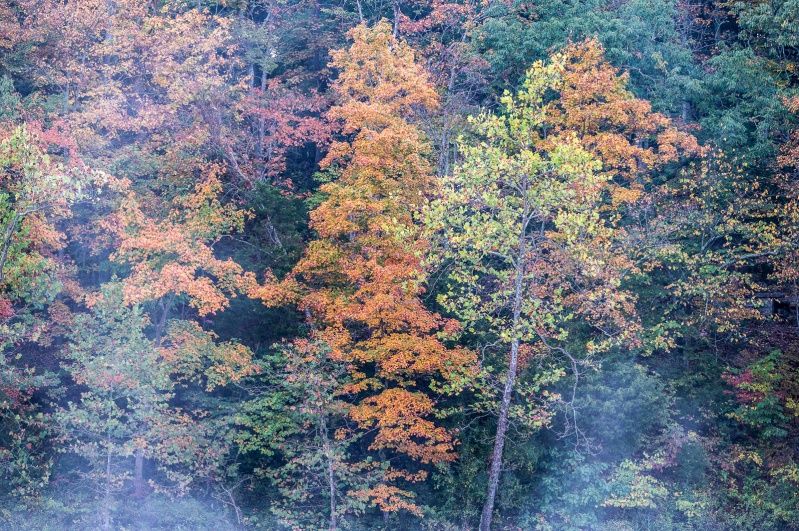 Let’s enjoy each other and not spawn hatred. 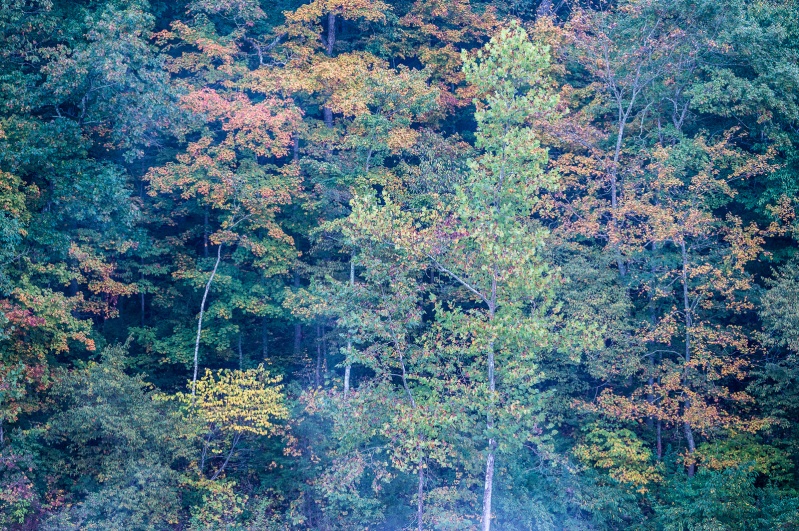 Winter will be here soon enough.

There is, of course, the other, darker view of things.

In a swamp, things like to be messy, and so do we.

Mess, we think, can be cleaned up, but there are other things, like a constant harsh contrast between light and dark,

or, worse still, an unsharp uncertainty.

There are times when neither horizontal nor vertical means support,

or when it overwhelms.

This is a wondrous place. I will return soon. And leave again.

There are many ways to experience a place, or a person.

The Twin Swamps Nature Preserve in the south-western corner of Indiana features two swamps, and today we will look at the less challenging aspects of the Cypress Grove there.

The water level was low, exposing the adorable cypress knees to the fullest.

This is a completely alien biotope, and still our own concept of beauty applies.

I keep wondering: Is this because our concept of beauty is so naive, or so universal?

As we can see, I am still playing with the triptychs. Water and trees provide the necessary support.

Support is also given by color, but the colors of summer are fading. Fall will be here soon, and then winter. Some of us will stay, some will leave.

Today we introduce the dual pillows:

They arise as follows: Take a tiling by pillows, and practice social distancing. The gaps between the pillows will instantly become occupied by the dual pillows, like so: 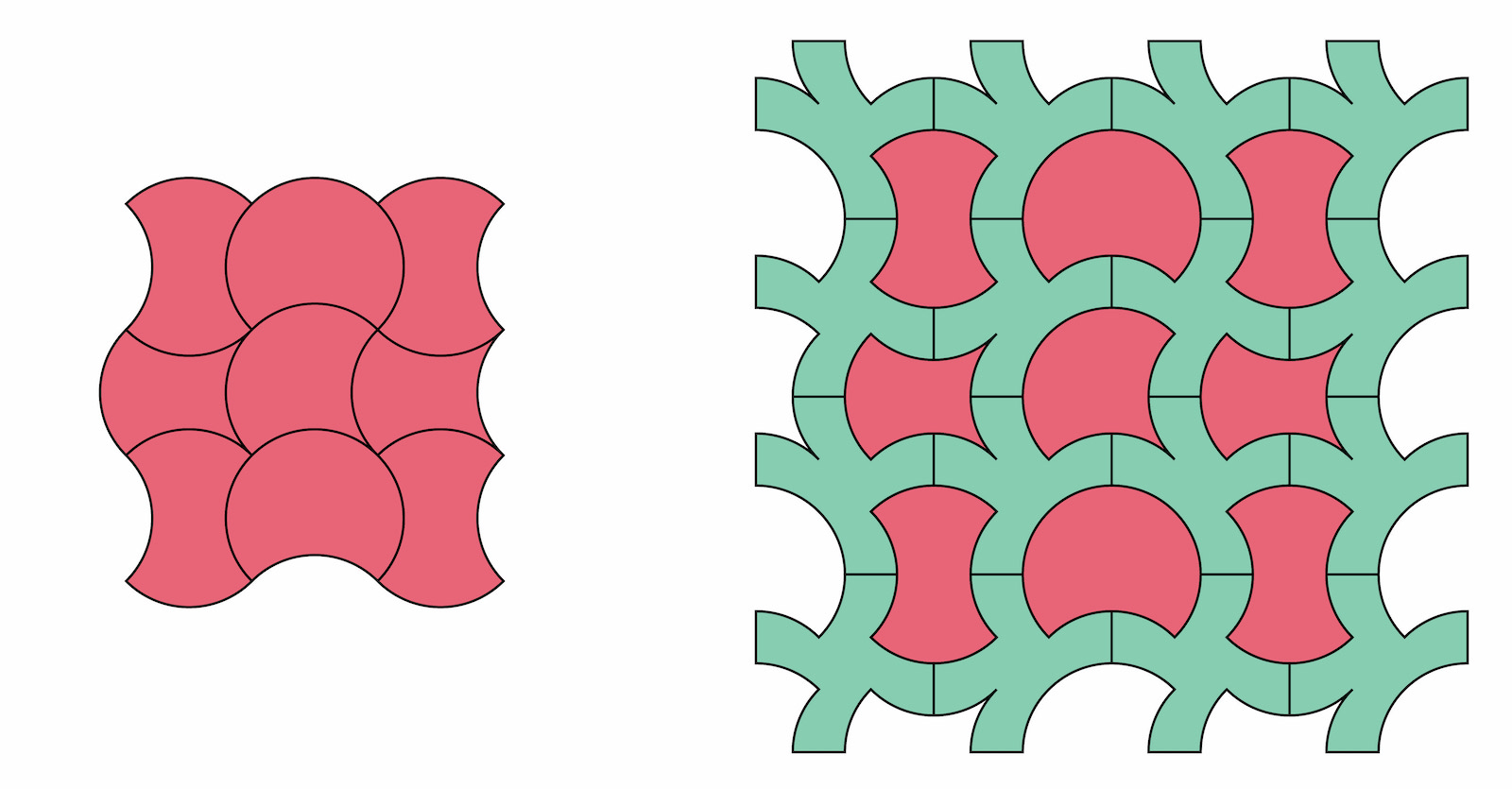 While the dual pillow don’t look anything like the standard pillows (which also don’t really look like pillows, I just wish they would), they are nothing but real pillows, which might be the quintessence of any duality. To see this in this instance, let’s switch to the arrow representation of pillows I introduced to make Alan Schoen’s cubons accessible to flatlanders:

A pillow is replaced by a cross where an arrow pointing away from (resp. towards to) the center represents a pillow bulge inwards (resp. outwards). A tiling by pillows becomes an oriented grid graph. Rotating every edge of this grid graph about the center of teh edge by 90º and changing its color from orange to green creates the oriented dual grid graph, which we can now interpret pillows or dual pillows. 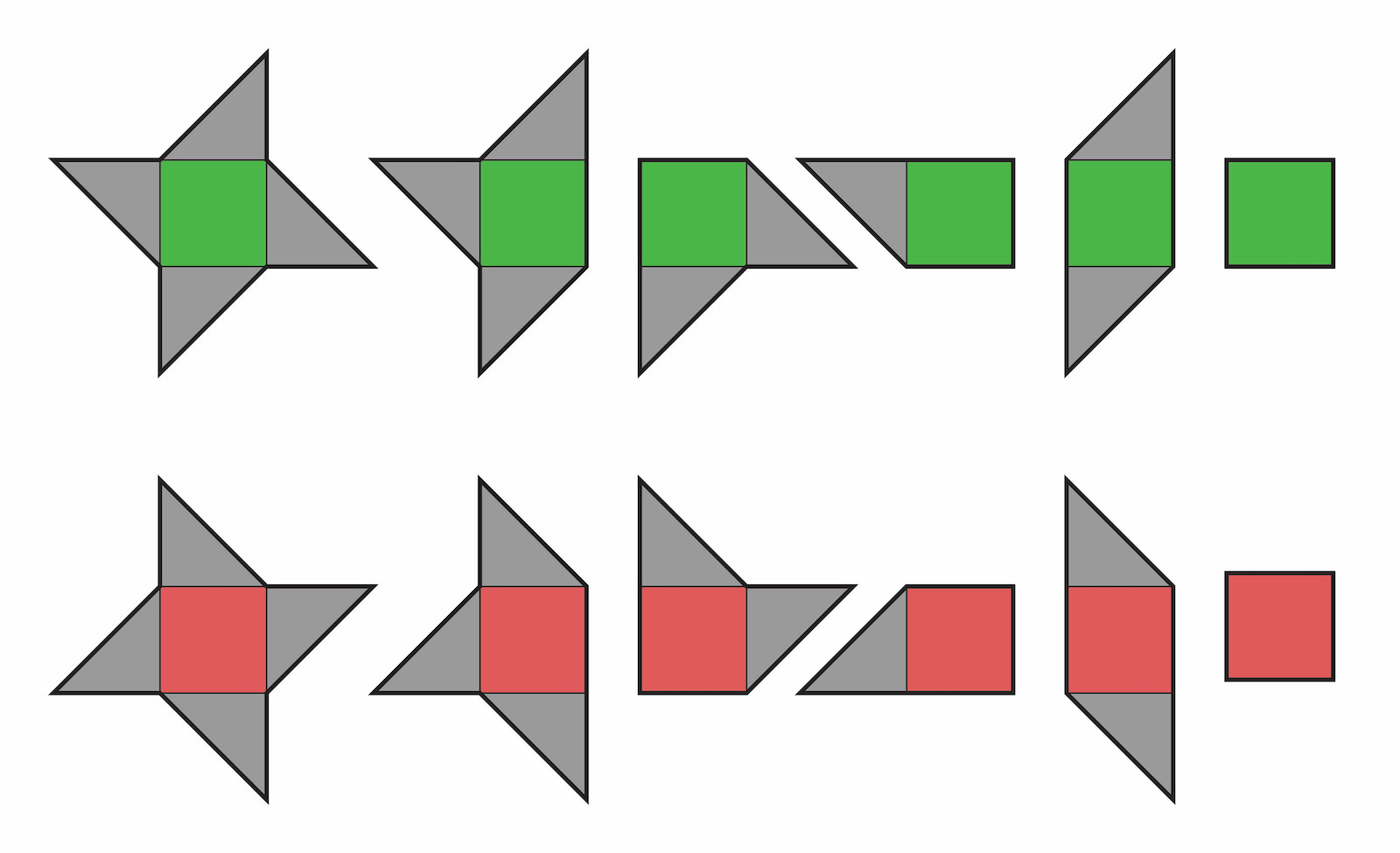 Purists will suffer under the different appearance of pillows and dual pillows. So above is a more sober but completely symmetric representation of pillows and their duals. They, as well as their more baroque counterparts, can be used for puzzles and games.

Above to the left is a 3×3 board game. It is easy to fill it with the abstract pillows / dual pillows so that colored squared are correspondingly covered and gray triangles never overlap. But you can do this competitively, green and red taking turns until one player can’t place a tile anymore.

Or, if you still prefer isolation, can you tile a larger 6×6 board with 6 sets of pillows and dual pillows?

The title of László Krasznahorkai’s second novel can be seen as self-referential. The long sentences have to be pried out of this book.

By doing so, we uncover layer after layer. At the surface, there is a small town, taken over by a demagogue and a willing mob, resulting in destruction.

Then there is the conflict between individual interests and mass euphoria. The former are represented by János Valuska, a modern day Prince Myshkin, and musicologist György Eszter. Both encounter the whale, one of the ominous riddles of the book.

Mysterious in its incomprehensibility, it strongly affects János, but leaves György unaffected. So there is a second layer of contrast, namely how individuals resist. Neither János nor György are successful, as becomes dramatically clear when the mob enters the hospital.

After senseless destruction, the mob faces a completely unarmed victim, not understanding that the dumb fear, the utter lack of resistance which allowed that victim to bear this onslaught, was increasingly robbing them of power and that, faced by this sapping mire of unconditional surrender—though this is what had hitherto given them the greatest, most bitter pleasure—they would have to retreat.

After this, innocent János, who has witnessed this as an accomplice, descends into madness, while György seeks restitution.

There are more layers. There are the roles of art and spirituality, again represented by György and János. The brutally artificial Werckmeister harmonies that György studies are in conflict with the harmonies of the celestial bodies János dreams of.

Neither of them can succeed alone. And here we arrive at the melancholy: Maybe their resistance could have been successful if they could have found a common ground.

After introducing the six small octons, let’s talk about the larger octons a bit, that allow to divide the octahedron edges in the proportions 1:3, 2:2, or 3:1. There are 24 of them, suggesting to assemble four octahedra with them. This is Alan Schoen’s original version. 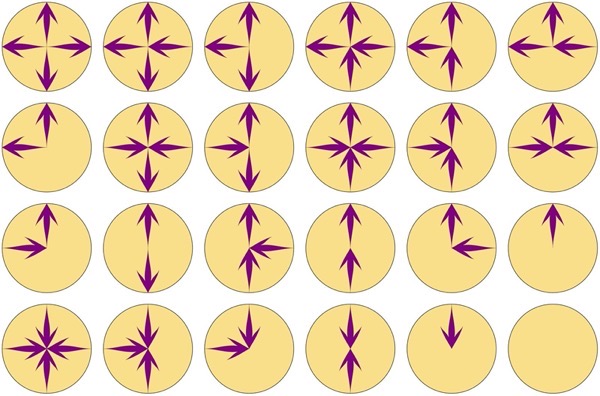 These octons can be represented as decorations of the vertices of a planar graph using the 24 coins above.

Above you see the octahedral graph, decorated on the left with the six chiral octons (or coins). The rule for placing them is simple: All edges must have either arrows with matching directions, are no arrows attached to them. Besides the one solution shown above for the chiral coins, there are three more, up to symmetry, which are indicated below in the octahedral subdivision:

They are not so easy to find. To avoid duplicating a solution, just place one coin exactly as in the decorated graph on the left, and complete its in a different way.

We have already seen the 10 different ways to place the six cubons without 2:2 ratio (i.e. with four arrows in a coin) the last time. What about the remaining 12 cubons? There are 12 different ways to split them into six so that one can assemble them into two octahedra. Below is an example how to split them, assembling them is another puzzle, and finding the remaining 11 ways is really hard and tedious.