Euclid allows us to place four squares around a vertex. If we are not satisfied with that, we can either move into the hyperbolic plane, or into space. A neglected configuration is that of five squares parallel to the coordinate planes that meet at a common vertex, like so:

This is, as you convince yourself quickly, the only way to to this, up to 24 symmetric cases. The squares trace out a polygonal arc on the faces of the cube above, which we can interpret as a marking of the faces of the cube that contains the five squares. Two faces are marked by a straight segment (front and  left), three by an L-shaped segment (back, right, top), and one face is unmarked (bottom). As we did with the simple six color marking, we can centrally project the 24 cubes into the plane.

The image above shows six of these projections. The remaining ones can be obtained by 90 degree rotations. I have colored the faces of the cube to indicate what the path is doing within that face (green=go straight, blue=turn one way, orange = turn the other way, gray=don’t be there). Convince yourself that the colors suffice to reconstruct the path.

Thus we obtain a set of six tiles that allow us to explore layers of polygonal surfaces that have five squares around each vertex. For prettification, I have dropped the path and filled in the hole. No information has been lost. We are allowed to place tiles next to each other if the colors match. This is it: 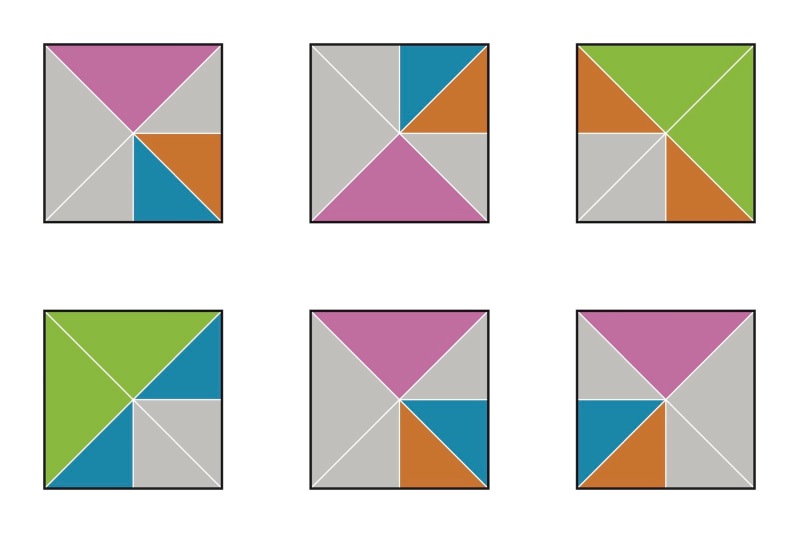 Here is a simple example of such a surface.

It is triply periodic and incidentally related to Schwarz P minimal surface. Two consecutive horizontal layers are represented by the two tilings below:

So, we have the burning questions: Are there more polyhedra like these, do the tilings help us, and can we understand the tilings? More about it in a week or two.