After the translucent dominoes let’s continue with translucent L-trominoes. There are eight of them:

The dark-gray one is a solid tromino, which will be a bit lonely, as it can’t connect to the others.

As before, a region is tiled if either any square is covered by a solid color or by two translucent (gray) squares. 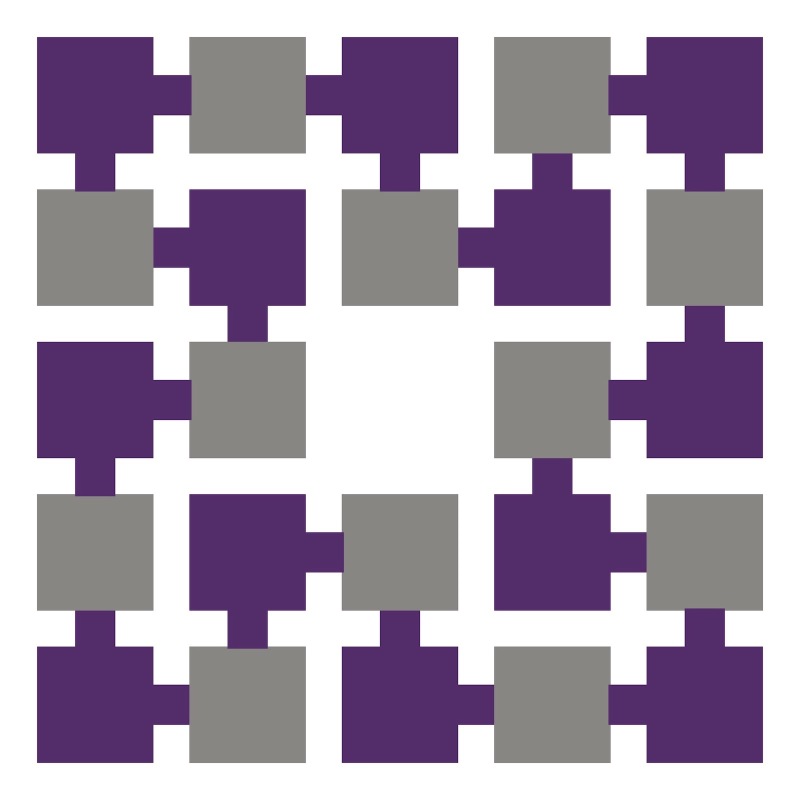 Let’s begin with a simple puzzle. Above you see an attempt to tile the 5×5 square just with copies of the purple tromino. This is of course impossible, because each purple tromino tiles 1+1/2+1/2 = 2 squares, so it can only tile regions with an even number of squares. Clearly one can tile a 2×2 square, and thus every 2n x 2n square. But can you also tile a say 6×6 square so that the tiles are all connected?

Above is an example how you can tile a 5×5 square with two copies of each tromino except the orange and the dark gray one. There is an abundance of tiling problems like this. You usually begin by determining for a set of tiles the total number of squares they will cover, counting each gray piece as 1/2. As all eight trominoes cover 18 full squares, two sets of them should be enough to cover a 6×6 square. One solution is shown below.

This suggests the following cooperative game for two players: Each gets a set of the seven trominoes without the dark gray one, shuffled, and stacked face up. They take turns by either

The goal is to leave at the end just room for the two dark gray trominoes. The example above is therefore no solution, because the network has too many components.