Up above is Meinhard Wohlgemuth’s first surface. It is very similar to Costa’s surface, but has one more end and genus 2. In Mathematics, like in every experimental science, you gain intuition about truth through observation. For instance, every minimal surface person I know will probably believe in dihedralization.

Whenever you have a minimal surface that has two vertical symmetry planes making an angle π/2, there should be more symmetric version where the planes make the angle π/n. Like up above for n=5, observed for Wohlgemuth’s first surface.

Then there is Wohlgemuth’s second surface. It has genus 3, squeezing in a little suspicious handle between the two planar ends, so that it looks a little bit like two copies of the ill-fated Horgan surface stacked together. But this time it works, one (Meinhard) can prove this surface does indeed exist. So, let’s make it more symmetric:

This is what I get when I run the experiment. The parameter values are so extreme that I don’t think this actually exists. So, do we trust our intuition, or the experiment? Neither. The only way out is to dig deeper. Let’s cut Wohlgemuth’s surface open (in half, to be acurate). 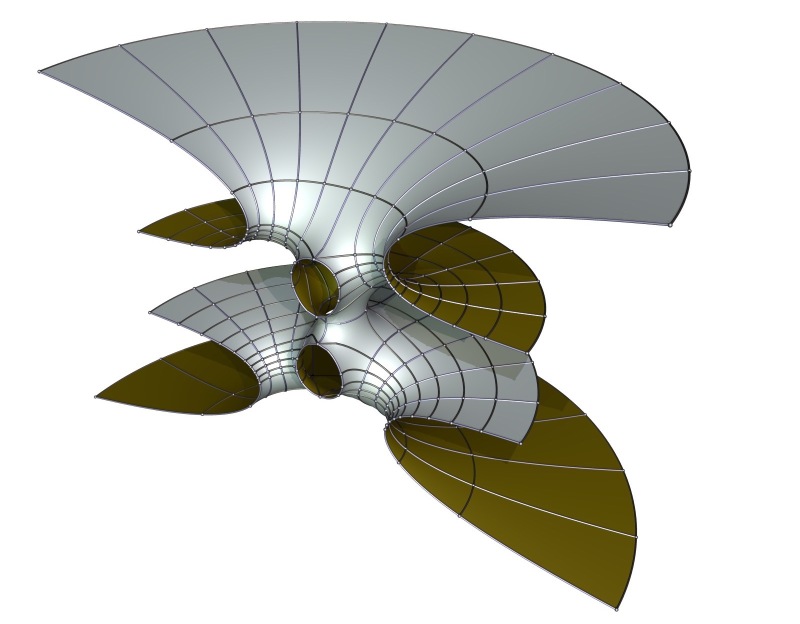 We can now apply the dihedralization continously, slowly increasing n=2 to n=3, thereby tracking the numerical solutions. They show a clear deformation,up to approximately n=2.9 (below).  After that, the periods don’t close accurately enough anymore to make me feel confident about the surface.

So I tend to think that this is the first case where dihedralization fails.