Another favorite game/puzzle of mine are domino-variations. For the moment, we will allow to lay out the dominoes only as horizontal strips, and, in contrast to traditional rules, we allow non-matching pieces to be adjacent. The two half-dominoes at a connection we call a link, and as two half dominoes can be combined to a new domino as shown in the second row below, the links become new dominoes in their own right. 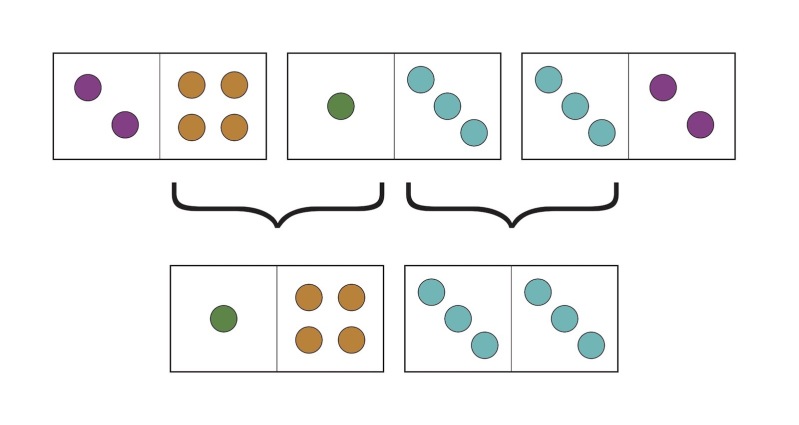 Today’s first game I call Domilogue, and it is a 2-person game. By now all practicing solitaire players will have acquired the ability to impersonate a second player, so this should not be a problem. Beginning with this game instead of with the puzzle below makes it easier to explain the mechanics. Domilogue is cooperative. Both players need one set of six dominoes containing all dominoes with one to three eyes as shown on top. The game begins with each player selecting from their set one domino that contains a 1, and placing it in front of themselves. We assume they are seated opposite each other, at distance of 6 feet, wearing masks and gloves.

For the following moves, there is only one rule: The last played domino of one player must represent the link for the next domino the other player plays. To complete a move, they choose again a domino from their pile and add in on either side of the strip so that the link with the piece they connect to is the domino that the other player played in the previous move. Above you see the first two moves, with numbers reminding us when a domino was played, and arrows indicating which domino is responsible for which link.

I hope you find this rule sufficiently mind bending.

After three more moves, both players in my sample game have one domino left and are stuck. We see in these example moves that the orientation of a domino can differ from the orientation of the link it is responsible for. The goal is of course to get rid of both piles. Grab a partner or your other self, and give it a try.

After learning the mechanics, above is a solution to a solitaire variation. In it, you are asked to arrange two sets of all six dominoes in concentric circles as above so that dominoes in the outer (inner) circle are the links for the two dominoes they touch in the inner (outer) circle. This allows for plenty of puzzles: For instance, start with one domino each in the inner and outer circle, and try to complete the circles. Or, make larger circles, either by taking two sets of the six dominoes, or one set of the 10 dominoes that also have squares with four eyes, as in the template below.