Continuing the discussion from last week, let’s consider the 3-letter alphabet {r,s,t}. We are allowed to form all possible words in these letters (and their inverses, if you want to), but we agree that rr=ss=tt=1 and (rs)^2=(st)^3=(tr)^6=1. This defines the Coxeter group G(2,3,6). Last time we saw that the very similar group G(2,3,3) is finite, today we will see that G(2,3,6) is infinite. Below is the beginning of its Cayley graph.

We travel from one word to the next by appending r,s, or t. This looks much more complicated than what we saw for G(2,3,3), but things become clearer when we look at another group. Consider a yellow triangle with 30, 60, 90 degree angles (writing this as π/2, π/3,π/6 makes 2-3-6 reappear), and let ρ, σ, τ be the reflections at the lines extending its edges. 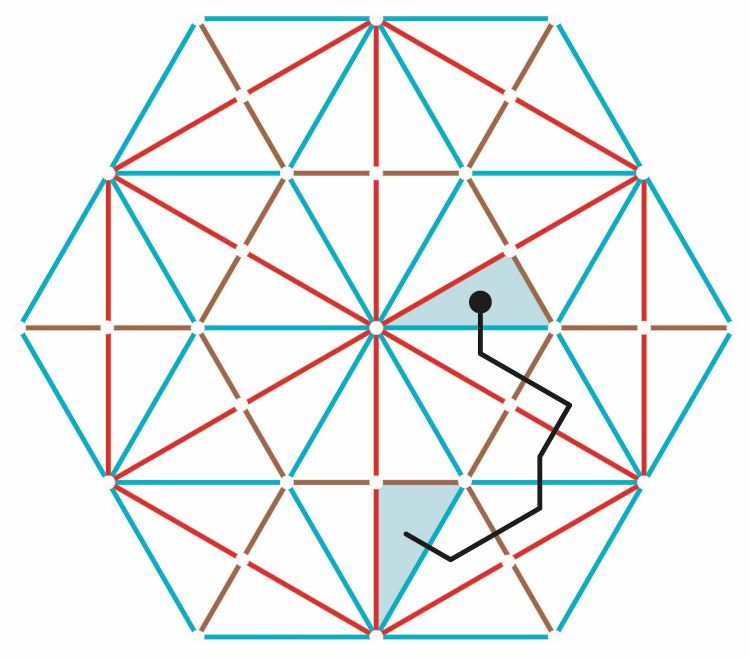 Let’s look at the word tsrtst. Reading it from left to right gives us a path on the Cayley graph from the initial triangle to a target triangle. Translating from Latin tsrtst to Greek τσρτστ gives a composition of reflections that takes the initial triangle to the same target triangle. This is not completely trivial, you prove it by induction. Remember that the composition is applied from the right to the left, so we also change reading direction.

This observation can be used to show that the translation map G(2,3,6) to Γ(2,3,6) is injective. If a word in G is the identity in $γ, its path in the Cayley graph must be a closed loop. As the Euclidean plane where the tiling lives is simply connected, we can homotope it to a constant path, using elementary operations: Backtracking an edge, or shrinking a loop around a vertex to a point. The former is the accomplished using the relations rr=ss=tt=1, the latter using the other relations. This shows that the geometric homotopy can be realized using the relations of the group, and thus we can reduce the word to the trivial word 1.