After successfully transforming rectangular images into circular ones it is time to do something with them. We have seen already that the one can deform them by shifting one point somewhere else. This is very much like rotating a globe.

But besides these angle preserving symmetries of the disk there are other maps from the disk to itself that also preserve angles but are not anymore 1:1. These are the Blaschke products, written in complex notation as follows.

Let’s look at a simple example with just two factors, and choose the a-parameters to be 1/2 and -1/2. Then B(z) maps the double spiderweb on the right to the standard spiderweb on the left: 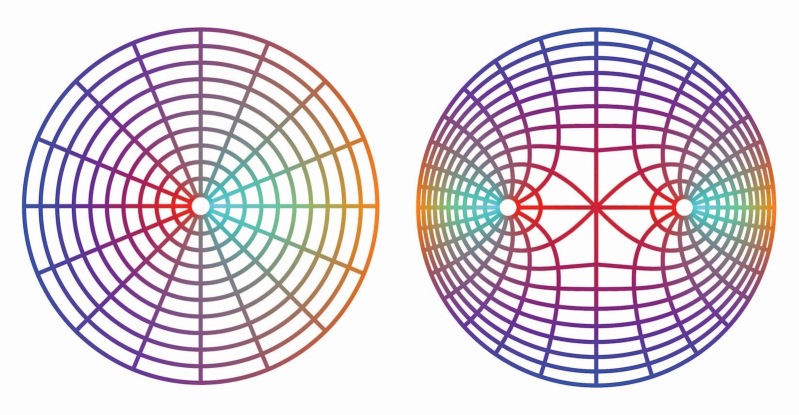 In other words, by taking preimages (or better, by using B(z) to pull back an image…), we can create multiple copies of a circular image within a circular image. The a-parameters designate the locations of the “centers” of the multiple spiderwebs where the strands converge.

For instance, above is a circular image of a Spring wild flower, and to the left its 3-fold mutation. Below are 5-fold mutations with two different choices for the a-parameter.

and here we have a large copy of the original budding trillium at the bottom with two smaller copies to the left and right.

2 thoughts on “Playing with circular images”