If you search the internet for Cemeteries at Hallesches Tor, you will find blog posts about this cemetery, and some of them mention an encounter with a friendly middle aged man.

This is another one of these blog posts. I, too, met this person, and received the best history lesson I had in my entire life.

For instance, I learned about the strange markings on many graves that look like gun shot holes. They are from gun shots, inflicted in one of the many utterly senseless battles of the Second Word War, when the Nazis forced teenage boys to confront the Soviet army, with only a handful of ammunition and no hope but death.

Or about the bunker that the Nazis build on this cemetery after making room by eliminating all traces of the Jewish graves, a bunker that was never used as it filled instantly with ground water, a bunker that has resisted demolition ever since, a bunker that couldn’t be more meaningless.

Or about the grave of Archduke Leopold Ferdinand of Austria, one of the last hopes of the Austrian Monarchy after the assassination of Archduke Franz Ferdinand in Sarajevo, one of the escalations that led to the First World War, but who happily renounced his title in order to marry the sex worker Wilhelmine Adamovicz. His grave (together with this third wife Clara Hedwig Pawlowski) is reportedly still visited yearly by mourning monarchists.

Other visitors commemorate E.T.A. Hoffmann’s death by following his request not to bring flowers but champagne…

And of course there are graves of mathematicians, like the one of the immortal Carl Gustav Jacob Jacobi, and less famous ones, like the one of Horst Kirchmeier, whose brave attempts to liberalize the German law governing sexual offenses went rather far.

I could continue my history lesson for a while. Or write about the symbolic of the cast iron fences.

Or about the massive thefts of tomb decorations that apparently sell world wide for enormous sums. Or what happened to the churches to which this cemetery belonged, and what buildings are there now… Another day.

There is more to a landscape – or a life – than the sum of its pieces. So maybe acceptance is not the only way to relate.

More and more it occurs to me that what really matters is our involvement with the place, or the person. And hence, what I am talking about here is not the place, but my encounters with it.

Each picture not only tells the story of such an encounter, but in turn offers the viewer an opportunity for other encounters.

I am not suggesting that there is meaning here, merely an attempt of mutual understanding.

By capturing these moments of dialogue, do we try to capture time itself, be it in its vague state of chaotic flow,

be it in the solid state of a rock face hourglass?

Entering Beaver Creek Wilderness from the Three Forks of Beaver Trailhead has the advantage that you get a view of the area before descending into the gloomy valley.

Signs are rare, trail markings sparse, and the trail itself often unrecognizable. The very humid landscape is subject to continuous transformation due to intense growth and decay, so I was initially grateful to be able to hang on to the rocks.

How does one esthetically tame a feral landscape like this? Instead of imposing structure, one approach is to embrace the wild complexity, and let it overwhelm.

Once you reach the valley bottom, you can follow Middle Ridge Trail along Beaver Creek upstream or downstream; the former offers better campsites (I think).

Hiking downstream has more rock formations, if you desire so.

Then, strangely, a rather wide wooden bridge: For what traffic?

After a while one gets used to the constant slipping in mud, tripping over roots, and breaking off rotten wood when attempting to prevent a fall.

One begins to look away from the rocks and to accept that the transformative power of this place, water, offers reflection, too.

Is this it? Why, is this not enough?

The abundance of Magnolia macrophylla was one of the my favorite attractions in Kentucky’s Beaver Creek Wilderness.

At this time of the year, the giant fallen leaves become an essential part of the ground cover.

Even the Beaver Creek itself is not safe, the unfallen leaves appear as reflections.

Many get stuck among their smaller friends in the process of falling,

or decide to go the last steps of decay just a few inches above ground.

The Designpanopticum is a small but densely packed museum in Berlin’s Nikolaiviertel.

Vlad Korneev has been collecting technical relics for decades and arranged them to make them even more bizarre, as if this was necessary.

If there ever was meaning, we can be certain that it is gone now.

This place is the exact opposite of a tabula rasa; it’s what I expect to find in my own brain, if I had the ability to climb into it and have a look.

Still, and non unlike the tabula rasa, this overloaded chaos gives us the opportunity to commence again, to consider this as fertile ground instead of as a mess.

Following the loop, stairs up and down, we find new ways to see, to make sense again, in an entirely new way.

Lost function becomes purposed beauty. Maybe this is not for everyone to see. It’s my brain, after all…

An excellent hike to warm up and adjust to altitude in the Holy Cross Wilderness in Colorado combines the Fancy Lakes and Missouri Lakes trails to a 8.5 mile loop.

The ascent via Fancy Lake is a steady climb without difficulties, and offers plenty of opportunities to contemplate nature, and the nature of loops.

There is the contrast to an In&Out, where you retrace your steps, an undoing — what remains is the memory of having been.

Towards Fancy Pass (at about 12,400 ft) we have climbed above tree level and the look back offers serene desolation, while the other side is an enormous open meadow.

From Missouri pass it’s a long but gentle descent to a chain of a dozen lakes with the same name. again offering time for contemplation.

Why do I like sad faces better than happy faces?

Good loop trails don’t really close. They seem to leave a small gap at the end, like a broken circle, an unfinishing.

We will come back, and try again, and again.

There is beauty in that, too.

Here are two circles with an eighth removed. As we can see, they can move together. What about adding more such broken circles? How densely can we slide them together? 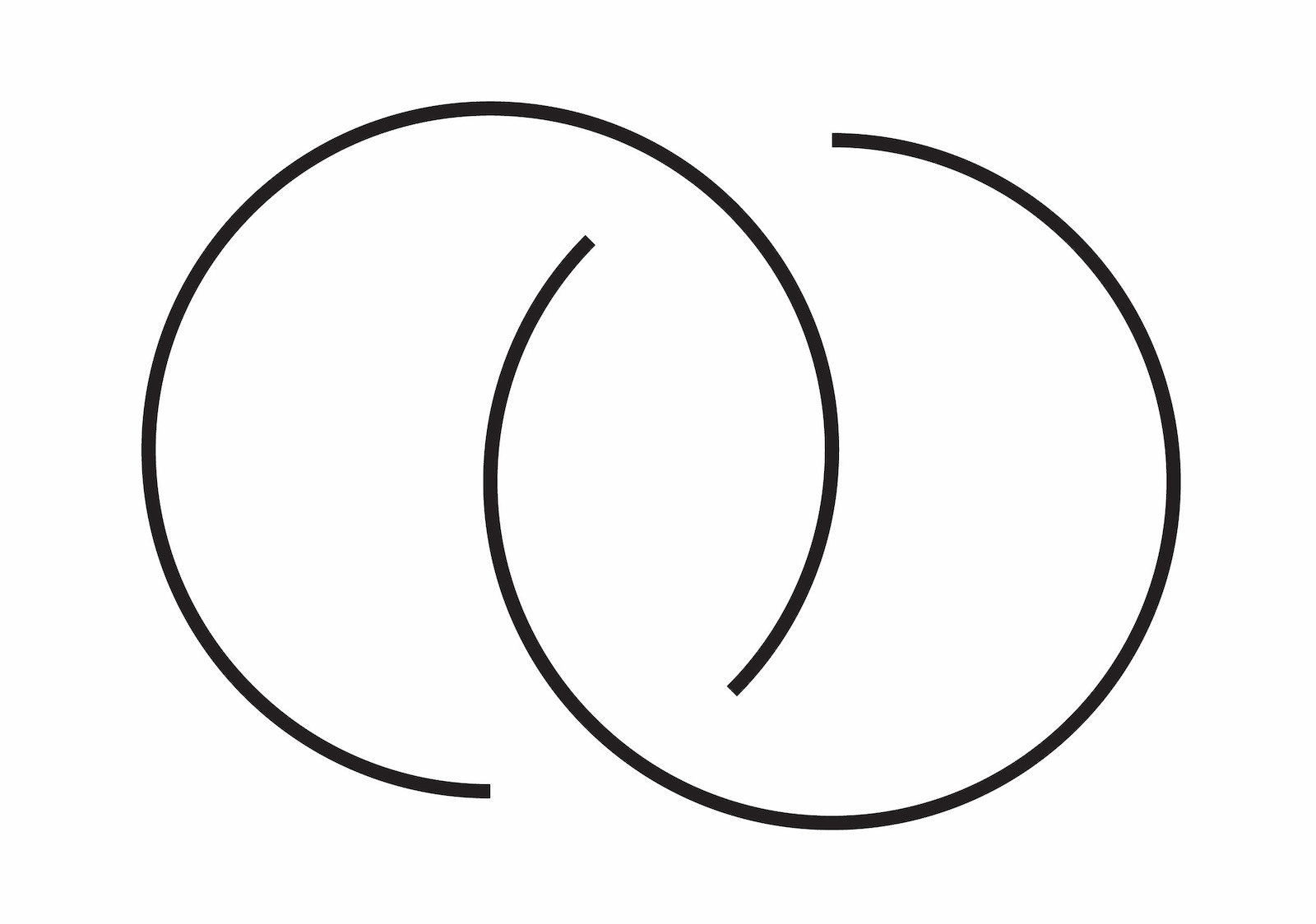 Here is an example with three circles, each one sixth missing: 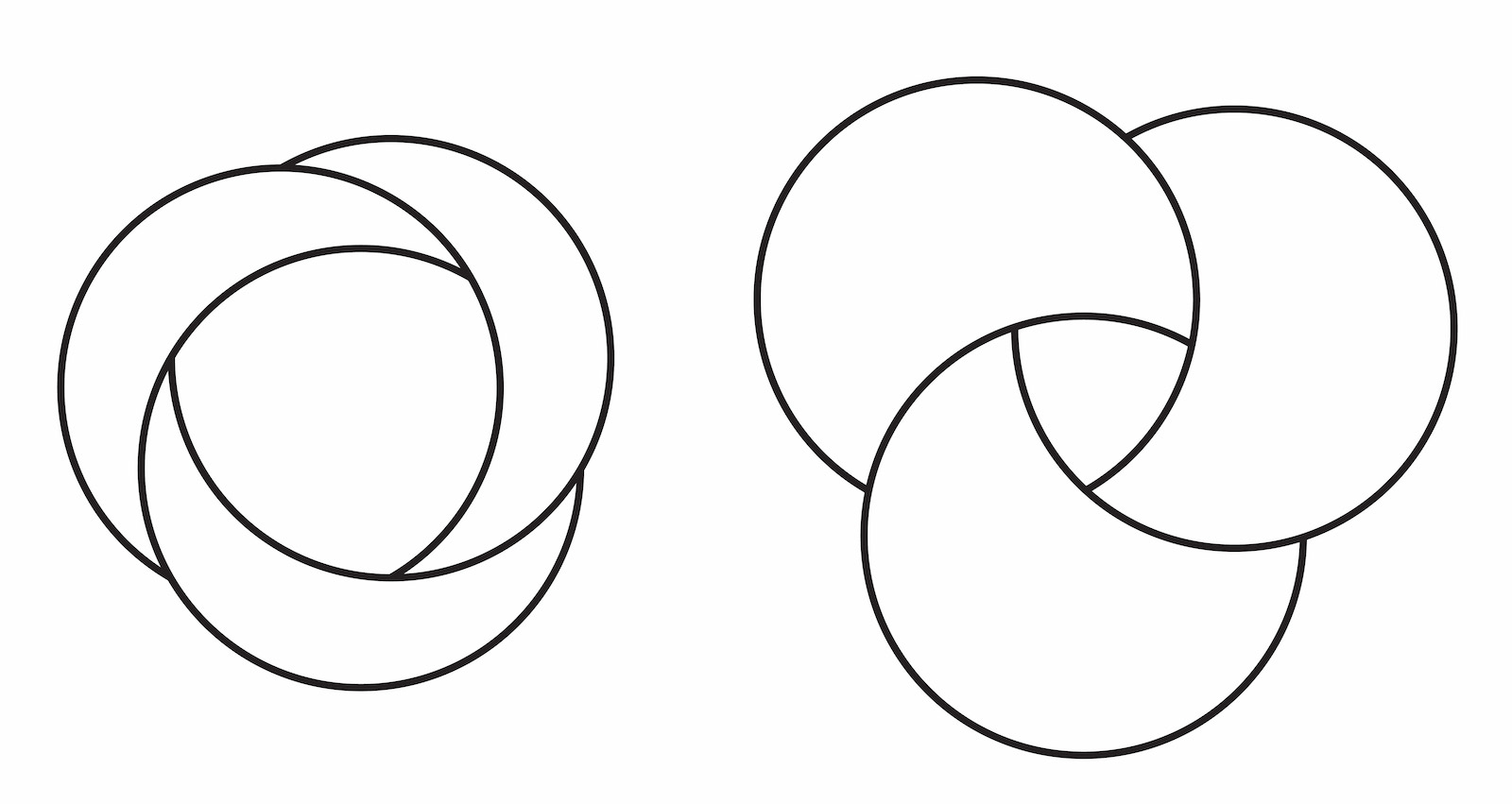 This is maybe a little bit remarkable: If you take two such broken circles and rotate them by 60º against each other, you can slide them along each other so that one end point of one circle moves on the other circle, and vice versa. The first question (which must have an easy answer, of course) is: why does this work for these angles? 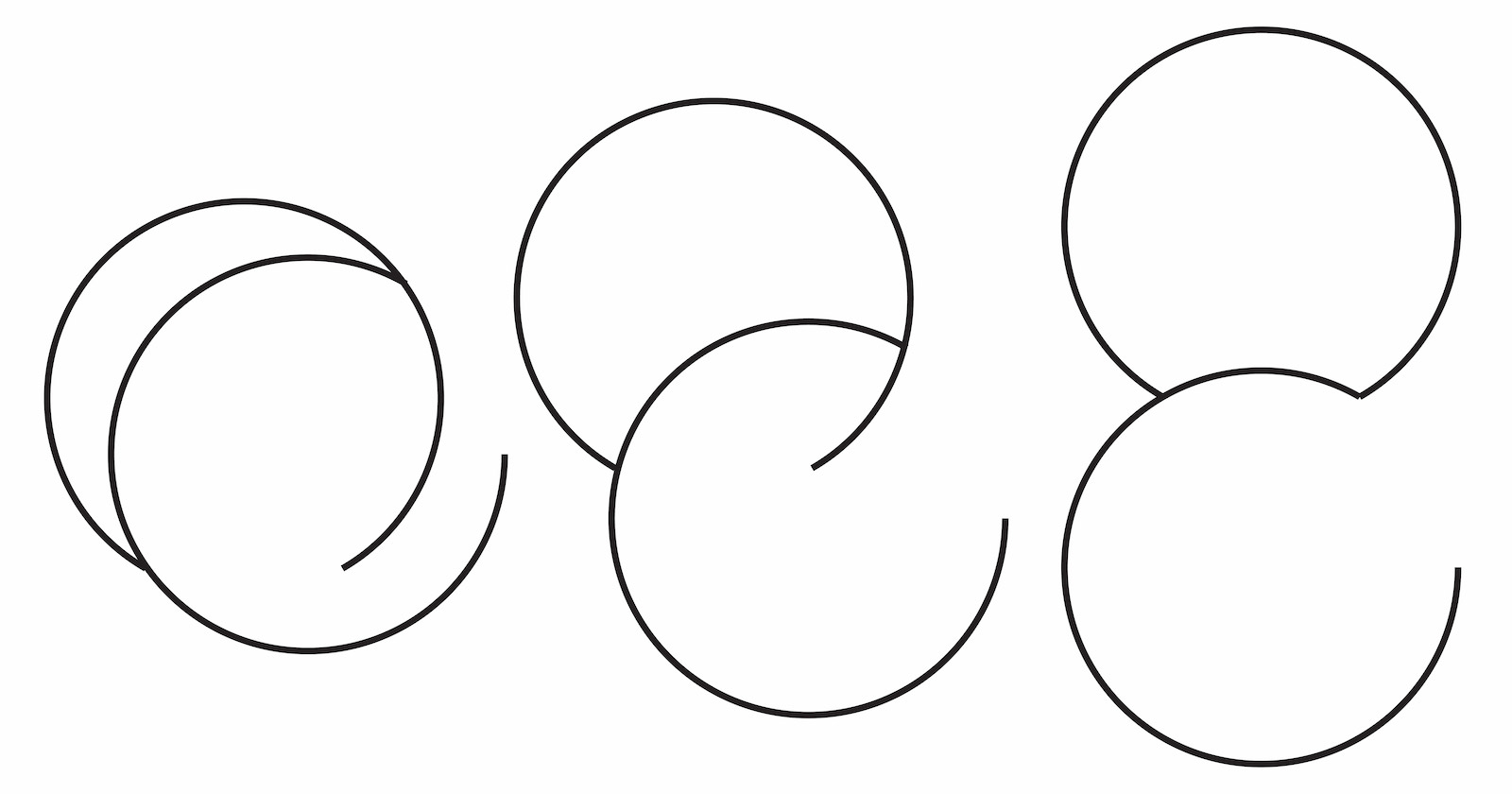 As shown above, this allows us to pack three of these broken circles together, creating a mild form of prettiness.

Now let’s use four broken circles, with a quarter removed each, rotated by 90º, and colored appropriately: 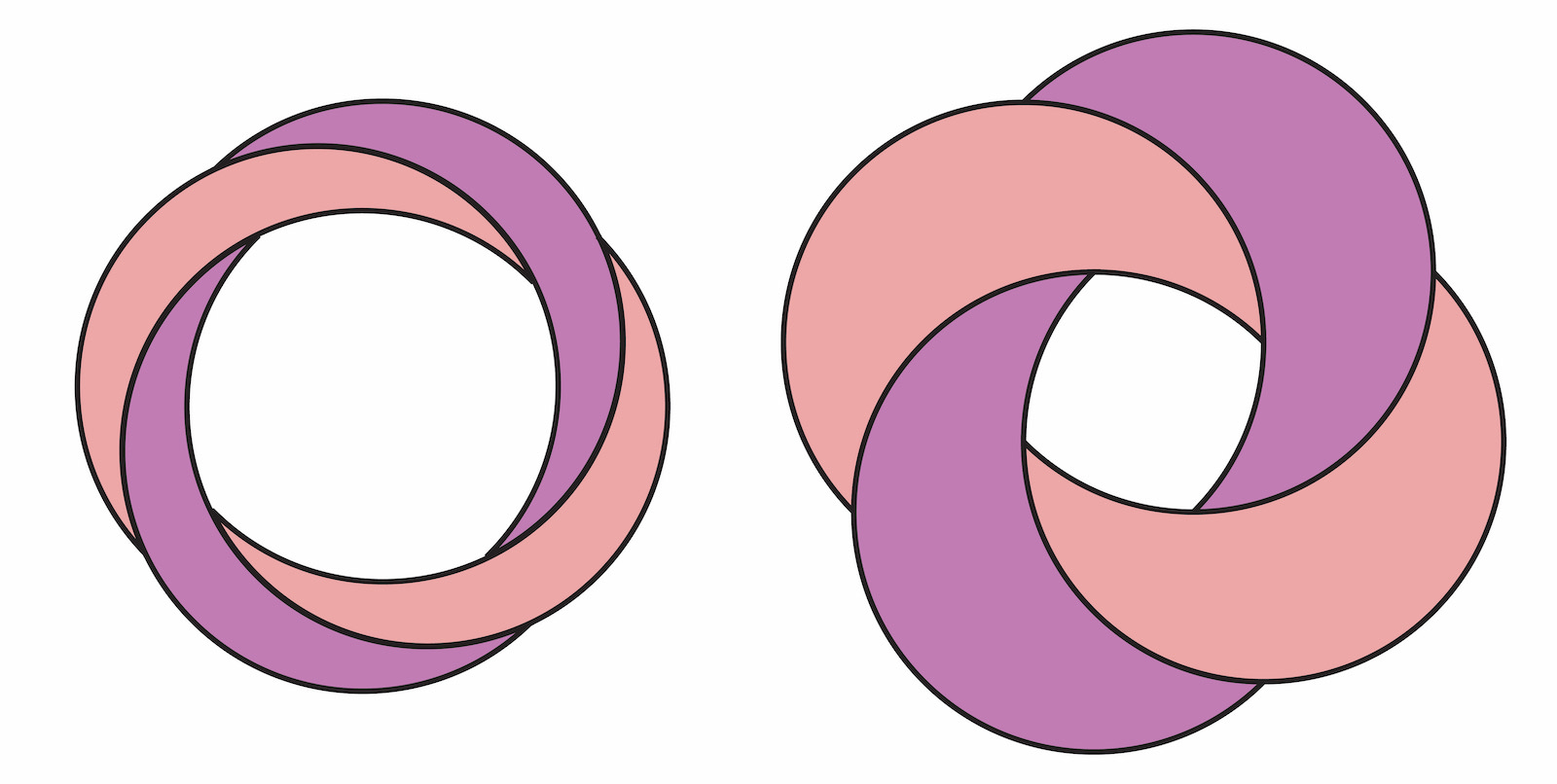 Again, one can slide these circles along each other. Can you do this with six broken circles? Does this work with other angles?

Mona Hatoum’s impressive installation of this name was shown in the Diversity United exhibit in Berlin this year, and the catalogue speculates that what we see here are the ghost-like fragments of a house.

I saw these hanging concrete pieces as probes into space, an attempt to make visible what has disappeared.

In this reconstruction, I am using PoVRay to probe textured space. A texture in PoVRay is function of the three spatial coordinates whose values is used in a color map to determines the color value of an object at the point given by the three coordinates. Above the function is sqrt(x2+y2+z2), and the color map a simple grayscale gradient, so that spheres centered at the origin have the same color value. Objects placed into the scene appear to be carved out of this space.

Above is a more complete reconstruction of Haroum’s installation, using the same spatula texture with added reflection. And below are the same probes, using an entirely different texture based on the function sin(x)+sin(y)+sin(z).

I have written before about Two Lake Trail in southern Indiana, a 13 mile loop.

Here we are at the end of summer, colors haven’t changed yet from uniform green&brown to the fall display of everything.

The safest way to deal with this is to ignore the colors. And, while we are at it, also to ignore sharpness and depth of field, as that might reveal how all this here really looks like.

If you remove color and use blurry images, it’s not so bad anymore.

Even the very smelly drainage from one of the two artificial lakes starts to look compelling.

And see, Indiana does have mountains.

What we see here is the esthetics of stuff. With open eyes, such pictures are possible everywhere.

All that really matters are contrasts. Is that what we really want?

Black/White, Vaccinated/Not Vaccinated, is that what we have become?

I had this trail all for myself. Except for the bugs and spiders, of course. Where are my fellow humans?

The standard route to Mount of the Holy Cross begins at Half Moon trailhead and leisurely climbs up to Half Moon pass.

Starting early (5am) gets you to the pass at dawn with magnificent views back.

The other side of the pass reveals the mountain and the prospect of a long and steep climb. Before that, you’ll have to descend 1,000 feet, losing almost all you had gained before.

Eat breakfast at sunrise among wildflowers on the north slope.

Despite its harshness, there is vegetation all the way to the top.

Then you begin an eternal climb on a well-maintained trail.

Just before the final & rugged ascent, there is a long and eery horizontal ridge. Nothingness can be beautiful.

The summit itself is a nice plateau with breathtaking views. If you have breath left.

From here, it all looks very gentle and easy.

On the long way down don’t forget to save some energy to climb up to Half Moon Pass again.